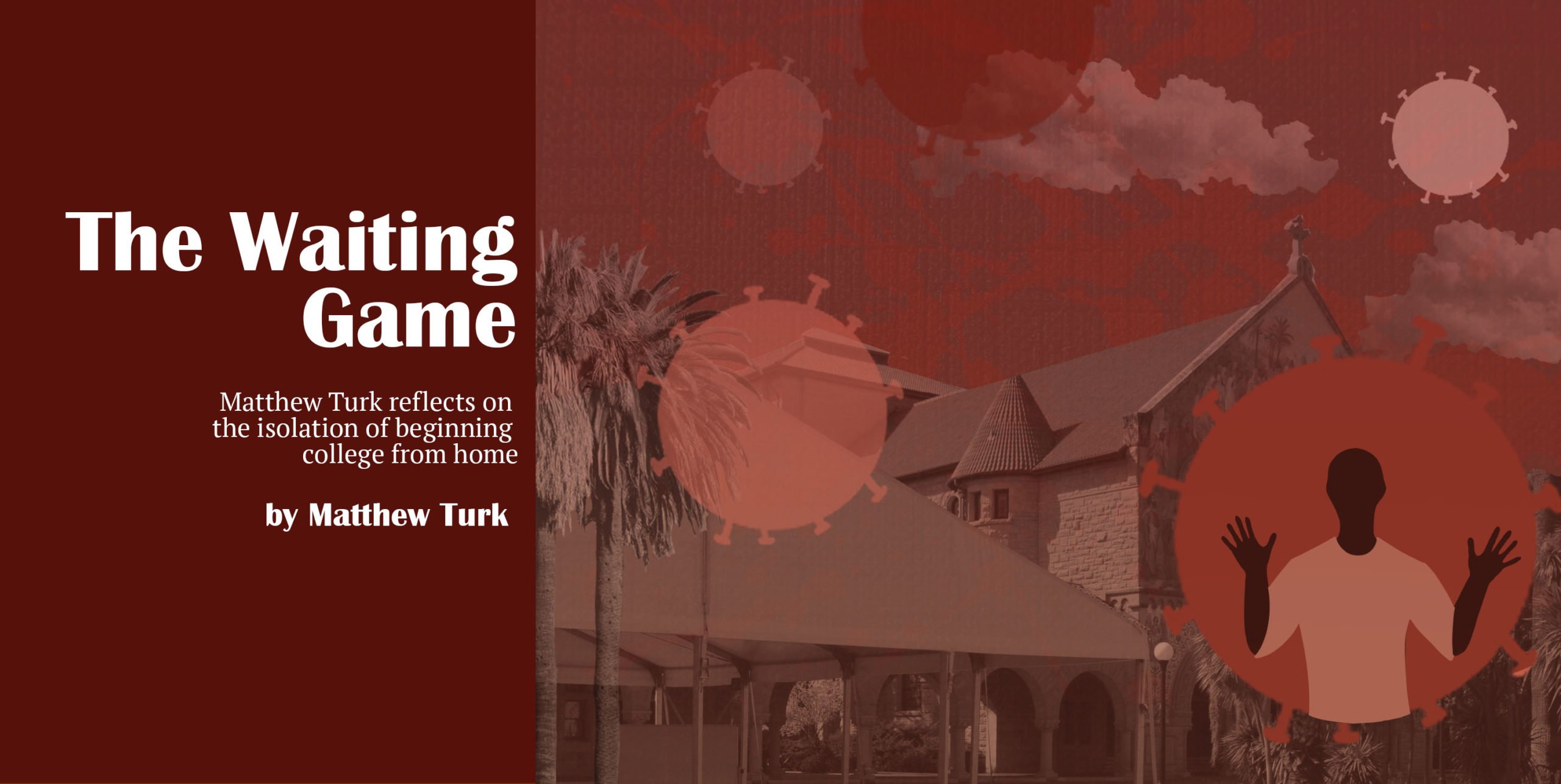 To many, autumn quarter was a broken promise. No, all of 2020 was a broken promise. In January of that year, no one could have predicted the severity of the pandemic that we now live with every day, and after the news that the University would not invite frosh and sophomores to campus for winter, the transformative experiences that come with being a college student quickly descended into scraps of what they could have been. Student organizations are struggling to adapt, social connections are watered down and the duration of this state is indefinite. During fall quarter, an investigative design project inspired The Daily to conduct a survey seeking to better understand loneliness at Stanford during quarantine. Responses ranged from accounts of changes in daily routine to coping strategies to unexpected moments of joy.

As with many frosh this year, my high school graduation in 2020 was a livestream. It’s a strange story that I will tell for the rest of my life, sitting there in my living room with my family, staring at a screen. I was wearing a school-shipped cap and gown, but the event ended up being too anticlimactic for the outfit to be worth it. But this was merely the final symptom of the shadow cast by a lost senior year, and students must carry the baggage as they attempt to move on to their next destination in life. The problem is, there isn’t any moving on in this world. There is only the waiting game of wishing this pandemic to pass by so that we can get on with living real life.

“What is real life?” you could ask. Real life is limitless with possibilities. Before the pandemic, I could let my imagination run wild with the wonderment of where I was going to study, where I was going to get my coffee, where I would go on runs or hold resonant philosophical conversations with new friends. I was going to explore campus, learn all about the driving range, the Automotive Innovation Facility and performing arts groups.

But it’s not about me or frosh in particular. It’s about the entire Stanford community and the world at large that has suffered, and the wartime rhetoric used in the spring simply isn’t working now, despite new variants in the country. Even those who willingly quarantined in spring are struggling to resist the very human urge to reunite with others, and at Stanford specifically, there have been 356 recorded cases among students, faculty, staff and postdoctoral scholars as of March 9. For me, virtual school, internship applications and extracurricular activities have kept me busy, but to a fault. Unhealthy as it may be, immersing myself in work is one of the only coping mechanisms that I always can count on. And in this behavior, I am not alone.

One way that many students have outmaneuvered loneliness is by forming social pods, in which a small group of people lives in a self-contained “bubble.” Emily Jusuf ’20 said that she plans to live with three of her friends in a location near where she will work in-person for a mental health organization.

Jusuf mentioned that being in close quarters with others can have its ups and downs. The human contact is a psychological benefit as much as it can be a threat if someone becomes sick. Moreover, it’s still possible to have a fear of missing out even in a social pod, since, as Jusuf said, there’s always the thought that others are connecting more deeply than you are. And there are logistical issues to be sorted out, too. “For example, if only one person or two people know how to drive,” Jusuf said. “It can be a big burden for them, or if you have questions like, ‘Who’s going to make food?’ It can easily become a burden on a few people, if some people are pulling their weight.”

There is a tradeoff, in some cases, between health and happiness or satisfaction, and while many may publicly denounce those who have not adhered to guidelines, it can be hard to blame them. For instance, when the Los Angeles Dodgers won the World Series last year and third baseman Justin Turner was criticized for celebrating on the diamond despite knowingly having COVID-19, I had a hard time jumping on the bandwagon. Honestly, I speculate that most people in his situation would have done the same thing. At worst, it’s a game of odds with potentially dangerous public health consequences. At best, he had worked his entire life for a moment like that, and he wanted to share the moment with those closest to him.

More and more, I see people adopting this mentality. Worldwide, people are grappling with lost chances to bid farewell to an aging relative, seize the next step in a career progression or pursue the promise of a romance. These events might only come once, and I wouldn’t be surprised if many people started to go “screw it” and resume their lives. “Besides,” they might say, “it won’t happen to me.” When something as chronic and destructive as this virus continues to carry on for an indefinite time, it’s definitely likely that people will fall into the trap of optimism bias, believing that it will always be “somebody else” who gets infected, not them. Regardless of when a vaccine comes along, people have demands and desires and won’t wait to act on them. There’s only so much bandwidth that a human has for living with these unnatural behaviors. As Jusuf put it, “You almost can’t even see the effects of all the efforts that we’ve been putting into distancing ourselves because people are getting tired.”

It’s fair to call this situation “working from home,” but it’s probably more accurate to call it “living at work.” A common link between our respondents seemed to be a sense of redundancy throughout the days, long durations of isolation and lack of inspiration or balance. Sometimes it is easy to go days without spending time with those closest in social circles. The pandemic does limit many things, but it also enables several behaviors that would otherwise be on the fringes.

In a remarkably short period, we have adopted new ways of going about our daily lives and interfacing with one another, and it draws attention to the question of whether we will ever unlearn the pandemic. I think about it in similar terms to the Great Depression. When I was in high school, I learned about my teachers’ grandparents who lived during that time. Even into the present day, they would keep savings jars around the house and reuse disposable plastic wrap as they used to back in the day. Decades from now, for example, are people going to still be reflexively or subconsciously refusing handshakes? Maybe not. In many ways, we will go back to the status quo eventually, but in a significant number of regards, I don’t think we’re going to return fully to January 2020 in this lifetime. An irreversible cultural shift is happening before our eyes. Change is inevitable, and admittedly, it is hard not to look back at the beginning of 2020 somewhat sentimentally, but hindsight is 20/20 and with many events, the full appreciation doesn’t necessarily have to take place in the moment.

We can still savor those moments and keep an eye on the future. Of course, this is difficult for anyone. I know so many people use different physical environments for inspiration and novelty, and when that’s taken away things can look abysmal. But I hope that despite our physical world, students can remember that the mind is limitless. The way that we interface with reality was never purely physical. The mind is and has always been immaterial. Even though “physically distant connections” sound like an oxymoron, there will be nuggets of joy that come along that can be stimulating if not as stimulating as before. We have heard it so many times: the people of Stanford make the University what it is, so there is at least the solace that that essence will be preserved, through good times and bad. The positive, interpersonal stimulation that we all yearn for may not come by often, but when it does, that’s the time to savor. Remember, this time is full of ups and downs, not one or the other alone. Even as schools begin to open ever so slowly, the ups may not be as frequent as we’d like, but when they come, the novelty of that increasingly rare joy can be more potent, I have found. And that is distinctly special.

Contact The Daily’s The Grind section at thegrind ‘at’ stanforddaily.com.