On Saturday, the Associated Students of Stanford University (ASSU) elections commission announced the results of the 2018 elections. The Shanta-Rosie slate, including Shanta Katipamula ’19 and Ph.D. candidate Rosie Nelson, won against the Khaled-Ocon slate to become the 2018-2019 ASSU executives.

The 15 members of the forthcoming 20th Undergraduate Senate were also selected from a total of 22 candidates.

The elections commission also announced new class presidents and next year’s Graduate Student Council members. 76 out of 80 annual grant and special fee groups were approved. A referendum advocating fossil fuel divestment passed in both the undergraduate and graduate bodies.

“We are grateful for the trust and confidence the student body has placed in us by electing us to be the next ASSU Exec,” Katipamula and Nelson wrote in a joint statement to The Daily “Thank you to everyone who believed in our campaign and our message of uplifting student voices to the decision-making table. We can’t wait to get to work and deliver on our campaign promises.” 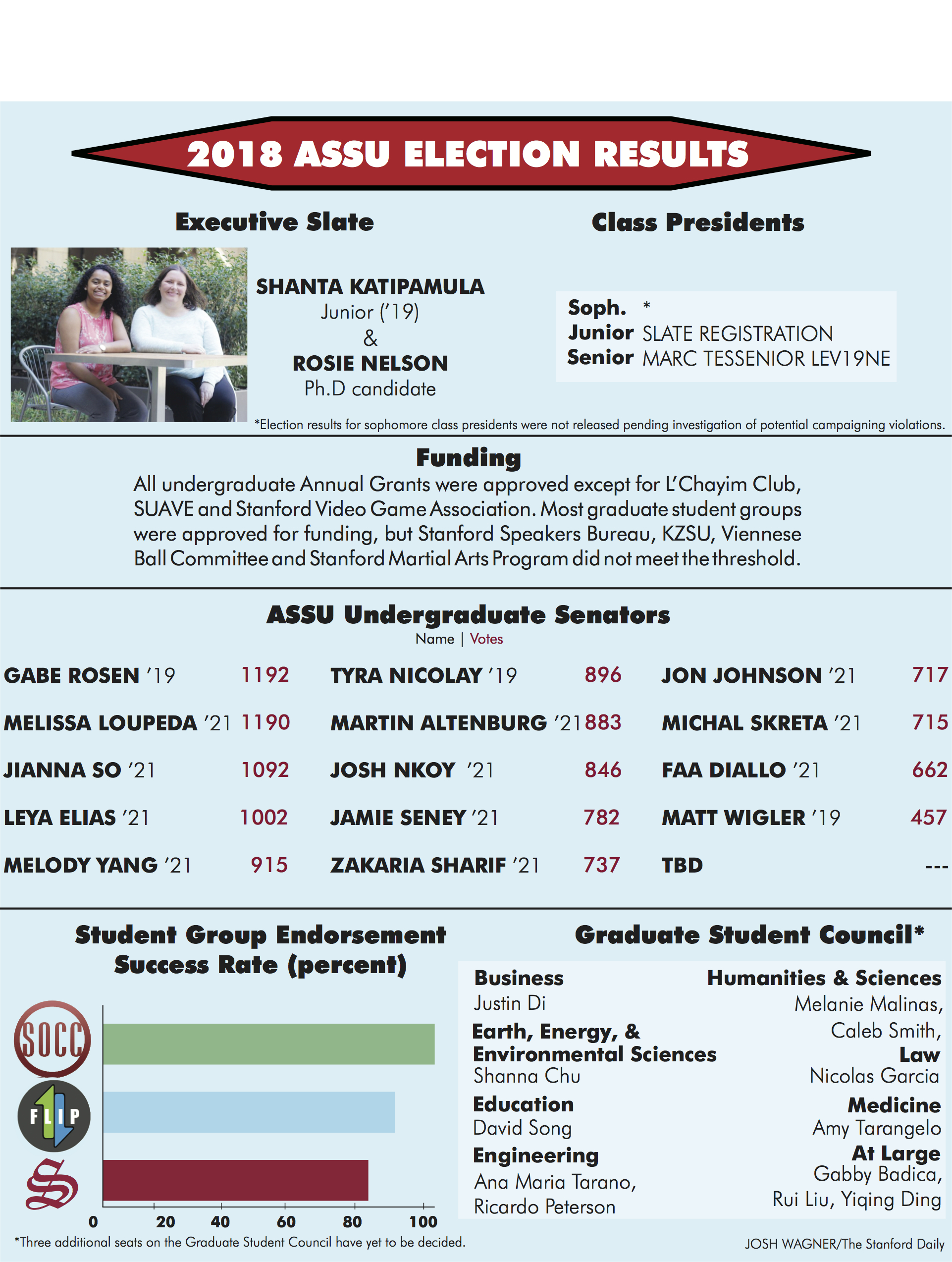 The Shanta-Rosie slate — which was endorsed by the First Generation and/or Low Income Partnership, Stanford Daily, Stanford Bioscience Student Association and the Biomedical Association for the Interest of Minority Students — won with 61.92 percent of the vote, beating the Khaled-Ocon slate by 34.6 percent. They also beat the Associated Students of Stanford “joke slate,” which featured John McNelly ’19 and Cale Lester ’19.

Katipamula and Nelson ran a campaign based around bringing together undergraduate and graduate students, with the slate itself featuring one of each. They also emphasized their ability to work within the larger institution of Stanford, with a campaign statement that described “working relationships with the highest levels of Stanford’s administration” and a website that highlighted their past work in student government (Katipamula being a former senate chair and Nelson currently a GSC co-chair).

One particular policy area which they disagreed with the Aounallah and Ocon on was about the presence of undergraduate students on Title IX panels. During the executive debate a week earlier, it had emerged that Shanta-Rosie opposed adding an undergraduate panel member (due to worries about adequate training for them), while Khaled-Ocon were in favor of adding one (in the name of representation for all affected by the panel’s verdicts).

Some candidates campaigned individually, while others joined forces and ran in coalitions. These included A2, Morfin/Diallo, FAM and S.I.D.E. (Students for Inclusion, Diversity and Equality).

The ASSU Elections Commission announced that the following candidates were elected to the 20th Undergraduate Senate. In descending order of votes, the winners are:

Gabe Rosen ’19, who promised to increase transparency about Senate meetings as well as support the rights of service workers and course fee reductions. Elected to his third term, Rosen was the only incumbent who sought another term. He received 1,192 votes.

Jianna So ’21, who championed diversity and service workers in her campaign, as well as proposed changes to the way Stanford addresses sexual assault. So received 1,092 votes.

Martin Altenburg ’21, who promised reforms to the admissions system and community centers, as well as championed programs for first-generation and low-income students. Altenburg received 883 votes.

Josh Nkoy ’21, who campaigned on a platform of common sense, promised to establish new outreach programs, make Stanford a sanctuary campus and pave the way for divestment from
fossil fuels. Nkoy received 846 votes.

Matt Wigler ’19, who proposed to initiate a student-centered cardinal conversations program, advocate for a Disability Studies minor and alleviate financial hardships on students through subsidies. His platform also expressed support for Israel and opposed the Boycott, Divestment and Sanctions movement. Wigler received 457 votes.

Wigler received fewer votes than five rising sophomores who sought office, but was elected over them because of an ASSU bylaw that mandates that at least three undergraduate senators be upperclassmen.

The Council determined that the bylaw only applied in elections, not in single-seat vacancies. Ford retained her seat.

The joke candidate Emperor Palpatine (also known as former Tree Sam Weyen ’18) received a sizeable 656 votes, which would be enough to win him a seat on the Undergraduate Senate. However, the Elections Commission noted that “verification of future undergraduate enrollment [is] required before [his] confirmation by GSC and Senate.”

Rodolfo Salazar ’21 is reported to have the next most amount of votes after Palpatine.

All of the senatorial candidates endorsed by the Students of Color Coalition (SOCC) were elected to the Undergraduate Senate. However, the Khaled-Ocon slate, which SOCC also endorsed, was not elected. This fact is unusual given that SOCC endorsements have historically poised candidates for successful outcomes.

The elected Senators serve at-large on behalf of the student body in one of the ASSU’s six committees: Advocacy, Academic Affairs, Administration and Rules, Appropriations, Communications and Student Life.

The only slate running for junior class president — consisting of Izzy Angus ’20, Will Kenney ’20, Leila Mengesha ’20, Sofia Dudas ’20, Cameron Woods ’20 and Marco Lee ’20 — was also officially elected on Saturday. The slate emphasized accessibility as one of its primary aims, and also promised to offer a wide variety of event programming, volunteer activities and opportunities student-faculty interaction.

All 71 undergraduate student groups who applied for Annual Grants were granted funding. Three groups — L’Chayim Club, SUAVE and Stanford Video Game Association — were originally listed as having not been approved, but the results were updated afterwards to reflect that they had, in fact, received funding.

In addition, 5 of the 9 graduate student groups were approved for Special Fees. The four groups which did not meet the threshold were Stanford Speakers Bureau, KZSU, Viennese Ball Committee and Stanford Martial Arts Program.

The graduate community also elected representatives to their legislative body, the Graduate Student Council (GSC). According to the ASSU, the GSC includes 15 voting members — 10 of whom represent Stanford’s seven schools and five of whom are at-large representatives.

Gabby Badica, a graduate student in Iberian and Latin American Cultures who is currently an incumbent on the Council, won the at-large GSC positions.

Rui Liu, a Ph.D. Candidate in Electrical Engineering, and Yiqing Ding, a masters student in Engineering, were also elected as at-large representatives.

Melanie Malinas, a fourth-year Ph.D. candidate in biophysics, will represent the Natural Sciences graduate district. Having run unopposed for her second term on the Council, Malinas was endorsed by the Stanford Bioscience Student Association and the Stanford Biomedical Association for the Interests of Minority students. In her first term, Malinas has worked on issues ranging from financial literacy to mental healthcare.

Caleb Smith ’17, currently a coterm in Public Policy, was elected as Social Sciences district representative with two write-in votes — despite the fact that he is graduating this year. Smith, a Daily staffer, said he was “honored and, most of all, surprised.” Smith did not run for the position.

“I look forward to spending my one and a half remaining months at Stanford on the GSC working to fix our student group funding system and pressure the administration to develop campus in a prudent and equitable manner,” he wrote to The Daily.

This article has been updated to reflect additions to the Graduate Student Council election results and the passage of the Fossil Free Stanford referendum.

Brian Contreras was the Daily's Investigations Editor during the '19-'20 school year. Before that, he was a Managing Editor of the news section. A graduate of Stanford's class of 2020, he studied Science, Technology, and Society with a minor in Anthropology. Brian hails from Washington, DC and is pursuing a career in tech journalism. Contact him at briancontreras42 'at' gmail.com.Courtney Douglas studies English, Political Science, and Ethics in Society at Stanford. A proud member of the Class of 2020, she served as Editor-in-Chief of The Daily's 254th volume. Her favorite poem is "To Be of Use" by Marge Piercy, she has a tattoo on her left ankle, and she wants to be a press lawyer. Her favorite journalists are Hannah Knowles and Alexa Philippou. Send her recommendations for leave-in conditioner and gravesites of relevant literary figures at ccdouglas 'at' stanford.edu.Yasmin Samrai ’21 is a Desk Editor for Local. She hails from London, UK. She loves traveling, listening to 80s music and sipping Earl Grey tea. Feel free to ask her about her favourite James Bond or talk politics. Contact her at ysamrai ‘at’ stanford.edu.Claire Wang is The Daily's Vol. 254 magazine editor, and previously served as Vol. 253's managing editor of news. She's a fan of anything with tomatoes in it, and her favorite poet is Ocean Vuong. When she's not biking, her second-favorite mode of transportation is by rollerblade. Contact Claire at clwang32 'at' stanford.edu.