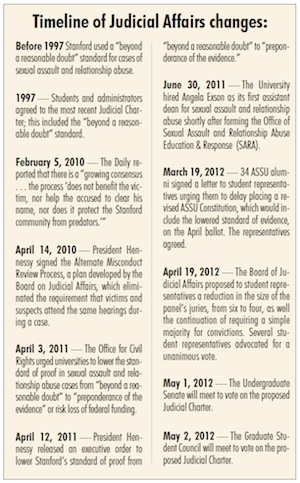 Correction: The original version of this article misidentified Daniel Barton as David.

The ASSU Undergraduate Senate will debate whether to approve the Office of Judicial Affairs Alternative Review Process (ARP) for cases of sexual assault, relationship violence and stalking at tonight’s meeting. The ARP, instituted in 2010, is facing its two-year review and requires approval from the Undergraduate Senate and the Graduate Student Council (GSC) to continue.

The ARP includes two significant changes: shifting the standard of proof from “beyond a reasonable doubt” to “preponderance of evidence,” meaning jury members must be 51 percent certain of guilt to convict, and shrinking review panel juries from six members to four. These changes have raised concerns that the current system of convicting based on a majority is not sufficient, and both student representatives and alumni have recommended moving to requiring unanimous agreement on review panels.

The Office of Judicial Affairs (OJA) initiated the ARP as a pilot program in 2010 with the objective of making the judicial process more accessible and less intimidating for victims of sexual assault. Its development was partially in response to OJA data indicating that in the 13 years preceding 2010, there were 104 reports of sexual assault at Stanford, yet only 16 of those cases were reported to the Judicial Office and only three went to hearing. In comparison, statistics from a two-year study from the National Institute of Justice, cited in the 2011 Dear Colleague Letter from the Office for Civil Rights, predicted that over 650 female and 200 male students at Stanford have been sexually assaulted, a number far higher than report and trial rates.

“There was concern that the Judicial Process was a deterrent to victims of sexual assault, sexual harassment, dating violence and stalking,” Jamie Pontius-Hogan, assistant dean of the Office of Judicial Affairs, said in an email to The Daily.

“It surprises me that Stanford students would want to consent to a change in the rules that gives them less rights in a University disciplinary hearing,” said Daniel Barton, who has been a criminal law attorney for 23 years and has defended Stanford students in judicial proceedings. “People … have confidence that the University will use that power wisely and that they’ll never be on the wrong side of it. And that’s a delusion.”

Since the establishment of the ARP, there have been 21 cases of sexual assault reported on campus, 13 transferred to ARP and 12 tried. Of the 12 hearings in the past two years, 10 plaintiffs were found responsible, though one verdict was reversed in appeal. Pontius-Hogan said that the OJA has not found a higher proportion of students responsible since the burden of proof was lowered to a preponderance of evidence standard; she attributed the increase to the success of the ARP. The burden of proof was lowered midway through the ARP trial period.

“Of course they are going to get more cases if they don’t have to have the same level of certainty,” Barton said, “but people do get falsely accused. If there is a preponderance of evidence test, people will be falsely convicted, falsely suspended, falsely expelled. That’s the cost of a system that appears more efficient.”

On April 12, 2011, six days after he received a letter from the Office of Civil Rights, President Hennessy employed his authority to override the existing Judicial Affairs charter and ASSU Constitution — both of which protect the rights of the accused to face their accusers, be free from double jeopardy and remain innocent until proven guilty beyond a reasonable doubt — to revise the ARP and accord it with the federal guidelines.

According to the Office of Judicial Affairs, Stanford was one of only two or three universities to still use a burden of “beyond a reasonable doubt” in cases involving sexual assault. Even so, concerns remain over the ARP guidelines.

“Many of the Stanford sexual assault cases are cases that are very ambiguous and involve confusion and alcohol, and are cases that are very hard to prove beyond a reasonable doubt standard,” Barton said. “Most of the cases that are charged with sexual assault on campus end up being rejected by the police and the district attorney, but they are properly rejected … because you shouldn’t be imposing either a criminal sanction or an exclusion from the University unless there is a reliable way of determining what occurred.”

ASSU Senator Dan Ashton ‘14 also voiced opposition at the Senate’s April 24 meeting to the ARP’s protections for the accused. He noted that only six of the twelve rights of the accused currently guaranteed in the ASSU Constitution are protected by the ARP.

“I feel that you have a right to call witnesses and have your witnesses heard,” Ashton said. “I don’t understand why they would say you are not obligated to meet with witnesses they want to call. That doesn’t make sense for our legal system.”

Proposed changes to the ARP

Recent Senate meetings have been dominated by extensive debate about the Alternative Review Process (ARP) and its approval. Since the ARP has only been operating as a pilot program, it must be approved by both the Senate and GSC in order to continue.

The first proposed change voiced by undergraduate senators concerns increasing the number of reviewers on a panel from four back to six. While all other OJA proceedings have six sitting reviewers, the ARP has only four.

“If you’re going to decrease the panelist number from six to four, I think … because of that reduction, there should be an increased level of requirements,” Senator Ben Laufer ‘12 said in support of a larger panel. “I don’t know if having two more people would really dissuade people from taking action. I think there is, at least in my mind, a big difference between having 3-1 and 4-0.”

“[We chose four] out of concern for the comfort of both parties, and extreme concern for [their] privacy and confidentiality,” Pontius-Hogan said. “Also, most people on the board felt strongly that it should be student centered and having four we were able to have three students and one faculty or staff member, which felt like a good balance.”

Disagreement exists within the Board on Judicial Affairs as to the proper size of the review panels.

“Because we’re all presumed to be innocent, I don’t think you should force any responding student to have to overcome that burden on a 3-1 vote, to force him on the first round to convince two out of four people, I don’t think that’s fair,” said Timothy Lau J.D. ‘12, member of the Board on Judicial Affairs, at an April 18 gathering of student legislators.

The second proposed change, which the OJA decided not to endorse after extensive discussion, is requiring a unanimous rather than majority vote to find a student responsible. According to the OJA, no other disciplinary process at Stanford requires a more-than-majority vote, but, as The Daily previously reported, more than twice as many states require unanimous agreement for civil cases than require three-quarters agreement.

Law Professor Michele Dauber said that she thought the language of those supporting unanimity seemed to run contrary to the intent of the Office of Civil Rights.

“It’s been said with a high degree of explicitness … that it looks like Stanford is trying … to evade what the Department of Justice is trying to accomplish,” she said at the April 18 gathering.

Dauber and members of the Office of Judicial Affairs, who said that the ARP is “data driven,” also oppose the change because they believe that, coupled with the recent changes to accord with the Dear Colleague Letter, the effects of policy change cannot be distinguished if the variables are not changed incrementally.

“It’s not like a typical civil suit where you are just paying damages, or just like refrained from seeing someone,” Lau said. “When you get suspended for two/three years from Stanford … and you are labeled … a perpetrator of sexual assault by Stanford, it is something that goes with you for life. The punishment itself, while not entirely civil, has a criminal dimension to it. I think Stanford ought to be very careful before putting something like this on someone, that we do this process fairly.”

“Agreeing with the ARP as is basically states it is perfect,” de Ridder wrote.

“Amending it, on the fly, when approving it, is nonconstructive, because many bodies need to agree on the ARP. Providing a set of opinions is the responsible thing to do, as it would give the BJA resources and incentives to carefully review the document. … There is time to raise issues, because the Faculty Senate will not take this up till fall, and the pilot study has been extended till then.”