François Hollande defeated incumbent Nicolas Sarkozy to be elected as president of France on Sunday, an outcome predicted by panelists at a round table discussion about the French presidential election Friday in Encina Hall.

“No matter who wins the election, we’re heading towards very difficult times in France,” said Laurent Cohen-Tanugi, a visiting lecturer at Stanford Law School and an international lawyer.

The panel’s speakers pointed out a trend of French voters rallying behind extreme left- or right-wing parties, who represent anti-establishment, anti-globalization and a general distrust in the European Union (EU). They agreed that this trend was true for the election in general. 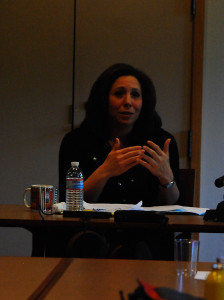 “This is clearly an election against Sarkozy rather than a vote for Hollande,” Cohen-Tanugi said.

He added that Hollande, who will be the first member of France’s Socialist Party to become president since François Mitterrand left office in 1995, “has been very successful at playing this game, positioning himself as pro-growth and pro-spending while making Sarkozy appear as an advocate of austerity and welfare cuts.”

Jimia Boutouba, assistant professor in modern languages and literatures at Santa Clara University, agreed that the French almost seem unworried about the future, but focused instead on getting Sarkozy out of office.

“The nation is more and more defined by what it opposes,” he said.

The panelists discussed what Hollande’s election would mean for the future of France.

“If Hollande is elected, he will have to face the test of the financial markets, in view of his electoral promises and his position on the European fiscal compact,” Cohen-Tanugi said.

Arthur Goldhammer, senior affiliate at the Center for European Studies at Harvard and renowned blogger about French political culture, said it would be difficult to act on the current opposition to transnational unions such as the EU in France.

“It is unrealistic and misleading to believe that France could leave the Union,” Goldhammer said.

When asked about the how Franco-Germanic relations would survive the break-up of the “Merkozy” couple – referring to the close relationship between German Chancellor Angela Merkel and Sarkozy – Cohen-Tanugi said he is optimistic.

“The Merkel-Hollande couple would probably fall into place,” he said. “It will work out like these things always do.”

Goldhammer’s view of the future, however, was less bright.

“Hollande is looking for no more than symbolic concessions from Merkel,” Goldhammer said. “But Europe needs more than that to fight the Euro-crisis.”

Goldhammer said another problem that France is currently facing is the integration of its immigrant population.

“The presidential debate has all been about immigration figures and not enough about the integration of these very immigrants,” he said.

“Second and third generation immigrants usually abstain [from elections] since they are alienated by the political discussion,” Boutouba added to Goldhammer’s comment. “This silence is one of the main reasons [behind] Marine Le Pen’s 18 percent of votes, almost 6.4 million people.”

Le Pen, a far-right leader of France’s National Front party, placed third in the first round of the French presidential election.

Cohen-Tanugi, however, said that “if the polls turn out to be true, Hollande’s victory may well lead to the implosion of the right.”

FSI Europe Center Associate Director Roland Hsu said he was pleased with the turnout to the round table discussion.

“At the Europe Center, we always try to make as comprehensive an event as possible, interesting both for faculty and staff, but also mainly for undergraduates,” Hsu said. “We are really happy that so many students actually showed up.”