When the Cardinal football players trotted off the University of Phoenix field in January, two different blows were dealt to the Stanford faithful. Losing the Fiesta Bowl to Oklahoma State was the immediate sting, but losing once-in-a-generation quarterback Andrew Luck to the NFL was, in the big picture, the deeper wound. The inevitable question that no one was concerned with suddenly surfaced as one of the most pressing dilemmas for the future of Stanford football: Who’s going to replace number 12 at starting quarterback? 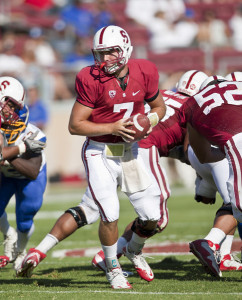 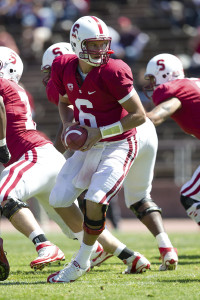 Fast-forward to August, and that all-important question remains unanswered with the season opener against San Jose State just over two weeks away. But decision time is looming. After Saturday’s open practice that consisted of a short scrimmage, head coach David Shaw stated that the starting quarterback would hopefully be chosen sometime this week.

“I didn’t want to make a quick decision,” Shaw said. “I wanted to go as long as possible, as long as prudent, because that way we get to see as much data as possible. I wanted to make sure the quarterbacks worked hard all summer knowing that they were coming in with competition and give them at least two weeks to get after it and show us everything they have.”

Nottingham played in six games last season, mostly performing mop-up duty behind Luck. In those appearances, he completed five of eight pass attempts for 78 yards and a touchdown. While playing under center for Monte Vista High School in Danville, Calif., he was a four-star prospect and one of the top high-school, pro-style quarterbacks in the country—ranked as high as fourth by Rivals.com.

Nunes saw action in four games during the 2010 season as the primary backup quarterback on the depth chart, completing one of two passes for seven yards against Wake Forest. The 6-foot-4 Upland, Calif., native, who be will be entering his fourth collegiate season, was also a four-star recruit and ranked the 13th-best pro-style quarterback in high school by Rivals.com.

As former backups, both players voiced great appreciation for the valuable learning experience of playing behind Luck.

“That’s the beauty of what we have,” Nunes said. “I was behind Andrew for three years, which is one of the biggest blessings you can have. Seeing how he handled it from a mental standpoint as well as a physical standpoint was huge. You can look at these drills [in practice] and see what kind of attitude he had coming in, and you try to replicate that.”

“I tell myself if I don’t think about what Andrew did these past two years, I would’ve taken them for granted,” Nottingham noted. “I learned so much from sitting behind him and I try to play through him vicariously. I saw all the amazing things he did. So when I’m preparing now, I try to think about what he would’ve done.”

Given that the Stanford offense contains nearly 300 plays, mastering the voluminous playbook is a quarterback skill that is as important as it is challenging. But both quarterbacks expressed confidence in their understanding of the plays. Nunes believes that knowing the playbook is one of his “strong points” as he has it “pretty down pat.” Although Nottingham has one less season under his belt than Nunes, the redshirt sophomore “feels leaps and bounds more improved” from where he was last year and has become “very comfortable” with the playbook.

With the quarterback race going right down to the wire, the intensity of the atmosphere can hardly be downplayed. Yet the competition also hinges on a tremendous sense of mutual respect between the two players.

“It’s been healthy competition,” Nottingham said. “We all understand at this school we want to be competitive, not combative. We know not to take anything personally. I don’t want to be tense because if you play the quarterback position, you can’t be tense. You try to control the things you can control.”

“Brett’s a great competitor and it’s a really great opportunity,” Nunes said. “It’s made us better competitors on the field and made us that much more focused in the meeting room. It’s like what [former Stanford head coach Jim] Harbaugh would tell us: Iron sharpens iron. That’s the attitude that we’ve taken.”

Both players have also shown a great level of humility throughout preseason camp. Nottingham acknowledges that he hasn’t “arrived” as an “established player” yet, while Nunes recognizes the importance of improving on timing routes with his wide receivers and tight ends. And though they are the two favorites in the pursuit for the starting role, redshirt freshman Kevin Hogan has recently emerged as a dark-horse candidate.

“Hogan is trying to make it a three-man race,” Shaw said. “I wouldn’t say he’s quite there yet, but he’s not too far behind. He’s making it more cloudy, which is good.”

When asked who he thought had a better command of the offense, Shaw said, “I would’ve said Josh early, but I think in the last couple days, all three guys have shown great command of what we need to do.”

Shaw made it clear that the Cardinal will not adopt a rotation system for the position, which would involve the quarterbacks splitting playing time, at least early in the season. Picking one quarterback remains a difficult task, but time is running out.

“The decision is going to be tough,” he said. “But we’ll weigh all the information and look at the film and the notes. And when it’s time, we’ll make a decision and move on.”

Regardless of which player will be chosen to start, he won’t be expected to control plays at the line of scrimmage to the same extent that Luck did as master of the offense.

“That last 25 percent where Andrew could do whatever he wanted at the line of scrimmage, [the new starter] won’t have that,” Shaw said. “We’re going to set parameters and progressions for him to follow.”

But even with those limitations in place, the coaching staff is still holding the competing quarterbacks to a high standard during the preseason and beyond.

“It’s about executing the offense,” Shaw said. “We can’t shrink the offense. We’re not going to put on our starter—whoever it is—what we put on Andrew. But at the same time, that guy has to be able to run the offense. He has to get us to the right protection, to the right running play, and when a [receiver] is open in a passing play he has to hit him. The combination has to be consistent.”

The starting quarterback this season might not be the next number 12, but he will be the player chosen through the methodical selection process that Shaw and the coaching staff have implemented. Whether it’s Nottingham, Nunes or Hogan who’s named as the successor, the reins of the Cardinal offense will assuredly be passed to a quarterback who has already been heavily tested by the intense competition for the job.

That gives Stanford football as good a chance as any to win come game day.

Aug. 2: For outside linebacker Kevin Anderson, reward for hard work is finally in sight

George Chen is a senior staff writer at The Stanford Daily who writes football, football and more football. Previously he worked at The Daily as the President and Editor in Chief, Executive Editor, Managing Editor of Sports, the football beat reporter and a sports desk editor. George also co-authored The Daily's recent book documenting the rise of Stanford football, "Rags to Roses." He is a senior from Painted Post, NY majoring in Biology. To contact him, please email at [email protected]