This is piece is the second in a series on ethical university investment. Please read part one here.

Last Tuesday, Stanford Students for Palestinian Equal Rights (of which I am a member) gave a presentation on the topic of ethical investment in Palestine, as well as a draft bill. Tonight, the Undergraduate Senate is likely to vote on that bill.

We target Stanford’s $17 billion endowment – the fourth largest of any American educational institution. The University allegedly maintains a commitment to ethical investment, wherein “when the Trustees determine that the corporate policies or practices of a company Stanford may invest in could cause substantial social injury they, as responsible and ethical investors, shall give independent weight to this factor in determining Investment Responsibility Policies and Proxy Voting Guidelines for corporate securities.”

Our bill calls for the Board of Trustees to use four criteria for deciding whether to invest with a particular company:

If the answer to any of these questions is “yes,” then Stanford should take its money out of the offending companies.

We have identified eight specific companies that definitively violate these criteria, and we call for divestment from: (Criteria 1) Caterpillar and Lockheed Martin; (Criteria 2) Ahava Dead Sea Laboratories and Motorola; (Criteria 3) Riwal and Cement Roadstone Holdings; and (Criteria 4) Veolia and Mekorot Water Company.

While the administration has not confirmed whether the university has investments in any of these companies, they have stated that with such a large endowment, we should expect that Stanford has investments in everything — especially when it comes to Fortune 500 companies (Lockheed, Caterpillar, Motorola).

If the university finds that the endowment is not invested in these companies, we will feel undoubtedly relieved. In fact, our bill will simply call for the Board to keep it that way.

It is standard that we do not do business with human rights violators nor do we invest heavily in regions where conflict is taking place; often times, sanctions are put in place in order to heed this legal and moral weight.

The status quo of our university endowment does no such thing.

When these multinational companies get no heat for raking in profits from discrimination against people in the Palestinian territories, the illegal demolition of their homes, a separation barriers that is taller than the Berlin Wall, or the utilization of military equipment against civilian populations, none of us is safe.

For these same multinational companies can (and do) build walls in Mexico, train police to use excessive force against civilians from Palestine to Oakland, and provide drone technology that states use to surveil and criminalize poor communities of color around the world.

To reiterate, current university actions (not divesting and maintaining the status quo) are out of line with its own policy.

It is time to hold the university accountable.

Regardless – and I emphasize regardless – of which narratives one subscribes to about the Palestinian situation, regardless of whether people don’t know much about what’s going on, don’t care, or think it’s too divisive, I ask one very simple question:

Why should we invest in companies that we know cause social harm and violate the most sacrosanct of human rights?

Until someone can answer this question, our collective action as a campus must be to divest.

Do we otherwise want the Stanford name to be associated with companies that discriminate based on religion, nationality or ethnicity?

Does it fall in line with our university’s values to illegally demolish 25,000 homes, to displace 160,000 people and leave them homeless?

Do we want to invest in corporations that operate in settlements that our own government has acknowledged are illegal and present a grave obstacle to peace in the Middle East?

Please show me where in our university’s documents it indicates that investing in any of these companies aligns with our values and goals and I’ll be quiet.

Because we know these investments are out of sync with University obligations, we have to respond.

There is no better place to do this than the ASSU Senate. The university will continue to patronize us and ignore our voices if all we are doing is writing columns and signing petitions as individuals or student groups.

While our actions are not going to make this regional conflict in the Middle East disappear, that does not absolve us from our responsibility not to be complicit from internationally documented and recognized violence, discrimination and oppression.

At the very least we must do no harm.

By removing our financial tie to these human rights violations, we can move towards making our institution accountable to our fellow global citizens.

The Senate plays a critical role in bringing ethical investment closer to fruition.

People have expressed concern that the Board won’t actually reconsider its investments, but if the trustees can’t confirm the support of the student body through the voice of the Senate, then the trustees will mostly likely not be moved to take action.

Whether we get another 1,000, 2,000, 5,000 signatories, the Senate’s influence and importance plays a crucial role in affecting university policy. The Senate vote would represent a benchmark victory and move us a lot closer to ending university complicity.

And we know victory is possible. We’ve seen it with Net Appetit and we are seeing it with Suites.

Let’s not stand by idly and let the administration mollify us; let’s speak loudly and let our actions speak even louder. 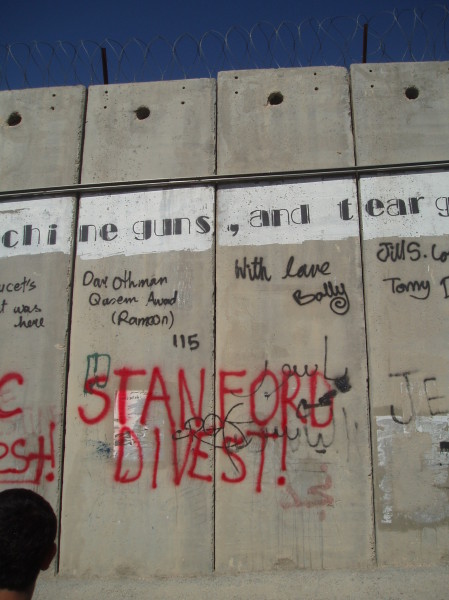 With special thanks to Michelle Dallalah on assistance with this piece.

Kristian Davis Bailey is a junior studying Comparative Studies in Race & Ethnicity. A full time journalist/writer and occasional student, he's served as an Opinion section editor, News writer and desk editor for The Daily, is a community liaison for Stanford STATIC, the campus' progressive blog and journal, and maintains his own website, 'With a K.' He's interested in how the press perpetuates systems of oppression and seeks to use journalism as a tool for dismantling such systems.