Food trucks not returning to campus in the spring

As the ASSU Executive’s winter quarter food truck pilot program comes to an end, a lack of student demand means that late-night food trucks will not return to campus in the spring. Lunch trucks, organized by food truck management company Off the Grid, will return next quarter, while Net Appetit, a popular and long-serving food truck, is unlikely to come back. 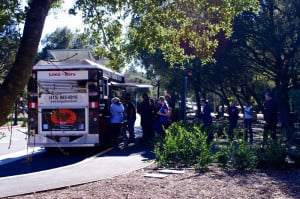 Net Appetit, owned by the nonprofit organization Aid to Children Without Parents and operated at Stanford by Chon Vo, was originally asked to leave campus in January because of a new University mobile food vendor policy, although it subsequently returned in late February. According to Vo, if he was to return to campus next quarter, he likely won’t be permitted to continue serving food in his customary spot on Santa Teresa Street.

“From my point of view, the truck will probably not be able to come back,” Vo said. “We cannot keep on fighting.”

Net Appetit was ultimately asked to leave by the Stanford University Department of Public Safety (SUDPS) on March 1 because it continued to violate the mobile food vendor policy. Vo called his current operation—an afternoon buffet served in his truck on Santa Teresa Street—“group delivery,” while the University maintains that Net Appetit is not delivering to customers individually and remains illegally parked.

“No food delivery truck is allowed to park on Santa Teresa for any time longer than it takes to deliver pre-ordered and pre-packaged food to nearby offices,” wrote Assistant Vice President for Business Development Susan Weinstein ’72 MBA ’79 in a statement. “This policy was enforced by campus police.”

Bill Larson, SUDPS spokesman, confirmed that one deputy was dispatched to Net Appetit at the request of the University.

Vo may be a veteran in the semantics of what constitutes “delivery” services. After Net Appetit served lunch at the Cisco parking lot in San Jose for 12 years, other food trucks came to the same parking lot and began to block parking spaces. At that point, Cisco asked all the trucks to leave. However, Vo won that battle on the grounds that he was a delivery service.

“We asked Cisco whether we could do delivery, and they consulted their law department, and their definition came out that, yeah, actually, they couldn’t do anything about us,” Vo said. “They agreed that our method is delivery.”

Vo called the University’s actions against Net Appetit “an attempt to discriminate,” citing an example of people picking up food from a Domino’s Pizza car in front of the Stanford Humanities Center. He argued this is the same model as Net Appetit’s group delivery system.

According to Weinstein, Net Appetit is given the same treatment that all delivery trucks receive.

“Net Appetit is permitted to deliver food to campus under exactly the same terms as other delivery trucks,” Weinstein wrote. “A pizza truck receives an order, prepares the food off campus, packages the food in a box off campus and brings the order to the individual’s or group’s office or dorm. The delivery truck stops in at campus location for only five to 10 minutes—just long enough to complete the delivery. Net Appetit is welcome to do the same.”

Even if Net Appetit operates as a delivery truck under a definition on which Vo and the University agree, the future does not look bright for Net Appetit’s presence on campus.

“If we do the delivery thing, we may not survive, because that model is cumbersome,” Vo said. “When Cisco Systems allowed us to do delivery, we lasted about eight months.”

As Net Appetit looks set to leave campus, the trial period of late-night food trucks in the Wilbur and Theta Delta Chi parking lots will also come to a close due to a lack of student demand and profitability.

“The ASSU did its best to promote evening food truck service to the campus community, but demand just wasn’t there,” Weinstein wrote. “This week, ASSU and Off the Grid decided jointly to discontinue weekend evening service.”

ASSU President Robbie Zimbroff ’12 M.A. ’13 expressed satisfaction that the option was at least available to students.

“We went through nine weeks, and they just weren’t profitable,” he said. “Will [Wagstaff ’12, ASSU Vice President] and I are fine with that. All we could do was try and make the option available to students—we’re glad we got done what we said we were going to do.”

Lunchtime Off the Grid food truck service will continue next quarter in a testament to its success to date, according to Weinstein.

“All trucks are meeting their required minimum revenue targets [for lunch], and sales for certain trucks are now far exceeding expectations,” she said.

Although some were upset with the University’s handling of the eviction of non-Off the Grid food trucks such as Net Appetit and Mia’s Catering, Weinstein said that the Stanford community has responded positively to the food trucks brought in by Off the Grid.

“I have heard from quite a few others who are enjoying the new food trucks,” Weinstein wrote. “They like the variety of having a different truck on campus each day, and they think the quality of the food is significantly improved.”

Meanwhile, operators of Off the Grid-licensed food trucks have highlighted their success to date. Sue Altamirano, operator of Sanguchon, the truck that parks on Lomita Mall every Wednesday from 11 a.m. to 2 p.m., said that her experience on campus has been absolutely positive.

“We do get a lot of people coming by every week,” Altamirano said. “It’s a good sign.”

Correction: A previous version of this article stated that Net Appetit was escorted off campus on March 1. In fact, the truck was asked to leave. The article has been corrected and The Daily regrets the error.