This is the second part in a three-part series on life in Palestine and Israel.

This week makes two years since Stanford alumnus Fadi Quran was arrested, beaten and detained in the West Bank. Video of Fadi’s treatment set off a flurry of campus and international attention, after ten Israeli soldiers claimed Fadi had assaulted them. Fadi, who graduated in 2010 with degrees in physics and international relations, had joined protests in Hebron to open Shuhada Street, a central road in the West Bank’s largest city. The Israeli military has closed the street to Palestinians since 2000 in order to ‘protect’ the couple hundred settlers occupying land in the city.

Fadi’s activism in the region is rich: he is one of six Palestinian freedom riders arrested while attempting to desegregate Israeli-only buses in the West Bank and was named “the face of the new Middle East” by Time Magazine. The trajectory of my life — as a Stanford student, as a journalist, and my development into an activist — was profoundly affected by covering Fadi’s arrest for The Stanford Daily as a news reporter. I did a 40 minute post-prison interview with Fadi which I only published on my website at the time. The remainder of my column today features excerpts from my interview with Fadi on March 2, 2012. 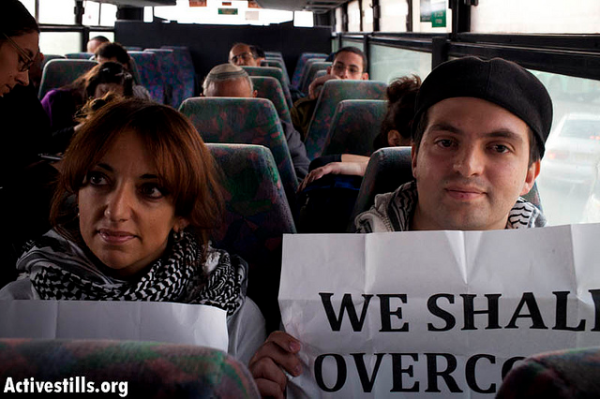 KDB: What is the current state of your legal affairs?

FQ: When I was being interrogated the interrogator was very clear with me — he told me, in essence what he said is that we know what you and the people you work with have been working on in terms of community — organizing a non-violent resistance — and that we’re keeping an eye on you and in essence we are going to try to do what we can do to shut you down. Now, it was obvious there was a video showing that nothing happened. And he said now–he took out 10 pieces of paper — and he said that 10 of the soldiers around you have stated that you have attacked them. Luckily the video proved that that’s not the case, and I guess with the international pressure and the fact that the video is on YouTube, they realized it would be very embarrassing if they kept me in prison based on those lies, so they decided to release me.

KDB: Can you give me some context about last Friday’s demonstrations in Hebron?

FQ: What the protest was about was a specific road that was the main trade and market road in Hebron, called Shuhada Street. It had most of the markets, it was just the main road — you can think about it as like University Avenue in Palo Alto, something like that. And it was closed down to Palestinians, all the stores, all the Palestinian [word unclear] shut down and Palestinians are not allowed to use that street. And those Palestinians who live on that street are only allowed a small patch on the side of the road to walk to their homes. So the march was a nonviolent march to try and simply walk on this road — to open Shuhada Street for Palestinian youth.

KDB: The spokesperson from the Israel Ministry of Foreign Affairs said the protests on Friday were unauthorized and therefore illegal. Could you talk a little bit more about that?

Yes, so you need to ask authorization. But of course, it’s like saying that the protesters in South Africa shouldn’t have protested or marched without getting authorization from the apartheid regime. It’s similar to saying that the African-Americans in the South shouldn’t have protested in Birmingham before getting authorization from the U.S. Army. It just doesn’t make sense. It’s a racist policy — it’s a dictatorial occupation — it’s an apartheid regime. And of course no type of protest or march towards freedom or justice is going to be accepted by them.

KDB: Can you give us an account of your prison experiences?

FQ: They put me in a room alone that had basically throw up and feces on the ground, and so forth. And I got there at 3 a.m. — they strip-searched me, and I then, as I was about to fall asleep — I still couldn’t see of course from the pepper spray — I could barely open my eyes.

At 5:30 a.m., after basically sitting in the room with bright lights on for an hour, an hour and a half, one of the soldiers walks in and says, basically begins to…me and asks me to clean up, to clean up the room…Eventually he was saying, ‘If you don’t clean the room, we’re going to clean the room with you.’ And I said — therefore, to avoid more trouble, I cleaned the room and the nearby bathroom with my blanket that was in the room and I had to sleep essentially cold. They kept me in that room alone without anyone with me for 24 hours in solitary confinement. And I didn’t know what time it was and the room didn’t have any windows and the bright lights stayed on — they never closed them.

KDB: Do you have any messages for the Stanford community?

FQ:  I’m very grateful to the Stanford community and to the international community for supporting me the way they did — I would have likely been in prison for much longer had they not mobilized their support so quickly. And I pray that everyone has a similar community — that everyone will have a similar community that could protect them in times of need like the Stanford community did for me. But there are hundreds of similar cases, if not more, and they deserve just as much help as I did — and even more.

KDB: What is the current state of your activism?

FQ: We’re informally organized into different groups who come together for specific event–different groups from different locations. And we work for freedom, justice and nonviolent activism, similar to the type of activism that was used by the African National Congress in South Africa and by the Civil Rights Movement in the U.S. and by Gandhi. Our movement is growing and clearly, like I noticed while I was in prison, the Israeli military and the Israeli government understand that we could be a powerful force for change — towards freedom, justice and liberty for all.

Video of Fadi speaking immediately before his arrest as a Palestinian Freedom Rider.

Kristian invites you to read the full transcript of his interview on Storify, where you can listen to the audio of Fadi speaking. Fadi will be speaking on campus Thursday at 7:15 pm in the Ujamaa House Drake Lounge. Kristian is a co-president of Stanford Students for Justice in Palestine.

Kristian Davis Bailey is a junior studying Comparative Studies in Race & Ethnicity. A full time journalist/writer and occasional student, he's served as an Opinion section editor, News writer and desk editor for The Daily, is a community liaison for Stanford STATIC, the campus' progressive blog and journal, and maintains his own website, 'With a K.' He's interested in how the press perpetuates systems of oppression and seeks to use journalism as a tool for dismantling such systems.