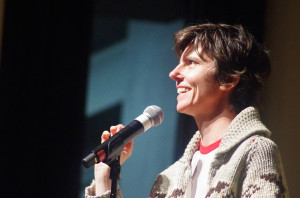 Stand-up comedian Tig Notaro performed last night in Cubberley Auditorium to a full audience. Her show featured audience interaction towards the second half and was followed by a Q&A session moderated by Dan Klein ’91, instructor of improvisation.

“The show was a huge success,” said Elizabeth Quinlan ’13, events coordinator for the Storytelling Project. “I think there were people laughing out loud every 10 seconds. It was a rare and amazing moment to have someone so well-known to be interacting with the audience.”

The event was in part sponsored by the Stanford Arts Institute, allowing free admission for all members of the audience. The show was co-hosted by Stanford Storytelling Project and Immersion in the Arts: Living in Culture (ITALIC).

ITALIC, a residential-based academic program centered on the practice, history and analysis of art, brings in guest lecturers based on a quarterly theme. This winter, ITALIC capped its quarter of speakers with Notaro to conclude its theme of “gravity and levity.”

Aaron Shkuda, assistant director of ITALIC, noted Notaro’s unique narrative style, relating it to the focus of ITALIC this quarter.

“Throughout her comedy, Tig takes a wry approach, dancing the line between serious subjects and humor,” said Shkuda. “It’s something we’ve been focusing on all quarter — at what times is levity a more effective way to create art that deal with serious issues?”

Notaro’s deadpan style first drew acclaim at her 2012 Largo show in Los Angeles, which she began by greeting, “Good evening. Hello, I have cancer.”

At the time, she had just received her diagnosis for breast cancer and was dealing with Clostridium difficile. She was also recovering from a breakup, as well as from her mother’s death.

“With humor, the equation is tragedy plus time equals comedy,” she had said at the 2012 Largo show.

“What was so remarkable about that performance was that she was in a tragedy stage — and yet she was still making comedy,” said Hilton Obenzinger, lecturer who teaches a course called “Stand-Up Comedy and the ‘Great American Joke’ since 1945” in fall quarter.

Last night, her deadpan delivery was no different, as she brought up her double mastectomy by joking about her breasts conspiring against her.

Towards the end of the event, Notaro interacted heavily with the audience, an action that Quinlan described as “a combination of excellent craft and down-to-earth openness.”

“She clearly wanted to have a dialogue with the audience, but from my perspective, people took too much liberty with it,” said Stuart Melton ’15, co-president of Stanford’s comedy club, Stand Up, D.

Melton, who also hosts and performs at open mics for Stand Up, D at CoHo, felt that the interaction may have thrown off her rhythm as comedian.

“But she handled it extremely well,” he said. “It was very interesting to see how she dealt with the crowd.”

“Tig turned it into her own performance — it was brilliant,” Obenzinger said. “And part of what was so brilliant was that a lot of it really wasn’t calculated. She clearly thrives off audience interaction.”

Near the end of her routine, Notaro was able to cajole a standing ovation.

“Every comedy show I’ve done, I’ve gotten a standing ovation,” she had said during the show.

“Someone else asking for a standing ovation would just seem arrogant,” Obenzinger said. “Tig doing it works. She has a self-deprecating manner, and she comes off as being very genuine.”

Irene Hsu is a music contributing writer, and a former Deputy Desk Editor of News at The Stanford Daily. She is a sophomore from San Jose, CA and is double-majoring in English and Symbolic Systems. Contact Irene at ihsu5595 'at' stanford.edu