Students respond to potential removal of The Free Store 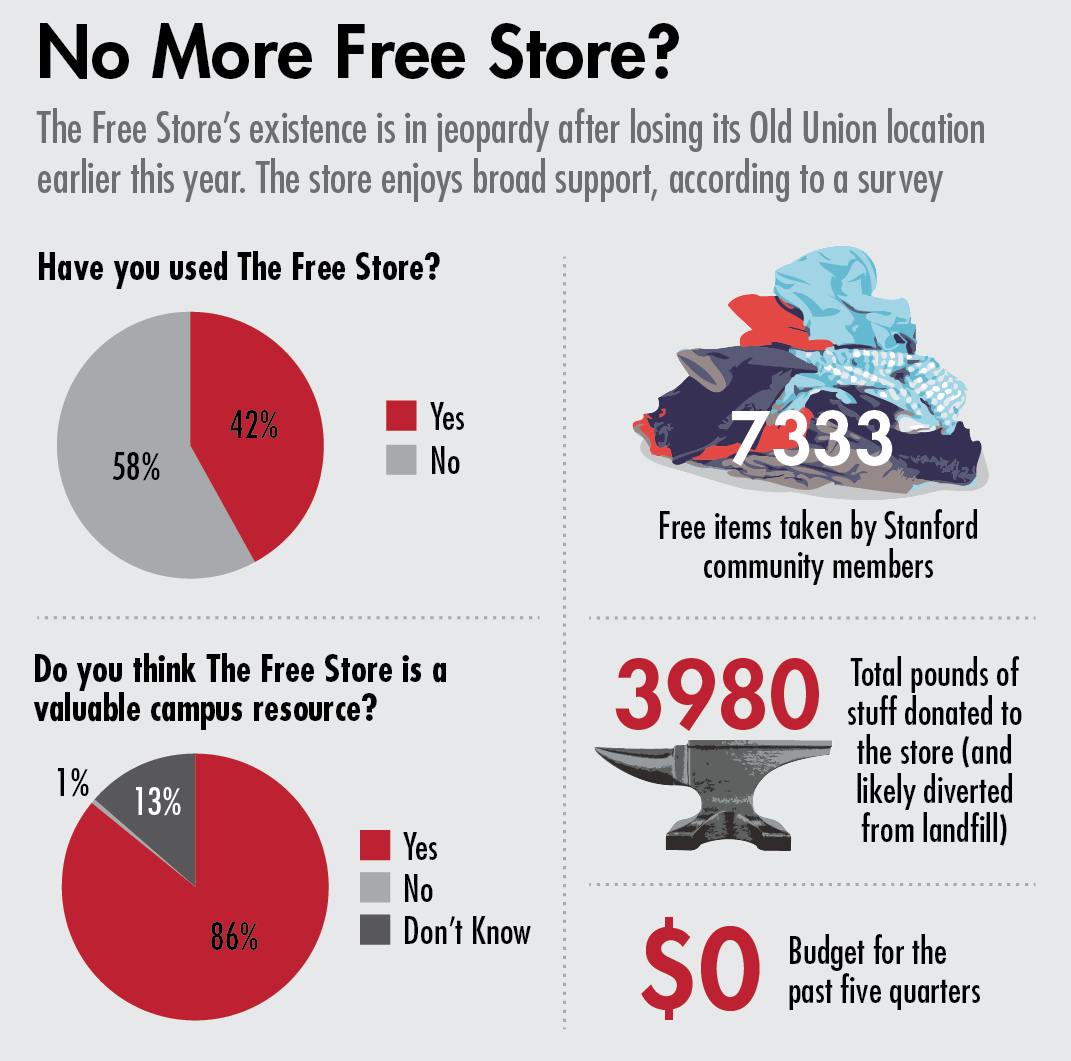 More than 1,400 students responded to a recent survey launched by The Free Store organizers, who began a campaign after hearing news that they may lose their space in the basement of Old Union.

The Stanford community expressed overwhelmingly positive views of The Free Store, many of which mentioned the store as a valuable campus resource.

“I have no idea why you wouldn’t just have a free store,” said Connor Stubbs ’18. “There is no reason against it. It’s not like they’re using the space for anything. It’s not hurting anybody. It’s not getting in the way. It’s not like anybody goes down there for any other reason.”

The survey had only been out since October 28; however, over 1,400 students have responded with interest in retaining the store’s space.

“A couple of students I’d never met before offered to forward The Free Store emails onto their lists,” said Maria Deloso ’15, co-director of The Free Store.

“The results are overwhelmingly positive: Pretty much everyone seems to think the free store is a valuable campus resource,” said Justin Briggs, fourth-year graduate student and co-director of The Free Store. “I think the survey really demonstrates that the community values the store, wants it to remain open and even wants it to be expanded.”

According to Briggs, of the 1,427 responses to date, 1,225 students believe that The Free Store is a good campus resource. Less than one percent — 10 students — believe it isn’t, while the remainder expressed being unsure.

The Free Store coordinators plan to present these statistics to the Old Union building manager to demonstrate student interest in the store, hoping that this new information will have them reconsider their decision.

As student awareness about The Free Store’s situation increases, more students are becoming vocal about keeping The Free Store in Old Union.

“The Free Store is one of the greatest resources for reducing waste on campus,” said Heather Connelly ’18. “Not only is it fun, but it builds a real sense of community among students.”

One student, John Brooks Hamby ’18, has been very vocal about his support for The Free Store and plans to use his position in Frosh Council to help bring about change.

“I hadn’t heard much about The Free Store until I was told there was an attempt to have it removed,” Hamby said. “I was surprised that there would be opposition to having a student-run, student-led and sustainable program like The Free Store. The Free Store is representative of the initiative of Stanford students and the Stanford culture. It would be a shame if it was taken away.”

Jeremy Quach is a sophomore Desk Editor for the Student Groups beat and is from Kansas City, Kansas. He can often be found smiling, stuffing his face full of french fries, and mumbling Beatles lyrics to himself. He can be contacted at jquach ‘at’ stanford.edu.