Original Winter One Acts raise questions of the absurd

This year’s three Original Winter One Acts, presented by Ram’s Head Theatrical Society, were all focused on the theme of absurdity. Here, The Daily reviews each of these new and exciting student-written works. 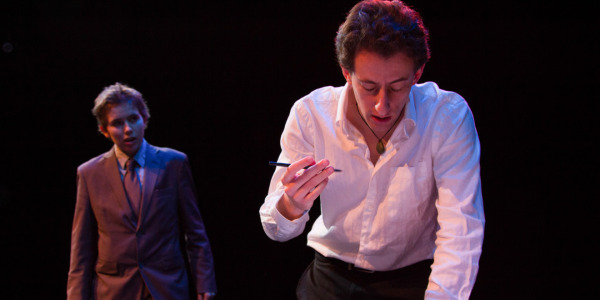 We open with “Due Dates” by Daniel Johnson, described by OWOA as “a frat boy on a leash whipped on by a sorority dominatrix.” But those aren’t even the main characters. Or are they? It’s not easy to determine the central story in this play. It seems to be more of a college story, combining physics with attraction with questions of truth and optimism. I think JJ (Nishant Karandikar) and Darrell (Jeffrey Abidor) are the main characters, but I also thought they were gay until the end. Still, Karandikar has great energy and some amusing, playful moments, and Quito Tsui’s costumes add fun to the piece and distinctiveness to the characters, especially for Bozzo (Becky Aydin) and Hapless (Brian Levin). The interruptions and entrances certainly “change the topic” (as one character implores another to do at one point during a conversation), leaving us with a piece that examines a slice of life in a series of strange classroom encounters.

Next, “The Script Selector” by Kiran Ran Magar is fascinating – and maybe also frustrating. I never took my eyes away, trying to catch any detail that could further explain the story of these men, but if you want easy answers and simple plots, this play isn’t for you. Are there two men, or more? Is it all in the head of The Man (Brandon Silberstein)? In a statement despairing about the scripts he’s selecting – but which also speaks to life itself – the Man (Is it ‘the Man’ or ‘The Man’) exclaims,“They all do something, but really nothing!” He bemoans the fact that the piece about love is too clichéd; the comedy is too cheap; and the third script is one-dimensional  masquerading as intellectual. Director Adi Chang ’18 uses the space remarkably well; though we only have one desk, we don’t miss the set at all in this piece. The simplicity is an asset. With clever lighting and clear use of every corner of the space, the ground rules for this foreign world are quickly established.

Silberstein and Ezra Jackson-Smith (Man I-V) are completely present and focused the entire time. Even if we don’t always know what’s happening, they are so assured in their knowledge of the world that we trust them. While the different characters and personas of Man I-V could have been more varied — shifts were indicated by exits and re-entering with slight costume alterations — Jackson-Smith’s presence was so clear and commanding that it wasn’t really a problem. And while “Script Selector” might have more impact if it were slightly clearer at the end, it is compelling precisely because of the questions it raises. It leaves us wanting to watch it again, searching for more hints and answers.

The final one-act, “Occam’s House” by Brandon Silberstein, is the most fast-paced and quick-witted. A “meta-theatrical murder mystery situational comedy,” this play shows 10 strangers who are summoned to a house and slowly killed off when the lights periodically go dark. As they race to solve the mystery, accusations, hilarity, and stripping ensue. But time ticks on. Michael (Steve Rathje) and Ellen (Maria Doerr) earnestly lead the investigation, with Ron (a convincing John Valentine) as an aggressive and slightly antagonistic but nonetheless innocent foil. At the final, climactic moment of seeming resolution, the play ends. The characters bow and start putting their clothes on, discussing the performance. Only one actor – Michael – cannot return to his reality as Steve, convinced that the play itself was reality. It’s a clever, amusing twist to a fun play that keeps us laughing and interested throughout.

This article has been updated to reflect students’ current identities.

Noemi Berkowitz is the Chief Theater Critic and a desk editor at The Stanford Daily. She is a junior from Lincoln, Nebraska, double majoring in theater and psychology. You may see her reciting Shakespeare, wearing tie-dye and hiking. Contact her at noemi11 'at' stanford.edu.