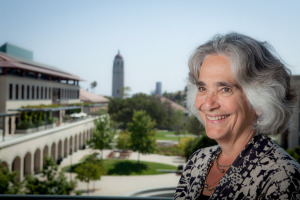 President Marc Tessier-Lavigne announced that Persis Drell, dean of the School of Engineering since 2014, has been selected to be the University’s 13th provost.

In an email to the Stanford community, Tessier-Lavigne lauded Drell as “first and foremost, a distinguished scholar,” citing her membership of both the National Academy of Sciences and the American Academy of Arts and Sciences, in addition to other fellowships and awards. She will begin her tenure as provost on Feb. 1, 2017.

Drell has been at Stanford since 2002 and served as director of SLAC National Accelerator Laboratory from 2007 to 2012. In 2014, she became the first woman to serve as dean of the School of Engineering. As dean, she worked to improve diversity in the school, citing diverse teams as “more effective teams at solving the kinds of complex problems we are tackling.”

In a statement to The Daily, Drell emphasized the necessity of a push for faculty diversity on campus.

“I sense the impatience of our students and our young faculty to move more quickly towards a more diverse faculty, and I want to capture that impatience,” she said.

Aside from her personal qualifications, Tessier-Lavigne noted the effects of Drell’s leadership during her time at the University.

“She navigated the transformation of SLAC from a particle physics laboratory to a multiprogram research center,” he wrote. “More recently, she also led the School of Engineering’s reimagining of its future through an inclusive strategic planning process.”

Richard Saller, dean of the School of Humanities of Sciences, chaired the provost search committee, which included faculty and students. The committee presented a pool of internal applicants to Tessier-Lavigne, from which the President selected Drell.

Before she starts as provost, Drell plans to meet with Stanford community members, including student leadership.

“I will be going out to meet — one-on-one if possible — as many faculty as I can, faculty in departments and schools I’m not familiar with, such as the business school and law school,” she said.

Drell holds a B.A. in mathematics and physics from Wellesley College and a Ph.D. in atomic physics from UC Berkeley. As a graduate of a liberal arts college, Drell’s commitment to educational breadth stems from her own experience.

“I cherish the liberal arts education, and I believe passionately that a broad education is something we owe students in their experiences at Stanford, and I am eager to talk to the faculty and students on how best we accomplish that,” she said.

In winter quarter, as she begins her role as provost, Drell will continue to teach Physics 41A, a companion course to introductory physics. The course is intended for students who had limited access to the discipline in high school. Drell wrote in a letter earlier this year that approximately two-thirds of her Physics 41A students are women, and half are students of color.

Courtney Douglas studies English, Political Science, and Ethics in Society at Stanford. A proud member of the Class of 2020, she served as Editor-in-Chief of The Daily's 254th volume. Her favorite poem is "To Be of Use" by Marge Piercy, she has a tattoo on her left ankle, and she wants to be a press lawyer. Her favorite journalists are Hannah Knowles and Alexa Philippou. Send her recommendations for leave-in conditioner and gravesites of relevant literary figures at ccdouglas 'at' stanford.edu.