Me, an intellectual: On “Academese” and accessibility

If there’s anything that captures the zeitgeist of modernity, it’s definitely the memes. Browsing on Tumblr, an incredibly credible source of contemporary sardonic and graphics-laden critique, two memes created in 2016 proffered a rather apt take on academia:

The first, “Me, An Intellectual,” according to the de facto meme repository of the internet, Know Your Memes, is a dialogue snowclone (aka, the linguistic term for Mad-Libs) that features the use of “needlessly formal language to correct well-known colloquial phrases.” The first documented iteration comes from Tumblr user wrecknian:

A few other choice examples include

Do these sound vaguely familiar?

Another meme, known as Increasingly Verbose Memes, or Deconstruction Memes, juxtaposes an increasingly simplified image with an increasingly complicated caption. One such example, courtesy of Know Your Memes: 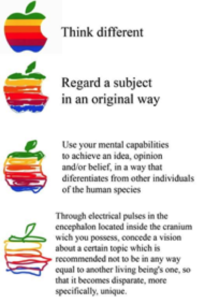 Or, to put it in numerical terms, what’s usually experienced when they don’t tell you how many sig figs to include in your answer: 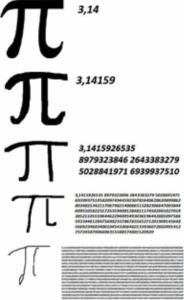 You get the point. (Or, I should say, reader of this article that I, the author, am addressing, comprehend the meaning and/or purpose of these serially presented illustrations of a certain concept).

From these two memes emerges an incontrovertibly true (because memes are an absolute source of empirical truth) observation about higher education and intellectualism. Namely, once you step inside the black box of academia, there are two consequences you might face if and/or when you decide to step back outside:

Firstly, you may or may not find yourself cursed to speak in an arcane, symbolist and/or multisyllabic language whenever you are primed to give a quasi-lecture on something meta, are engaged with some authority figure, or feel threatened and/or expressively hangry. Some things are certainly difficult to put in more concise and simpler terms; sometimes oversimplification is as much an obfuscation of meaning as a wall of text or a question that takes eight full minutes to set up in lectures and class discussion. And sometimes talking and writing in abstractions and intricate metaphors can be a means of revealing the nuances of the topic at hand. It’s the difference between saying “I require a glass of dihydrogen monoxide” versus “Like cold water to a weary soul is good news from a distant land” versus “I’m thirsty” — two of the three are slightly more telling about the speaker and the funny icebreakers they’re most fond of using on first dates and class reunions.

I admit that I tend to find myself falling into abstruse language (this article being no exception) as a kind of defense mechanism when I don’t know what I’m saying, I don’t understand it enough to say it more concisely or I’m trying my hardest to not look stupid under the heated gaze of my equally verbally and conceptually abstruse peers and professors. Either I coin fifteen new terms in a poetic monologue that some people will nod to in vague acknowledgement of the plausible-sounding sentences tumbling out of my mouth, or I start screaming. Screaming might be more effective, though I have yet to try.

This might just be a symptom of Cripplingly Low Self-Confidence, or the result of the mimetic imbibing of dense works and highly technical papers. Sometimes intellectual vitality is dictated more by how you deliver a statement than by the merits of the statement itself. But the ramifications of academese extend beyond the classroom. Academia and research gives us the ability to change our focal point — to fly higher and higher and expand the scope of our meta-bird’s-eye view, or to dig deeper and deeper into processes and mechanisms through the lens of a microscope. Unless our aim is to escape from society altogether in a bubble of scholarship for our own personal gratification, we must learn how to communicate for ourselves.

And for the privilege we have to see and learn so much, it is our responsibility to return. As in Bruce Robbin’s essay “The Sweatshop Sublime,” we must not be the critic flying in an airplane, paralyzed by the massive problem we see, unable to act other than by remarking on its existence. Study and research is useless if it doesn’t reach anyone else. Insight can only be powerful when it is shared — and shared in a way that your audience can understand. Academics speaking to other academics who are equally entrenched in academese might be completely fine in academia. But once you try to step out of that ivory tower, bearing your groundbreaking complex ideas for the world at large, you will not be able to reach anyone but those who have at least two to six letters appended to their name.

It’s possible to have both a lazy audience and a lazy speaker. Your listener and your readers, whoever they may be, should pull a little bit of weight. But they should never feel distanced, alienated or incompetent from you or your ideas because of your language.

This dovetails nicely into the second and more problematic consequence: You might feel that you can no longer talk at eye level with anyone outside of your sophisticated, highly educated, well-cultivated clique. It’s not so much that you don’t want to engage. It just that it seems as if you can no longer deign to engage.

I recently had a conversation with a friend about his idea to use “Romeo and Juliet” as a perfect example for high school students on what not to do when your parents disapprove of your choices in friends and lovers (i.e., don’t drink the poison the creepy stranger gave you, and try your best to talk it out at the dinner table with hugs and ice cream afterwards). I, being the well-versed, erudite literary scholar that I am, felt almost affronted at this literalist simplification of a classic staple in the annals of the almighty Western canon. It was like reading T.S. Elliot’s “Prufrock” as just the musings of a sad old man that needs to get laid, or Stephanie Meyer’s “Twilight” series as just a story about vampires and werewolves. (Rather, as one critic famously suggested, it’s the “story about a girl’s choice between bestiality and necrophilia”). There was far too much left unexamined, and it seemed wrong to essentialize a complex work of leeterahture (in the most “Would you like a cuppa, old chap?” sense) to a case study or just bare plot. I scoffed and suggested that “Spring Awakening” would give him more ground to cover.

Then I realized I had turned into a highbrow “intellectual” snob.

In the black box of academia, we are taught to approach everything with a critical and analytical eye (or what certain scholars call a “hermeneutics of suspicion”), ready to tear it apart and reveal its flaws and its borrowed parts, figure out how it works and devise ways to squeeze every last ounce of utility or meaning from it. Which is great and requires a lot of hard work to achieve. But the distinction between “lowbrow jejeune” appreciation and “highbrow intellectual” understanding is so sharp that I can cut diamonds and the layers of sexual tension between your RA and your roommate with it.

It’s one thing to be able to look at something (be it a work of art, social behavior or organic matter) and to be able to uncover layers of complexity that lead to novel or profound insights. And it’s another thing to act as if anyone who cannot close-read or apply critical theory cannot appreciate “literature” (which typically excludes anything not on a college syllabus, or published within the past century). And it’s a whole other unsettling thing to assume that certain people are just inherently unable to philosophize or think beyond the scope of their mundane lives.

You return home one day and realize that there are certain ideas and discoveries you cannot talk about with your family and your community, because you don’t think they will be able to understand. But is it because they cannot, or because you haven’t tried to translate, or explain why it means so much to you? There may be a seemingly insurmountable gap — but if these ideas are as universally worthwhile as they purport themselves to be, then a bridge must and can be built.

And this includes those who disagree with you.

It doesn’t do anyone good to just snicker amongst your high-minded clique of elites out of earshot when a professor, peer, or some other public or private entity says something objectionable or “ignorant” — call them out with your voice and not just your finger. Or better yet, call them in: Utilize whatever dialect engages them the most and meet them halfway, even if they don’t take the first step. Condemnatory rhetoric, or a barrage of jargon labelling their actions as prime examples of insidious, systemic ideological apparatuses only alienates. As we know, to the point of cliché, dialogue and understanding, when possible, is typically more self-sustaining than the tyrannical silence or reactionary retaliation. Certain voices are amplified so loudly that we get not just an echo chamber, but a megaphone inside that echo chamber that participates in that crime of interpellation it simultaneously condemns and appropriates for its own arsenal. This is not to say that “dialogue” should become apolitical and passive, or rising movements should Shut Up and be trampled on. That’s impossible and irresponsible. There will be inevitable disagreements and ulterior agendas — but perhaps that just means that a different narrative or argument needs to be presented. Perhaps we need more of a collective awakening than a bonfire of caricatures.

It’s true that you can’t fight every battle (I’m sorry, “engage in every conversation”) without getting burnt out at some point. And it’s true that, again, all parties in a conversation have to both listen and do own research. But no one should feel out of depth or be afraid to engage lest they be attacked, laughed at or marked a lost cause. Historically, contemporaneously, theoretically, intuitively — we know how that goes. I don’t need to pull out Hegel (Old Dead White Guy with Horrendously Abstruse Writing extraordinaire) to explain. But I did anyway — and that’s telling.

Talking about something complex in a way that others can understand is difficult. But scientists and humanists and researchers and creators and thinkers all need to learn how to step out of the black box and effectively share the gift of their discoveries. It is our responsibility and obligation to try.

We listen to what we can understand. And if you want to be heard at all, you have to be accessible.