An email sent to members of Stanford College Republicans (SCR) announcing the group’s Admit Weekend event implied that students of color are not the “target” of its recruitment process. 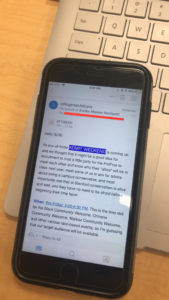 “I’m guessing our target audience will be available,” Nordquist wrote.

Following the original publication of this article, Nordquist wrote in a letter to the editor that The Daily “willfully misread an email intended for a small audience” and that she “was not in any way trying to dissuade students of color from joining College Republicans or even implying that the club doesn’t already have any.”

“I hope that I’ve rectified this misunderstanding and sincerely apologize if my words taken out of context caused anyone any consternation,” she wrote.

SCR President John David Rice-Cameron ’20 said that community center events attendees are not SCR’s “target audience” — not on the basis of their identities but rather because of political inclination.

“The email did not in any way suggest that students of color are not our targets for recruitment,” he wrote in a statement to The Daily. “It simply implied that these events organized at ‘community centers’ are designed to appeal to leftists, which recent history shows is a safe assumption.”

The event was also advertised on Facebook and in dorms. Though these other advertisements of the event did not discuss race-based targeting of prospective frosh, the Facebook event did promise a “politically incorrect” space.

Third-term Senator and Stanford Democrats President Gabe Rosen ’19 took issue with the notion that a group would choose not to engage community center affiliates.

“I find it very problematic, to put it mildly, for representatives of any campus organization to imply that their outreach only applies to students who don’t engage with community centers,” he wrote in a statement to The Daily. “Community centers are vital spaces for the facilitation of dialogue and inter-community bonds across campus; it is disappointing to see a potential desire to disengage with them.”

“I would venture to guess that SCR is one of the most racially diverse clubs on campus, and hence, the accusation that we target white students is laughable,” he wrote, responding to an earlier headline for this article.

In the email, Nordquist said that the group intends to facilitate a space “for the ProFros to meet each other and know who their ‘allies’ will be in class next year … and most importantly see that Stanford conservatism is alive and well.”

Until fairly recently, the Stanford Conservative Society (SCS) was the predominant campus organization for right-wing students.

At that time, SCR “mostly kept its involvement to rather quiet, internal campaign stuff … Nobody really knew about it, and it wasn’t much of a presence on campus,” Philip Eykamp ’20, SCR’s secretary, told The Daily earlier this year.

However, critics viewed SCS as too focused on social events at the expense of political advocacy.

That perceived deficit, combined with the 2016 election of President Donald Trump, motivated SCR members to become “bolder and more active in promoting conservative ideas and having an impact on the landscape of campus politics,” according to Rice-Cameron.

SCR wasn’t on the radar of many students until it invited self-proclaimed Islamophobe Robert Spencer to speak on campus. The talk sparked disagreement over inclusivity and free speech on campus as well as the use of student funds to support speakers whose views may alienate some communities on campus. The majority of the audience ultimately walked out of the speech.

Members of SCR have estimated that the group’s current membership is between 60 and 70 students.

The Daily does not yet have access to the entire email or any accompanying email chains.

The headline of this article has also been updated and the context of Rice Cameron’s remarks clarified to indicate that he referenced The Daily’s original headline.

Courtney Douglas studies English, Political Science, and Ethics in Society at Stanford. A proud member of the Class of 2020, she served as Editor-in-Chief of The Daily's 254th volume. Her favorite poem is "To Be of Use" by Marge Piercy, she has a tattoo on her left ankle, and she wants to be a press lawyer. Her favorite journalists are Hannah Knowles and Alexa Philippou. Send her recommendations for leave-in conditioner and gravesites of relevant literary figures at ccdouglas 'at' stanford.edu.