Members of Stanford College Republicans (SCR) are actively deleting the tickets of some students who signed up to attend a forthcoming talk titled “Make Stanford Great Again” with controversial conservative activists Charlie Kirk and Candace Owens on May 29, both students and SCR leadership confirmed.

SCR President John Rice-Cameron ’20 said that tickets have been deleted, but added that the student group only removed those ordered with a fake name, by someone who ordered more than one ticket, or by Stanford students who placed orders in the “general public” category. 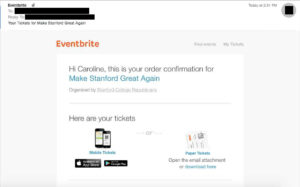 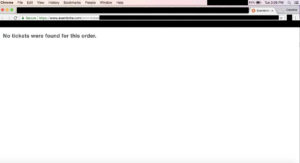 At least five students have had their tickets deleted, The Daily confirmed, with Eventbrite — the service through which tickets for the free event are being distributed — displaying a “No tickets were found for this order” message even after the students received a confirmation email of their order.

According to Associate Dean and Director of Student Activities and Leadership (SAL) Nanci Howe, SAL has heard from several students regarding this issue and is currently “in the process of determining what happened and how the University should best respond.”

She added that the event has been approved as a public event open to both Stanford and non-Stanford affiliates.

A student, who requested anonymity, claims they observed Rice-Cameron using EventBrite to delete ordered tickets during a class they were both attending.

The student added that they thought Rice-Cameron was selectively deleting tickets based on the Facebook accounts of prospective attendees. They saw him “toggling between Facebook and EventBrite,” leading them to believe Rice-Cameron “was looking at names or profiles [on Facebook] and checking ticket orders, and deciding what to do about ticket orders.”

But Rice-Cameron said the deletions were only in response to “people [who] have been spamming the Eventbrite with ticket orders under false names and spam accounts.”

“Yes, we have been removing those requests from the list to make room for people who genuinely wish to hear the speakers,” he said, but added that multiple people made requests for 10 tickets at once under their names, or requested tickets in the “general public” category though they were Stanford students. According to Rice-Cameron, all such ticket orders were deleted.

When asked about whether Facebook accounts were being used to vet attendees, Rice-Cameron said that “SCR is using any and all methods to determine whether or not people signing up have a serious intention to actually attend the event.”

“I didn’t take any actions to delete my tickets,” said Caroline Cao Zha ’20, one of the students whose ticket has been deleted. She added that only about 30 to 40 minutes elapsed between the confirmation email (at 2:31 p.m.) and the “no tickets found” message (at 3:06 p.m.); the student who said they observed the ticket deletions stated it took place at about 2:40 p.m. and after.

Others have had this problem repeatedly.

Gabi Guerra ’19 told The Daily that she did attempt to order 10 tickets, which were for a student group she is in that was “planning to go protest.”

“I don’t think they have a right to delete large ticket orders simply for being large,” she said.

She added that she did “not receive any notification about [her] tickets being deleted” and that a friend of hers “has bought tickets more than once and keeps having them get deleted.”

Other students whose tickets were deleted also ordered multiple, ranging from two to 10.

This news follows yesterday’s announcement that the College Republicans will host Owens and Kirk — who are the executive director and communications director, respectively, of right-wing nonprofit Turning Point USA (TPUSA) —  at an end-of-the-year “Make Stanford Great Again” event.

The Eventbrite and Facebook pages announcing the event described it as SCR’s “year-end grand finale.” After quoting several right-wing sound bites, ranging  from “deport criminal immigrants” to “there are only two genders” to “taxation is theft,” the description said that Kirk and Owens will encourage listeners to “break free from the farcical assumptions and victimhood mentalities propagated by the political Left.”

TPUSA aims to “educate students about the importance of fiscal responsibility, free markets and limited government,” according to its website.

ASSU senate appropriations chair Gabe Rosen ’19 told The Daily that “as far as [he is] aware, SCR is not using any ASSU-appropriated funds to pay for” the Kirk and Owens event.

In their coverage of the ticket deletions, student publication The Stanford Sphere said that “a policy of targeted deletion as such is in violation of Stanford Student and Activity Leadership (SAL) policy,” citing regulations that call for “open and easy access” to activities held by student organizations.

This report will be updated pending response from University administrators.

This report has been updated to reflect allegations that SCR acted in violation of SAL policy, as well as official comment from the SAL Office.

Brian Contreras was the Daily's Investigations Editor during the '19-'20 school year. Before that, he was a Managing Editor of the news section. A graduate of Stanford's class of 2020, he studied Science, Technology, and Society with a minor in Anthropology. Brian hails from Washington, DC and is pursuing a career in tech journalism. Contact him at briancontreras42 'at' gmail.com.