Ferguson resigned from his leadership role in the Cardinal Conversations program on April 16, after Provost Persis Drell became aware of the email chain.

“I very much regret the publication of these emails. I also regret having written them,” Ferguson wrote in a statement to The Daily.

Drell said that Ferguson “offered to resign,” and that she accepted the resignation.

“The emails … were contrary to the spirit and intent of Cardinal Conversations,” Drell said.

Ferguson himself is well-known for his conservative views. He made headlines in March for organizing a conference of 30 white male historians.

The Ocon emails are not the first time that Ferguson has made a statement he later withdrew.

In 2013, for instance, he stated that acclaimed economist John Maynard Keynes did not care to consider future generations when discussing current affairs because he was gay. Ferguson later apologized for the statement.

He has also been criticized for his outspoken support of colonialism and the British empire.

Ocon — the subject of the emails —  may be remembered for his recent ASSU executive campaign alongside Khaled Aounallah ’19, which became particularly dramatic thanks to a facetious last-minute “endorsement” from The Stanford Review that claimed Ocon had links to the conservative Turning Point USA Foundation (TPUSA).

Rice-Cameron is known on campus for his role in organizing for that same group, TPUSA, as well as his role as president of Stanford College Republicans (SCR). Minshull, meanwhile, was recently in the news for his involvement with a recent “coup-attempt” of the Stanford Conservative Society, as written about by the Fountain Hopper.

The emails use harsh and at times war-like language to describe liberals and “social justice warriors” (SJWs).

“Slowly, we will continue to crush the Left’s will to resist, as they will crack under pressure,” Rice-Cameron wrote. 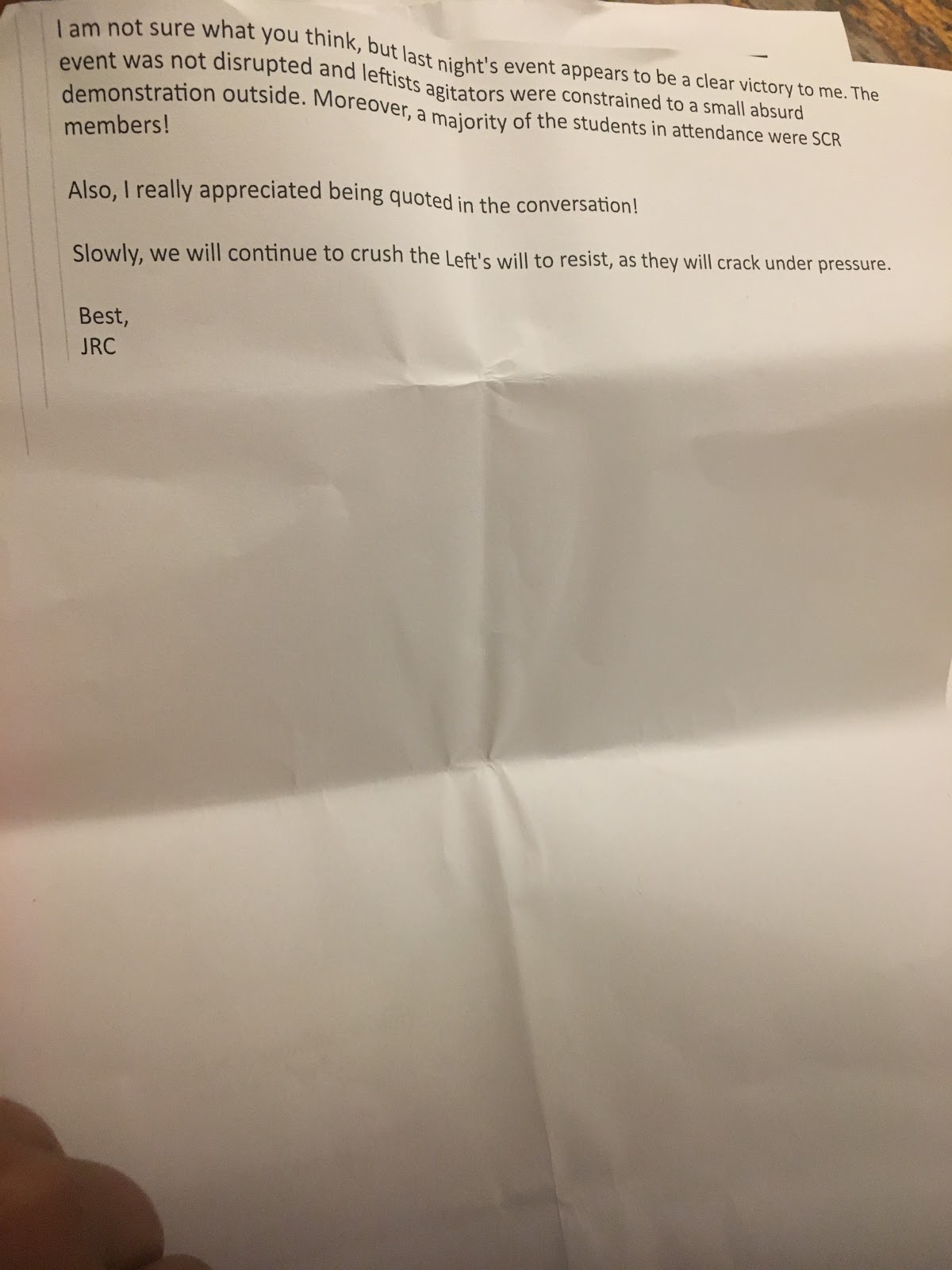 “[The original Cardinal Conversations steering committee] should all be allies against O. Whatever your past differences, bury them. Unite against the SJWs. [Christos] Makridis [a fellow at Vox Clara, a Christian student publication] is especially good and will intimidate them,” Ferguson wrote. 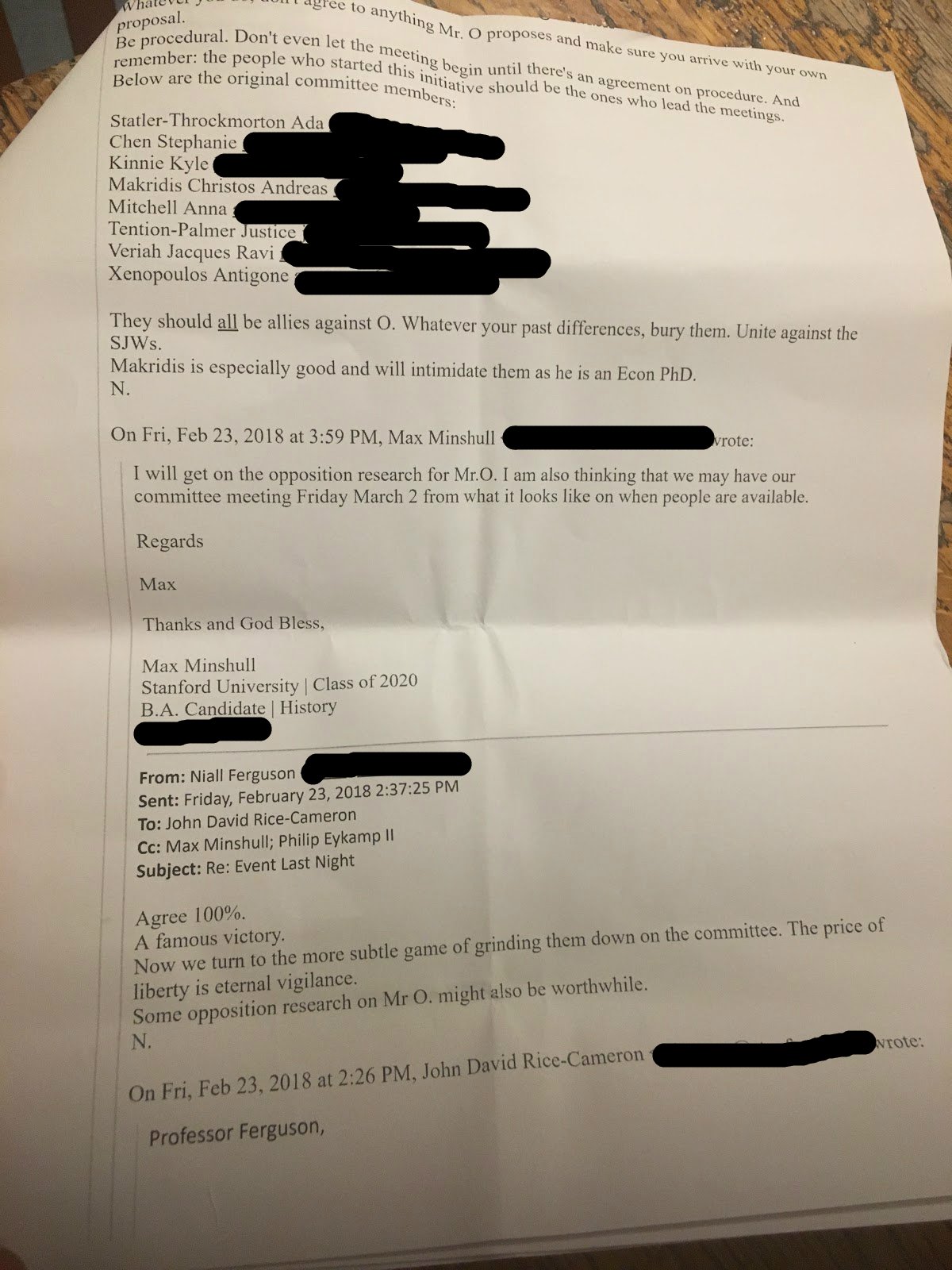 “Now we turn to the more subtle game of grinding them down on the committee. The price of liberty is eternal vigilance,” Ferguson wrote.

The previous messages were interspersed with greater discussion of the Cardinal Conversations committee and planning process, as well as a discussion appearing to be about student government.

In the email chain, Ferguson wrote, “Some opposition research on Mr. O might also be worthwhile,” referring to Ocon.

Minshull wrote in response that he would “get on the opposition research for Mr. O.” 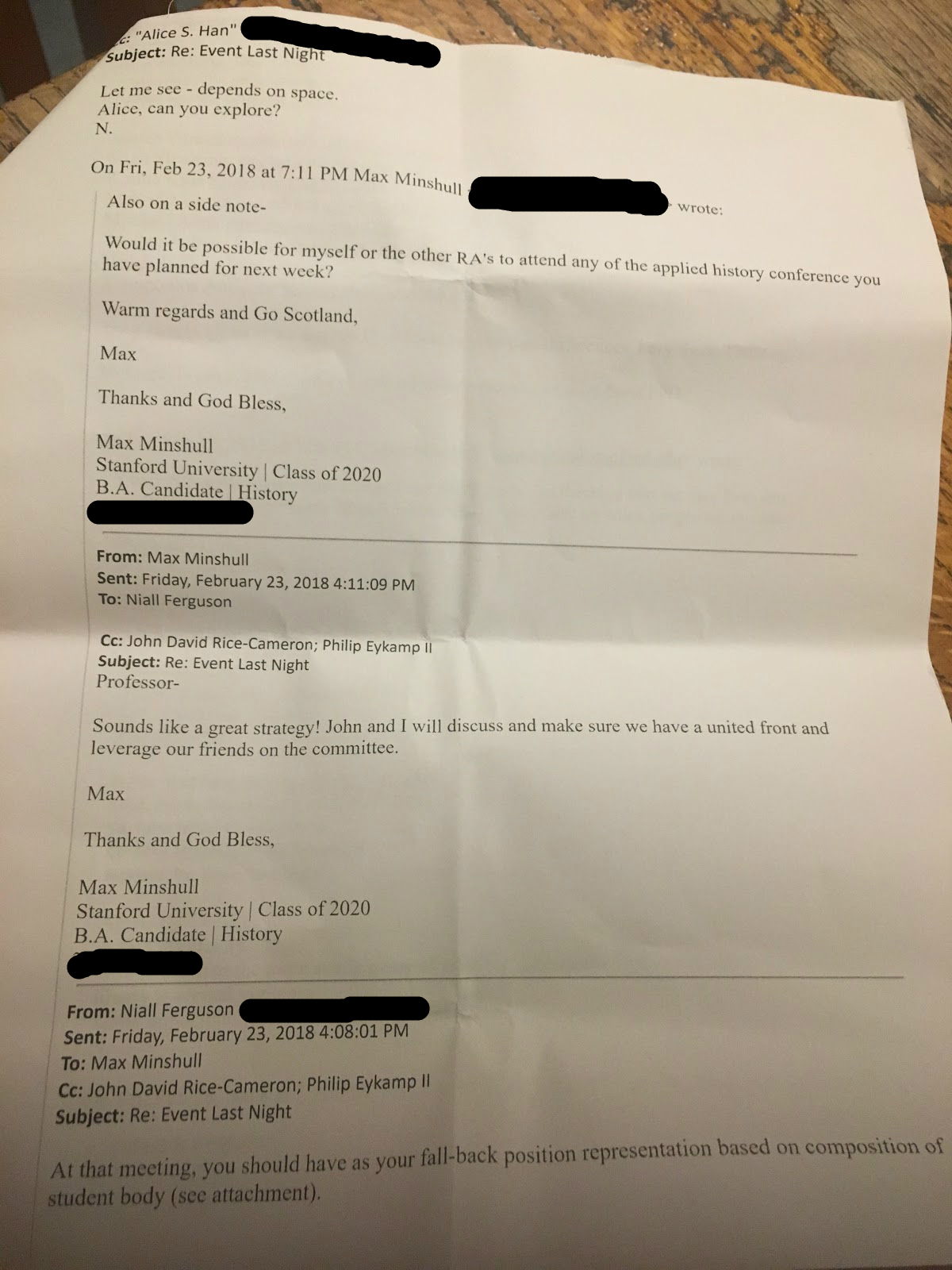 Minshull is presently Ferguson’s research assistant at Hoover, according to Minshull’s LinkedIn profile.

“When these emails were written, I was worried that Cardinal Conversations would cease to be an organization commited [sic] to inviting speakers of diverse viewpoints; we believed that activists were trying to restrict conservative voices from being heard,” Minshull told The Daily. “That said, I harbor no personal animus against Michael Ocon and apologize that my emails crossed a line.”

The Hoover Institution has in the past provided monetary support to SCR, which Rice-Cameron is president of. When contacted about whether that money had been in the service of the recent SCR event featuring leadership from TPUSA, Ferguson did not respond.

The Cardinal Conversations program itself, meanwhile, has sparked its fair share of controversy. Its invitation of social scientist Charles Murray — who has advanced spurious claims about the relationship between race and IQ — prompted “Take Back The Mic” counter-programming by student activists.

Ferguson said that he was “deeply concerned” by the campus anticipation of, and response to, Charles Murray’s visit on Feb. 22, just days before the email chain occurred.

“It seemed to me that the Cardinal Conversations student steering committee was in danger of being taken over by elements that were fundamentally hostile to free speech,” he wrote to The Daily. “It was, however, rash of me to seek to involve the Stanford Republicans, and reckless to use such inflammatory language.”

Cardinal Conversations’ student steering committee, also referenced in the emails, has drawn criticism. A February op-ed published in The Daily and co-authored by eight student groups said that the details of how the committee was formed is not publicly known. The piece also criticized the makeup of the committee.

“Cardinal Conversations’ Steering Committee, which claims to represent student voices, does not reflect the broad range of political beliefs and identities on campus,” the letter read. “The leadership of Cardinal Conversations as a whole leans toward the right of the political spectrum, thus the speakers the initiative invites neither represent both sides of the story nor raise the voices of communities that have been historically silenced.”

Ferguson actually appears to have made reference to the emails in his April 22 column in The Times, writing of a panic attack triggered by “a few intemperate emails, inadvertently forwarded to unintended recipients.”

Editors’ Note: Ada Statler was listed in the email as a steering committee member based on her former role as Editor-in-Chief of The Daily. However, she declined membership after being invited to participate via email and never attended a Cardinal Conversations meeting.

Correction: An earlier version of the article mistakenly stated that Ferguson was writing about “opposition research” in response to Minshull’s Feb. 23 email, when Minshull was in fact responding to Ferguson.

Brian Contreras was the Daily's Investigations Editor during the '19-'20 school year. Before that, he was a Managing Editor of the news section. A graduate of Stanford's class of 2020, he studied Science, Technology, and Society with a minor in Anthropology. Brian hails from Washington, DC and is pursuing a career in tech journalism. Contact him at briancontreras42 'at' gmail.com.Courtney Douglas studies English, Political Science, and Ethics in Society at Stanford. A proud member of the Class of 2020, she served as Editor-in-Chief of The Daily's 254th volume. Her favorite poem is "To Be of Use" by Marge Piercy, she has a tattoo on her left ankle, and she wants to be a press lawyer. Her favorite journalists are Hannah Knowles and Alexa Philippou. Send her recommendations for leave-in conditioner and gravesites of relevant literary figures at ccdouglas 'at' stanford.edu.Ada Statler '18 is an earth systems major hailing from Kansas City (on the Kansas side, not Missouri). She's most passionate about environmental journalism, but cares about all things campus-related.