We're recruiting! All students are welcome, regardless of experience and time commitment. Click to learn more and sign up now!

We are Leanna Sun and Karen Mai, and the article below is the second of a three-part series on resources for joining the movement for racial justice from home. Read part one here.

In the last couple of months, we have taken the time to reflect on our privileges and how to support the Black Lives Matter movement. Coming from Asian families, we’ve realized that the idea of POC supporting each other in the fight against racism is ideal and expected — however, it is not currently the case, due to a history of white oppressors pitting minority groups against each other (for example, the purpose behind the phrase “model minority” that is commonly attributed to the Asian community).

As Asian Americans, we don’t face the same brutality that the Black community faces daily, but we have to try and educate ourselves to be allies. We have attended webinars, donated, educated and marched in protests to support the movement. Through discussions with our friends and our personal experiences, we have compiled several social media accounts, organizations and tips — if you’re looking to replicate our experience!

Organizations to donate to

We recognize that donating isn’t something everyone can do, depending on financial or personal circumstances. As high schoolers, we definitely lack the financial independence to donate to organizations that we support — and in our case, organizations that our parents may not agree with. Instead of spending that $5 to get a drink, consider putting that toward a cause. Any financial contribution, small or big, will help. When we consider donating, we research how the organization is going to use the money, and also the integrity of its mission and its creators. There may be some organizations you would like to contribute to more because you have been impacted by something that they are addressing. We have also found other ways to donate, such as through our siblings.

Below is a partial list, if you’d like to donate to support detained protestors, community-led organizations or other places as well.

Black Visions Collective is a QT & Black-led organizing committee, working toward Black liberation. They arrange powerful campaigns for transformative justice. To volunteer for this organization, you must be a Black person located in the Twin Cities metro area in Minnesota. The reason we chose BLVC is because they have a powerful message in how healing justice is about people claiming love for their bodies and being able to find resources. They want to transform a long vicious history and make sure that “ALL Black lives not only matter, but are able to thrive.” Their mission is to find power for Black people so that the public can see transformative long-term change.

Minnesota Freedom Fund helps to cover bail protesters that are fighting for this movement. If you have the means, you can donate directly or take the time to explore their website and find other ways to support the work that they do. They have also provided a COVID-19 Call to Action campaign that gives a template of what to send to officials if you want to demand change.

Reclaim the Block is a police divestment organization in Minneapolis. 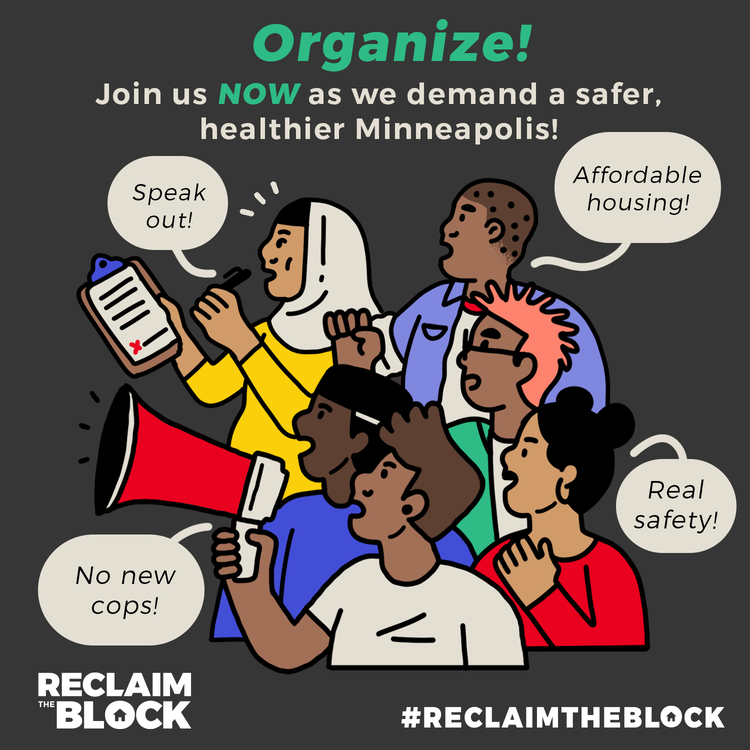 The image above is a flyer made by Reclaim the Block. The people in the picture are what they stand for — justice. This poster is intended to get more people involved with their organization. Check out their hashtag! Reclaim the Block curated a list of organizations that are in need of funding for the movement. If your organization needs fundraising help, email [email protected], and they can put it on their list.

The reason we decided to focus on these three organizations is because they are in more rural areas — we thought that may not have as much media coverage. In Boston, Los Angeles, New York City, Orlando or Seattle, there are so many organizations that are supported by the urban population. When the message spreads, everyone starts to pull funding. And though we are not from Minnesota, we hope that through this article, they can get some more donations from people all around the world.

Many users are matching their friends’ donations and circulating Venmo bingo games to increase group donations. We’ve used these resources to get our friends and families involved and donating. Social media has been especially conducive to a domino effect — change occurs when everyone puts in their support. Though during these difficult times finances understandably may not allow this sort of contribution, there are always non-monetary ways to make an impact, and despite not having funds of their own, many have been able to funnel funds from others into the organizations they wish to support.