A decade of Stanford football, visualized 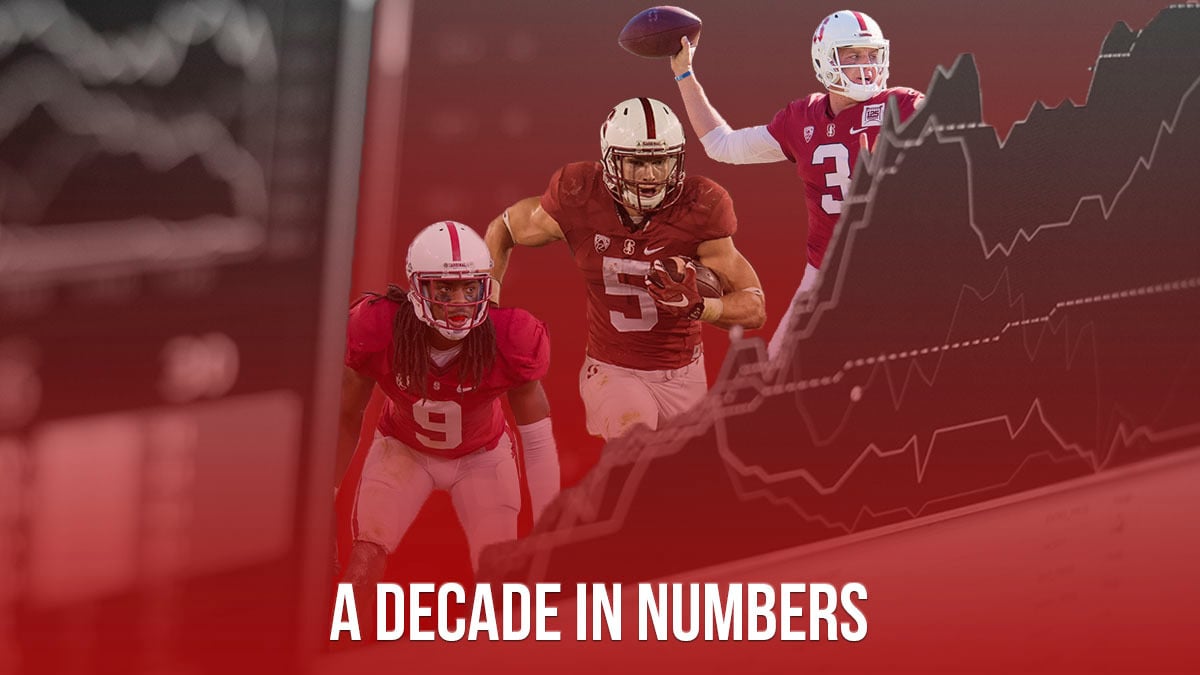 Stanford Football enters the 2020 season coming off the most successful decade in the program’s history — a run that has totaled five New Year’s Six bowl appearances with three victories, four division titles with three Pac-12 Championships and nine Big Game victories. But it’s also been a decade of ups and downs between Rose Bowl runs, rebuilding years and, most recently, an injury-battered 4-8 collapse.

Before the Cardinal kicks off its 2020 football season, we took a look at the numbers behind the last decade of Stanford football. We begin with recruiting, where we highlight the frequency with which the Cardinal has been able to secure top classes in the conference, as well as top-25 classes nationally. We then compare the Cardinal’s performance with their preseason rankings nationally and within the conference to see how often the team overperformed or underperformed expectations.

Finally, we will look at notable trends on the offensive and defensive sides of the ball. In particular, the defense steadily increased between 2009 and 2014, reaching its pinnacle in 2014 and has somewhat declined since then — at least in terms of trends in all of the major statistical categories. The offense, on the other hand, showed somewhat different trends: while the run game used to be the Cardinal’s strength, it has begun to decline recently. The passing game has picked up the slack, however, as Stanford has rostered several top quarterbacks in recent years.

Building a successful team starts with the players. Despite the academic constraints Stanford faces in recruiting, the staff has managed to consistently put together top-25 recruiting classes over this period. Within the conference, Stanford often finds itself in the top three and rarely falls into the bottom half.

The Cardinal have both recruited and developed many future NFL standouts during this era. Quarterback Andrew Luck ’12 led the team to a combined 22-3 record in the final two years of his time on the Farm and owns a 57-37 career record in the NFL. Tight end Zach Ertz ’13 has been selected to three Pro Bowls and won a Super Bowl with the Philadelphia Eagles in his eight-year NFL career. And who could forget running back Christian McCaffrey, the highest-paid running back in the NFL, who set the single-season NCAA all-purpose yard record in 2015, surpassing the record by over 600 yards. In his three years with the Carolina Panthers, he has already been named an All-Pro twice.

Stanford has been a staple in the Associated Press Top-25 poll for most of the past decade. For the majority of the decade, the Cardinal consistently overperformed expectations both nationally and in conference with higher final rankings than preseason rankings, but recent years have witnessed a reversal of that trend. Within the Pac-12 North, Stanford has declined from a long run as a consistent top-two competitor to the very bottom of the conference in 2019.

Tough performances against the run and on third down have helped the Cardinal consistently field one of the better defenses in the Pac-12 conference and the nation for the better part of the past 10 years. Overall, 2014 was the best year statistically for the Cardinal, both in the last decade and in school history. The Cardinal ranked high nationally in nearly every major statistical category between 2012 and 2014, led by players like defensive end Trent Murphy ’14 and linebackers Henry Anderson ’15 and Blake Martinez ’14. But it hasn’t lasted all decade — the 2019 season was one of the worst defensive seasons in recent memory, in which the team ranked in the bottom half nationally in most major statistical categories.

Between the 2009 and 2010 seasons, the Cardinal improved dramatically in both yards and points allowed per game, thanks partly to the efforts of standout cornerback Richard Sherman ’10. Sherman started his Stanford career at wide receiver but switched to cornerback for his final two seasons and helped lead the resurgence of the Cardinal’s pass defense. Stanford was able to maintain a stout scoring defense until a decline that began in 2017. Despite the efforts of All-American cornerback Paulson Adebo ’21, the Cardinal ended the decade with a season in which they surrendered over 430 yards per game.

The Cardinal’s run defense has generally been very effective over the first half of the last decade, with the best stretch coming between 2011 and 2014, when they ranked no lower than sixth nationally in each of those years. Despite allowing nearly 170 rushing yards per game in 2017, the team still ranked very close to the top half of all FBS teams, coming in at number 66. The ability to stop the run was also one of the few things that went right, offensively or defensively, for the Cardinal in 2019, as they allowed a hair over 150 rush YPG and ranked 52nd nationally.

While teams have had a tough time running the ball against the Cardinal, they’ve enjoyed more success passing. Excluding 2014, in which the Cardinal allowed 188 passing yards per game and ranked 12th in pass YPG, they’ve never ranked higher than 41 over the last decade and more consistently finished in the middle of the pack. In 2019, Stanford was torched by opposing offenses that averaged close to 280 pass YPG, which ranked 117th out of 130 FBS teams.

Two categories in which Stanford’s defense has distinguished itself are performance on third down and producing sacks — fitting for a team that coined the slogan ‘Party in the Backfield.’  Between 2010 and 2016, the Cardinal owned one of the best third-down defenses in the nation. The ability to hold teams to low conversion percentages on third down is one of the more accurate indicators of team success, and Stanford did not rank lower than 40 (while ranking as high as 7 in 2011) out of 130 teams in that six year span. For three seasons between 2011 and 2013, Stanford’s opponents only converted around 30% of their third down opportunities.

Between 2010 and 2014, the Cardinal also had one of the nation’s best pass rushes in terms of sacks per game and sack percentage (the percentage of plays in which the opposing quarterback is sacked), thanks in large part to standout players like Shayne Skov ’14 and Blake Martinez ’14 and, more recently, Solomon Thomas ’18 and Bobby Okereke ’18. Both Stanford’s sacks per game and defensive performance on third down declined correspondingly towards the latter half of the decade.

Stanford has enjoyed an effective offense for most of the decade buoyed by numerous star players — some of the best-known Cardinal in history on the offensive side of the ball wore a Stanford uniform between 2009 and 2019. Andrew Luck started his first game for the Cardinal in 2009, and his three years on the Farm as a starter coincided with the best Stanford quarterback play in recent memory. Stepfan Taylor ’13 set the school career rushing yardage record between 2009-2012, and Ty Montgomery ’15 turned in an All-American season in 2013. NCAA record holder and Heisman Trophy runner-up Christian McCaffrey continued the Stanford tradition of winning with top running backs, and Bryce Love ’19 had his own Heisman Trophy runner-up season in 2017.

Stanford’s “Intellectual Brutality” model of football, in which they direct a physical run-first offense that relies on powerful running backs and a stout offensive line, has seen offensive trends like the strength of the running game stay steady over the last decade. The Cardinal’s run game has been remarkably successful for eight of the last 10 years: in six of the last 10 seasons, the team has averaged over 200 rushing yards per game and ranked in the top 35 out of the 130 Division I Football Bowl Subdivision (FBS) schools.

The other huge passing year for Stanford coincided with Bryce Love’s final season in 2018, when he dealt with injuries all fall. That led to a plummeting decline in the Cardinal’s running game, although K.J. Costello ’19 turned in one of the finest seasons by a quarterback in Stanford history to pick up the slack.

2019, finally, was not kind to Costello or the run game, as Cameron Scarlett ’19 only rushed for 840 yards behind an injury-battered offensive line.

With the exception of 2017 and 2018, the Cardinal have ranked as high as one and no lower than 29 among FBS teams in average time of possession over the last decade. High TOP rankings usually indicate a team runs the ball more often than it passes, as incomplete passes always stop the clock and pass-heavy drives typically take shorter amounts of time than run-heavy drives. Interestingly, the year that the Cardinal ranked number one in average TOP (2010) was Luck’s first year as a starter — that year, he threw for over 3,300 yards and 32 touchdowns, was named Pac-12 Offensive Player of the Year and finished as Heisman Trophy runner-up.

How often does Stanford run the ball? Stanford’s run-pass balance has fluctuated over seasons headlined by star running backs and quarterbacks — but not always in the way one might expect. The seasons in which the Cardinal ran the ball the least came after the McCaffrey era and the years in which Costello started at quarterback in every game in which he was healthy: 2018 and 2019. Surprisingly, the Cardinal ran the ball only 55% of the time in 2017, the year in which Love ran for over 2,000 yards, won the Doak Walker Award for the nation’s best running back and finished as the runner-up in Heisman Trophy voting. However, as expected, the year in the last decade in which the Cardinal ran the ball nearly 65% of the time was 2015, McCaffrey’s last season on the Farm. Taylor’s career at Stanford partially overlapped with Luck’s years on the Farm, but the Cardinal still ran the ball on over half of their plays between 2009 and 2012. Despite playing with one of the best Cardinal quarterbacks ever, Taylor still holds the school record for career rushing yards with 4,300.

A new decade of Stanford football begins Saturday. Fittingly, the Cardinal will travel to Eugene, Oregon to face the Ducks in a matchup between the two most dominant teams in the conference from the last decade. However, coming off of their first losing season since 2008, the Cardinal and the Ducks are in significantly different places this season: The Ducks look like the Pac-12’s best hope for a spot in the College Football Playoff, while the Cardinal have something to prove — can they reclaim their spot atop the elite teams in the nation?

Sofia Scekic '22 is a former managing editor for the sports section. She is from Wisconsin and is studying Public Policy. An avid Green Bay Packers fan, she has watched nearly every game for the past nine years. Contact her at sscekic 'at' stanforddaily.com.Jibriel Taha is a senior staff writer for the sports section. He is from Los Angeles and studies economics. Contact him at jtaha ‘at’ stanforddaily.com.