Football Offense Preview: Sky’s the limit for Mills and company 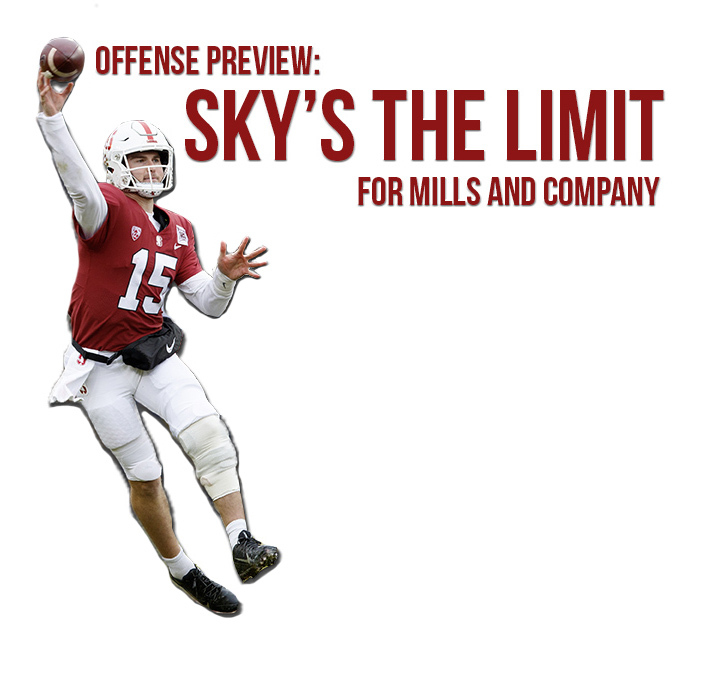 It is safe to say that the 2019 college football season did not go according to plan for the Stanford Cardinal and head coach David Shaw ’95. Injuries and a lack of experienced depth played a large role in that, a fact that has many Stanford fans hoping last season’s 4-8 record was just a minor disturbance from the usual standard.

A few things will be different about this year’s offense. Quarterback K.J. Costello ’20 has moved on to Mississippi State, running back Cameron Scarlett graduated, tight end Colby Parkinson now plays for the Seattle Seahawks and former All-Pac-12 first team left tackle Walker Little has opted out of the 2020 season in order to prepare for the 2021 NFL Draft. Despite these losses, there are plenty of reasons for optimism about this year’s squad.

Senior quarterback Davis Mills, who threw for 1,960 yards and 11 touchdowns in eight games last season, now has the keys to the offense after filling in periodically last season for Costello. The top-ranked quarterback recruit in a 2017 class that included Tua Tagovailoa and Jake Fromm, Mills has the pedigree to air it out and also has the mobility to tuck the ball and run for a few yards, giving Andrew Luck Director of Offense Tavita Pritchard ’09 more play call options. There’s more uncertainty in the quarterback room beyond Mills, though: backing him up is junior Jack West, who was unconvincing in a blowout loss against UCLA last year. Highly touted freshman Tanner McKee is also waiting in the wings, while fifth-year Isaiah Sanders could feature as a gadget player after transferring as a dual-threat passer from the Air Force Academy’s run-heavy offense.

Stanford’s quarterbacks will have quite a few weapons to whom they can spread the ball. The Cardinal’s wide receiver corps returns all of its starters and has the potential to be one of the best groups in the Pac-12. Senior wide receiver Connor Wedington, who reeled in 51 receptions for 506 yards and one touchdown last season, along with junior Michael Wilson, who had 56 catches for 672 yards and five TDs, headline the position. Junior Simi Fehoko will look to build on a breakout sophomore season which saw him average 23.58 yards per catch, a school record. Also in the mix will be senior Osiris St. Brown, junior Brycen Tremayne, freshman John Humphreys and sophomore Elijah Higgins. Fehoko identified Higgins as a potential breakout candidate for the season.

“Elijah Higgins, this man is a beast. He didn’t really play too much last year, but 240 [pounds] running a 4.4 [40-yard dash time] is a freak out there,” Fehoko said. “He might take some of the tight end’s reps, and we might end up going empty and having him just spread out with five receivers out there. So I think he’s going to be a sleeper…people are about to know who he is.” 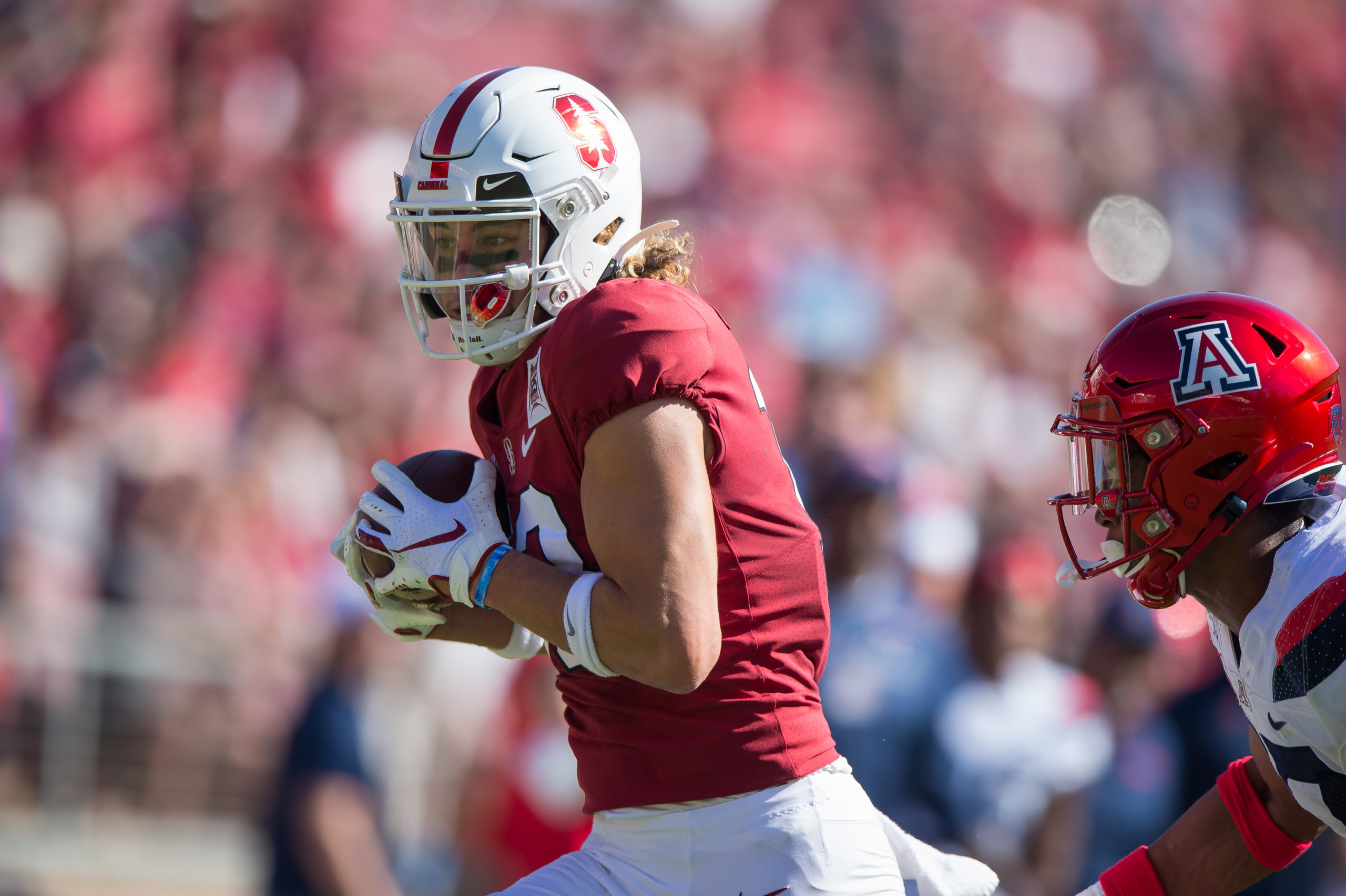 Wide receiver Simi Fehoko had his coming-out party last season, finishing with 24 catches for 566 yards and six touchdowns. He also set a school record for averaging 23.58 yards per catch, breaking Devon Cajuste ’16’s mark of 22.93 yards per catch set in 2013 and establishing himself as the big play threat of the Cardinal receiving corps. This season, look for him to be a more featured piece of the Cardinal offense and play his way into the Pac-12 All-Conference team picture. Fehoko is expecting even more from himself in his junior season.

“I think having that time spent with [Davis Mills], those couple games that he did end up playing, it really built that chemistry and really helped us start off on a good foot this year,” Fehoko said. “Something that I wanted to improve on was, last year I started a little slow, it took me three or four games to finally start really playing. This year I feel like I need to start fast starting game one, Oregon.”

The task of replacing Cameron Scarlett’s production in the backfield should fall to sophomore duo Austin Jones and Nathaniel Peat. Jones had the more extensive playing time and promise of the two last season, rushing 45 times for 227 yards and one touchdown, and he was named to Athlon’s Preseason All-Pac-12 Third Team. Also competing for time will be fifth year Dorian Maddox, junior Justus Woods and freshman E.J. Smith — son of the NFL’s all-time leading rusher Emmitt Smith. Accompanying the running backs in the backfield will be senior fullback Houston Heimuli, who has played in 24 career games, even recording a receiving touchdown in 2018.

The hallmark of every Stanford offense is always the offensive line, and after fielding four true freshmen in 2019’s injury-battered campaign, this season’s unit will return with much more experience. Senior center Drew Dalman, a Phil Steele Preseason All-Pac-12 First Team member, will anchor the unit. Senior Foster Sarell, a former five-star recruit, will play at right tackle with sophomore Walter Rouse protecting Mills’s blindside at left tackle. Finally, sophomores Barrett Miller and Branson Bragg should fill out the rest of the line at left guard and right guard respectively. Sophomore guard Jake Hornibrook is also pushing for playing time after starting six games last season, while freshman tackle Myles Hinton, the highest rated member of the Cardinal’s 2020 recruiting class according to 247sports.com, is highly regarded by players and coaches alike. The biggest questions for the offensive line this year will be whether they can avoid injuries and get back to the dominance we are used to seeing from a David Shaw-led unit. The players themselves are expecting big things. 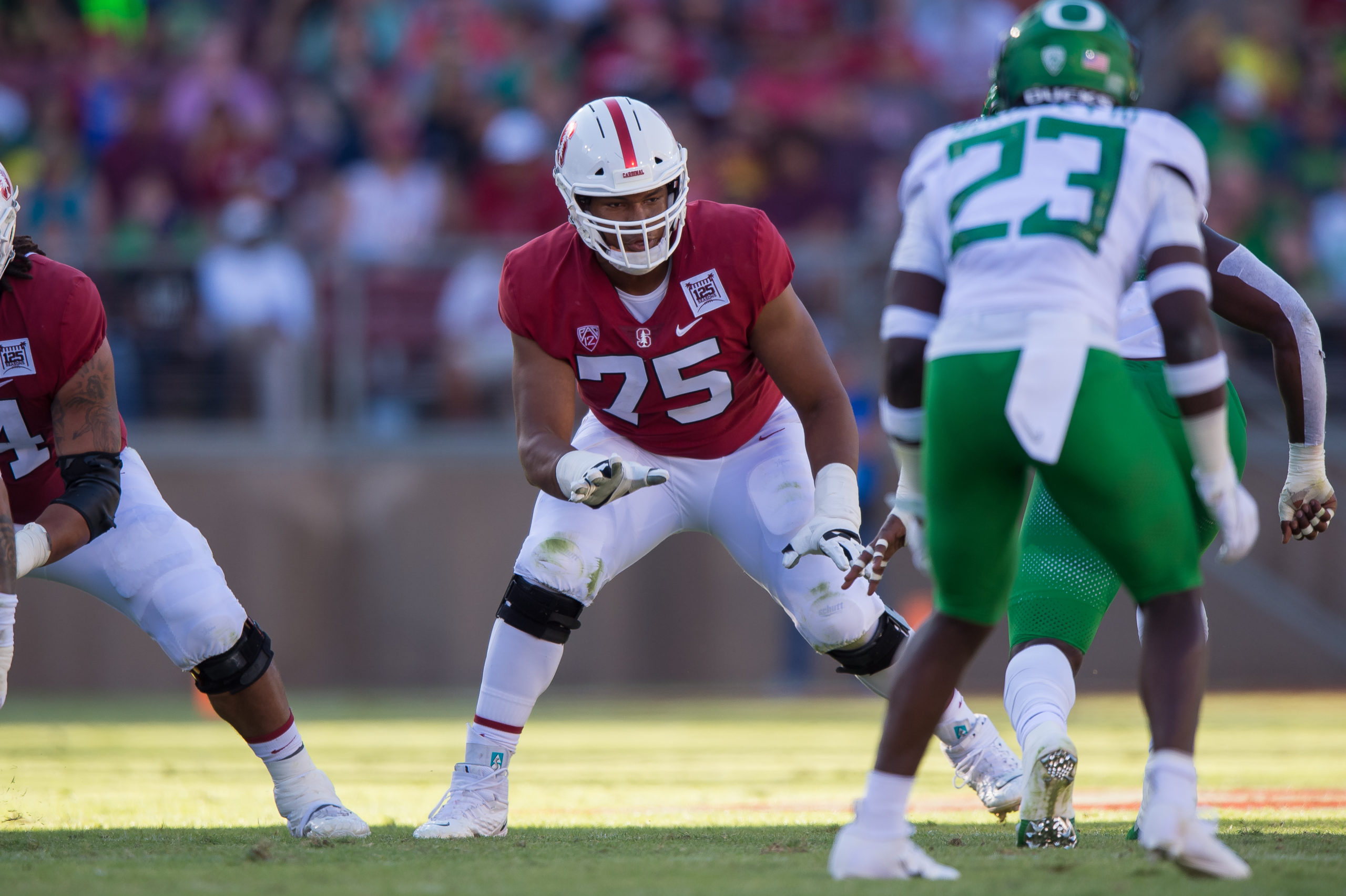 Last season, offensive tackle Walter Rouse saw extensive playing time at left tackle as a true freshman in place of the injured Walker Little, who is expected to be one of the first few offensive linemen to have their name called in the upcoming NFL Draft. Rouse was just the second Stanford freshman to start at left tackle since 2000 and was named to The Athletic’s Freshman All-American Second Team. Now a sophomore, he is ready to take the next step and become a leader on the offensive line.

“This year, I have a better understanding of the playbook,” Rouse said. “To me, there’s no excuses for any mess-ups. I got all those out of the way that first year. You can have those freshmen mistakes, but you can’t have that anymore.”

“I consider myself a little bit more of a leader now, an older guy even though I’m a sophomore,” he continued. “So I want to try to take that next step into a leadership role and to not make those mistakes and be a leader in the line room and on the practice field.”

The tight ends are also usually another staple of a David Shaw team. The experienced duo of senior Tucker Fisk and fifth year Scooter Harrington should receive the bulk of the playing time at the position this season. Both are known more for their blocking than their pass-catching, though, so sophomore Bradley Archer and freshmen Lukas Ungar and Benjamin Yurosek may get the chance to show what they can do.

With such a deep receiving corps and a former five-star recruit under center, this will not be the Cardinal offense of old where star running backs Toby Gerhart ’10, Christian McCaffrey and Bryce Love ’19 ran rampant through opposing defenses. Stanford’s attack will likely be a pass-heavy one, relying on the arm of Mills. Mills showed last season that he was up to the task, and now that this offense is his from day one, expect to see a ton of points through the air this year. The running game will also need to improve from last season in order to balance the play calling and keep defenses on their tails, but Coach Shaw is not worried about a lack of production from this stable of backs.

“We’ve got a group of veterans who are hungry, and I say that probably our offensive line [is] as well. We just didn’t perform up to our standard [last year]. That can never leave the back of our minds that we have a high standard around here for effective offensive play, in particular running the football,” Shaw said. “They’re working extremely hard. They’re going to have an opportunity as a unit to impact every football game, so I’m excited about where those guys are. We’re going to keep raising the bar there.”

The team will kick off its shortened, seven-game schedule at Autzen Stadium against defending conference champion Oregon, a favorite to win the Pac-12 North Division again this year. If Mills and his receiving corps can get on the same page from game one, the sky’s the limit for this offense and they just might surprise some people this season.

Ells Boone is the managing editor for the sports section. He is a junior from Virginia Beach, Virginia, studying communication. When not chasing after rebounds in Maples Pavilion or recording a podcast with Jibriel Taha, you can find him at TAP or watching his favorite Premier League team, Tottenham Hotspur, play. Contact him at eboone24 'at' stanforddaily.com.