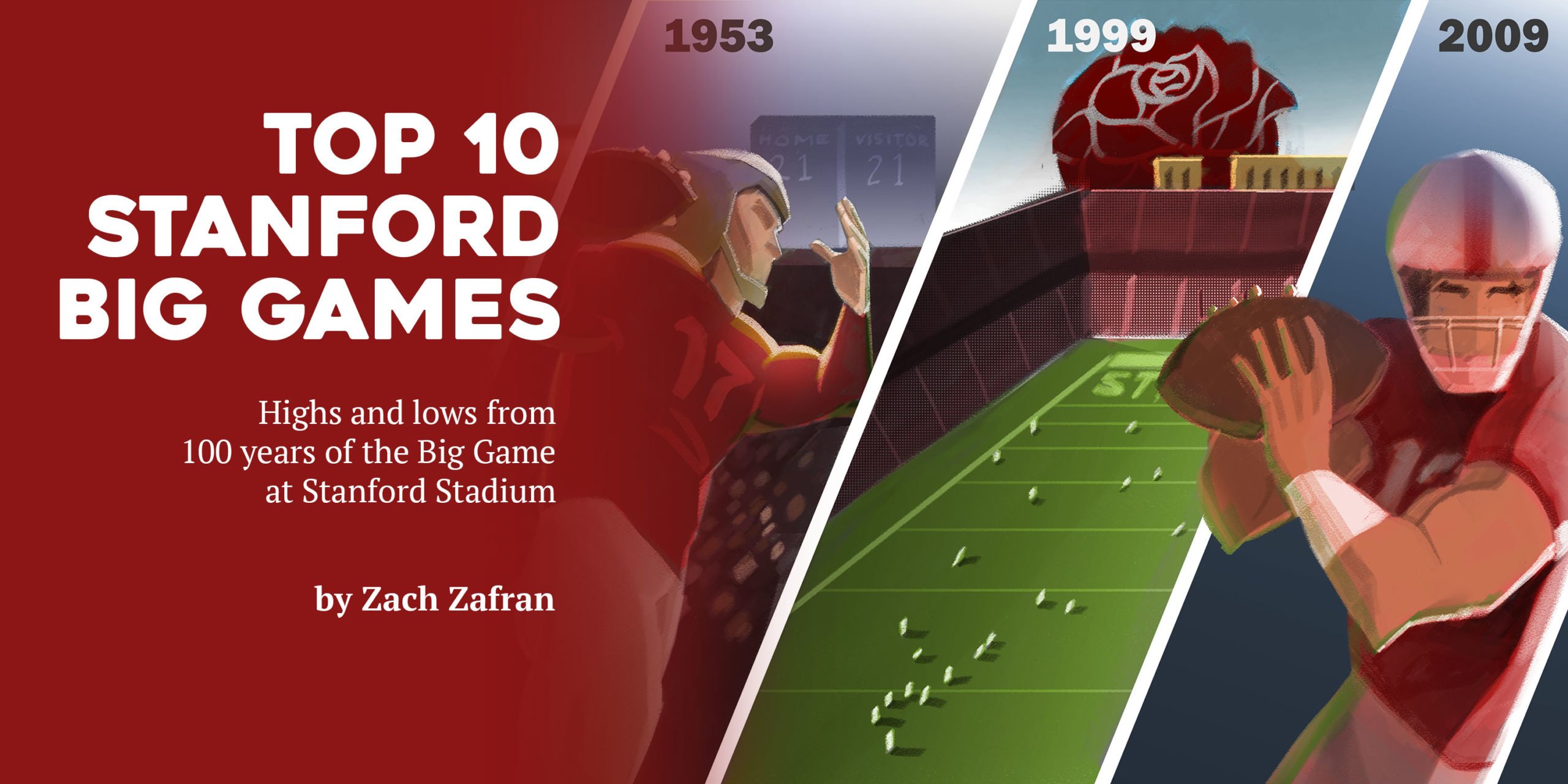 This year, Stanford Stadium celebrates its centennial. Throughout the 100-year history of the venue, a number of events in the stadium have made their mark on the history books.

As the long-standing home of Stanford football, football has obviously been integral to the identity of the stadium. But its significance to the sport does not stop with the Cardinal. Stanford Stadium hosted Super Bowl XIX in 1985 when the hometown San Francisco 49ers defeated the Miami Dolphins, 38-16. In addition to football, it’s held many important soccer matches, ranging from the 1984 Summer Olympics events to the 1994 FIFA World Cup.

Beyond athletics, the stadium has served as the home for various high-profile events. In 1928, Herbert Hoover gave his acceptance speech for the Republican presidential nomination on the same soil where the U.S. and Soviet national teams held a track meet 34 years later in 1962.

However, of the numerous things that have occurred at the site, none have been more important than the inaugural event: the Big Game.

Here’s a look back at some of the best games between the cross-bay rivals that have taken place in Stanford Stadium.

This low-scoring bout was the first game in which the Axe was introduced. Both sides decided that the Axe was the perfect trophy for such an event, and it certainly has held true. Since its conception, the Axe has had a rich history of its own. Following this 1933 matchup, the winner of each Big Game would be awarded the trophy for the year and have the score of the game engraved on the trophy’s plaque, with Stanford coming out on top first.

The 50th Big Game was not supposed to be a very exciting game. No. 9 Cal entered the game with an impressive 8-1 record, and Stanford was winless. Surprisingly, the Cardinal held a lead with under three minutes to go in the game, but an 8-yard touchdown pass put the Golden Bears up, ending Stanford’s bid at a historic upset.

Another game that marks a milestone, this matchup was the first time the Big Game would be played under the lights. Traditionally, the Stanford-Cal matchup took place with a 1 p.m. kickoff; however, the 92nd Big Game had a scheduled start at 3:30 p.m., which was the latest in the history of the event at that point. With portable lights set up around the stadium and a sellout crowd, the Cardinal walked away with a victory.

In front of a complete sellout crowd of over 90,000 spectators, Stanford entered the day with a lot on the line. A win would not only secure the Axe for the first time since 1946, but it would also grant Stanford a berth to the Rose Bowl. However, a five-interception performance from Stanford quarterback Bob Garrett ‘54 coupled with a pair of late scores from the Bears resulted in a tie. The tie and a UCLA win over USC gave UCLA a spot in the Rose Bowl over Stanford.

One year removed from the 1974 Big Game — where Stanford won at Memorial Stadium with a field goal as time expired — No. 13 Cal came to Stanford Stadium with a vengeance. This game set a new record for points scored by a single team in the Big Game, as the Bears reached 48 points. It’s no surprise it was done in a year in which Cal had the country’s top-ranked offense, backed by five All-Americans. Both teams entered the game on hot streaks, as Stanford was riding a five-game win streak, and the Bears had won seven of their previous eight, but Cal prevailed largely due to running back Chuck Muncie’s five-touchdown performance.

This was the year No. 2 Cal dominated all of college football, and Stanford was no exception. Anchored by a dominant defense that only gave up 33 points the entire year, Berkeley shut out Stanford on their own turf, securing a victory before winning the Rose Bowl and ultimately capping off their undefeated victory with a national championship, which is their most recent to date.

No. 10 Stanford put on a performance for the ages, setting the record for the largest margin of victory in a Big Game. This victory, coupled with an upset loss for the Oregon Ducks, enabled Stanford to clinch the Pac-12 North for the third straight year and placed the Cardinal in the Pac-12 Championship, where they ultimately defeated the Arizona State Sun Devils 38-14.

A dominant defensive performance from No. 18 Stanford enabled the team to avenge its loss against the Bears from the previous year and gave the Cardinal their ninth Big Game victory in 11 years. This Big Game gave Stanford the Pac-8 title, and it sent them on their way to the Rose Bowl for the second year in a row, where they upset No. 4 Michigan 13-12.

It was the Christian McCaffery ’18 show at Stanford Stadium this night, as the running back led the No. 11 Cardinal to a victory thanks to a school-record 389 all-purpose yards performance. Stanford clinched a spot in the Pac-12 championship game with the win. This Big Game set the stage for a memorable rest of the season where the Cardinal went on to upset No. 4 Notre Dame 38-36, win the Pac-12 Championship against No. 24 USC 41-22 and earn a Rose Bowl victory against No. 5 Iowa 45-16.

Coming off of a season in which they finished 3-8, Stanford entered the game with lots to prove. Their 18-point victory, highlighted by the longest run in Big Game history, a 94-yard touchdown run from fullback Casey Moore ‘02, gave them their first undisputed Pac-10 title and sent them to the Rose Bowl for the first time since 1972.

This top-20 matchup between No. 3 Stanford and No. 19 Cal did not disappoint. In front of a crowd of 90,000 fans, undefeated Stanford was looking to help their case for a national championship berth. However, the 13-point favorites failed to secure a victory, and the Bears took home the Axe, ruining Stanford’s season along the way.

In the most recent Big Game to take place in Stanford Stadium, the meeting went down to the wire. Evidently, 2019’s matchup was about flipping the script, as the Bears earned their first Big Game victory since 2009. With only a little over two minutes left in the game, then-freshman punter Ryan Sanborn, who was forced into kicking duties mid-season, knocked down a 44-yard field goal to give Stanford a three-point lead. However, with only 1:04, Cal stormed right down the field and scored the game-winning touchdown on a 16-yard run from quarterback Chase Garbers. On the ensuing drive, a stop by the Bears on fourth-and-1 sealed the victory and gave Berkeley students all the reason to rush the field. Beyond the game itself, Cal became bowl-eligible following the win, while Stanford’s loss would ultimately keep them from postseason contention, ending a 10-year streak of bowl appearances.

In another top-25 matchup, the No. 25 Bears clawed back early from a 14-0 deficit to take this one, handing No. 17 Stanford their only home loss that season. Despite including one of college football’s top players as quarterback, Andrew Luck ‘12, this game was a battle in the trenches. Cal’s Shane Vereen had 42 (yas, 42!) carries for 193 yards and three touchdowns, while Stanford’s Toby Gerhart ‘11 took his 20 carries for 136 yards and four touchdowns. After taking the Cardinal all the way to the Bears’ 13-yard line with just under two minutes to spare, Luck was intercepted, and Cal would go on to take The Axe away from Stanford — as well as the Cardinal’s hope for a Rose Bowl appearance. To top it all off, Cal students rushed the field, making Stanford Stadium their own for the night.

Zach Zafran is a staff writer in the sports section. He is a freshman from the Bay Area, who is planning on majoring in an engineering discipline. Zach is on an unnecessary amount of intramural teams and can likely be found around campus wearing swim trunks casually. Contact him at sports 'at' stanforddaily.com