18 and 0: Tanner McKee and Isaiah Sanders’ unlikely bond in the Stanford QB room 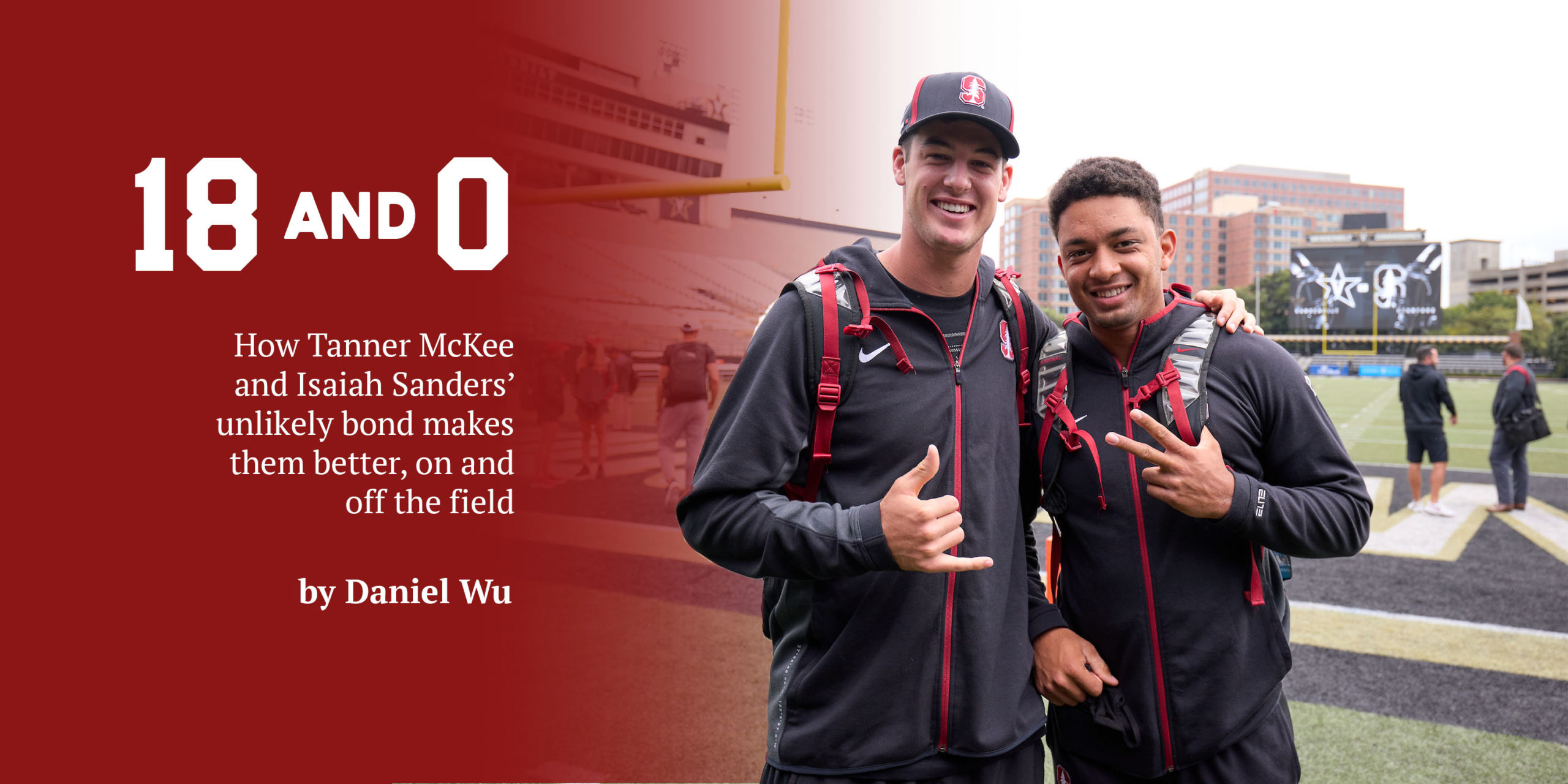 Tanner McKee has thrown the game-winning pass to topple No. 3 Oregon in overtime. He’s played and won in the roar of the Coliseum.

But if you really want to get him going, ask him who wins when he plays Isaiah Sanders in ping pong.

“See, I could see him saying that he beats me,” McKee said, “but that is definitely a lie.”

“He’s probably told you that he’s better, and he is,” Sanders said. But he’s quick to add that it’s gotten closer and that he’d never give McKee that much credit to his face.

“If I was talking to him, it’d be a different story, but if I’ve gotta be on record…” Sanders said before trailing off, laughing.

Friendly competition and trash talk is nothing new to the Stanford quarterback room, but McKee and Sanders might be the most unlikely friendship to come out of it. The sophomore and sixth-year came to the Farm from worlds apart — in every sense of the word. McKee came to Stanford after a two-year LDS mission in Brazil, and Sanders from Colorado, where he graduated a second lieutenant from the Air Force Academy.

Because of their paths, this season has meant very different things to the two quarterbacks. For McKee, it’s his first year starting at his dream school. For Sanders, it’s a last chance to play the sport he loves before embarking on his next chapter. But their differences have made for a tight-knit friendship that has helped both quarterbacks grow both on and off the field.

“I could say a lot about Tanner,” Sanders said. “He’s one of my closest friends on the team, for sure — honestly, just closest friend in general.”

That wasn’t always the case. The two quarterbacks arrived at Stanford in the same year, 2020, as the COVID-19 pandemic disrupted the team’s usual onboarding at fall camp. McKee was a freshman with his whole college career ahead of him. Sanders was a wildcard — a quarterback from the Air Force Academy and only the second graduate transfer Stanford had ever taken into the football program.

Sanders remembers not being sure how much they’d have in common.

“I was like, ‘Oh, he’s an incoming freshman. I’m kind of on my fifth or sixth year,’” Sanders said. “There was just a bigger age gap, so I wasn’t sure if we would relate on that much.”

McKee grew up in Corona, Calif. in a family of athletes. His dad Jeremie played quarterback in high school and Tanner, tall and lanky as a kid, had the build to take up the mantle. In the offseason, he put that height to use elsewhere, lettering in basketball and volleyball.

Sanders found his way to football too, but his life was ultimately shaped by the military. He was born on base at the Air Force Academy hospital in Colorado Springs — the academy is on his birth certificate and his diploma, he jokes — and both his father and grandfather were in the military.

At first, Sanders didn’t think he’d join them. He wanted to play football.

One of the schools that did offer Sanders a spot at quarterback was the Air Force Academy. He accepted and enrolled in 2016, knowing that he was signing up for a very different football career than the one he’d imagined as a kid. Growing up, he played Madden and ate brownies after practice. Football had led him to a rigorous service academy, where they put him through 36 days of basic training and measured how his bed was made by the inch. It forced Sanders to change how he approached the Academy and his passions.

“I can’t pinpoint a specific time when it shifted,” Sanders said. “But I definitely know that like… transitioning into that culture, you have to wrestle with that question and say, ‘Hey, why am I here?'”

Sanders said he found the answer in his family and his identity. He’d grown up watching his parents serve others — his dad Joe in the military and then as a nonprofit CEO, and his mom Lourde as the leader of a Bible study group for the Hispanic community in Colorado — and decided he wanted to use the opportunities of the Academy to eventually give back as well. After graduating from the Air Force Academy in Systems Engineering and falling just short, in the final round, to win a Rhodes Scholarship, he was accepted to Stanford for graduate school.

McKee’s football career, meanwhile, took a detour of a different kind. By high school he was the No. 4 quarterback in his class with offers from top colleges across the country. When McKee committed to Stanford and graduated from high school in 2018, he looked set to continue on the path to stardom.

Then he dropped football entirely and got on a flight to Brazil to serve as a missionary.

For the next two years, McKee traded his helmet and pads for the suit and tie of the Church of Latter-Day Saints. He lived away from his parents for the first time, and instead of the structured life of a high school athlete, he spent hectic afternoons rushing from street to street, helping anyone he met. One encounter stands out: getting to know a 13-year-old boy living with his grandmother who needed a friend.

“His grandma was always busy, always leaving,” McKee recalled. “And so… it was really neat to kind of be a part of his life.”

All the work came at the cost of football. McKee only had half an hour to work out in the mornings and inevitably lost muscle. But he didn’t have any qualms.

McKee’s faith had gotten him through high school, when doctors had to operate on a cancerous mole on his forehead that threatened to end his football career. The operation to remove it carried risk: it came close to a nerve on his neck that could have affected the movement of his arms.

When he woke up from surgery, the first thing he did was cock his arm back and test his throwing motion. All good.

“I always grew up believing that if I put God’s priorities first, that He would help me in every other aspect of life,” McKee said.

Maybe it was divine intervention at work a few years later, when McKee came back into the game after getting the wind knocked out of him by Kayvon Thibodeaux in the final minutes of a showdown against No. 3 Oregon. With just over a minute left in the game, he led Stanford on an unbelievable 86-yard drive and tied the game on an untimed down, before winning it in overtime. Cheering on the sideline was Sanders, who punched in a rushing touchdown against the Ducks earlier in the second quarter.

Or maybe it was just talent. Despite their differences in getting to the Farm, both McKee and Sanders have made their mark on the team. McKee’s arm talent has been the bright spot in a rocky season for the Cardinal. He’s broken Stanford quarterback records for touchdowns in their first career starts and scalped two ranked teams.

Sanders, meanwhile, has brought a unique wrinkle to the Stanford offense in an option package taken straight from the Air Force playbook that’s been deadly on the goal line. His versatility has helped the Cardinal too. When injuries left Stanford thin at running back and wide receiver, Sanders joined those position groups at practice to help fill the numbers. Hence his new joke: “I’m like a Swiss Air Force knife!”

Off the field, McKee and Sanders quickly found they had a lot to bond over. They spend evenings before games doing Bible study together. They’re keeping score in just about every sport and game they can keep track of — McKee says he has the edge in volleyball and ping pong, and they’re about even in spikeball, though Sanders might disagree.

Even in their wildly different paths to Stanford, they’ve found something in common to talk about.

“He compares Stanford to the Academy, I compare Stanford or the U.S. to Brazil, and we talk about different people that we’ve met,” McKee said.

A love of people and community might be the common factor between McKee and Sanders. Ask their coaches and teammates about the duo, and that’s what they’ll tell you.

“He’s uplifting,” said offensive coordinator Tavita Pritchard of McKee. “Guys love being around him. He loves his teammates.”

It’s rubbed off on head coach David Shaw, who noticed McKee’s positivity from day one.

“Tanner’s personality has never changed since we first reached out to him in his junior year,” Shaw said. “I think part of it is all that he’s gone through. He’s appreciative of every day of life. And that’s how it comes out.”

As for Sanders? Shaw remembers how the team reacted the first time Sanders ran for a first down, a one yard plunge on third and short against Cal in 2020.

Fifth-year fullback Houston Heimuli was in on the play three games later, when Sanders scored his first touchdown against UCLA.

“The more I play with him, I’m like, ‘Man, I want this dude to succeed,’ ” Heimuli said of Sanders.

McKee will continue to grow as a quarterback, but after this year, success will mean something other than football for Sanders. After he completes his masters’ degree in Management Science and Engineering, he’ll move to an Air Force base to work as an engineer and eventually teach at the Air Force Academy. But beyond that, he wants to return to a business school and work in social enterprise.

“There’s a current narrative that Black and brown boys and girls, we can only make it out of our situations by playing sports or rapping and stuff like that,” Sanders said. “I just want to be able to show people that we can be leaders, we can be business CEOs, we can be Air Force officers… we can do anything that we want to be.”

McKee’s seen Sanders’ passion for service firsthand on trips with his teammate to read at a local elementary school. Besides improving how he sees post-snap rotations, McKee said he wants to keep growing as a person and finding ways to help his community. Sanders inspires him with how quickly he turns ideas for service into action.

Sanders, meanwhile, said he’s watched McKee grow as a quarterback and a leader in his first year as a starter — rallying teammates, leading meetings and keeping the team’s effort up over a long and gruelling season. And he admires that McKee still finds the time to be there for his friends along the way.

Ping pong rivalries and backgrounds aside, their greatest similarity might be their deep respect for one another.

“I feel like Isaiah just pushes me to be my best self,” McKee said.

“I’m proud of him, as a friend,” Sanders said. “Just excited to watch where he goes from here.”

A condensed version of this article appeared in the Nov. 21 print issue of The Stanford Daily.