An Axe to Grind: the Stanford Axe Committee renews their rivalry 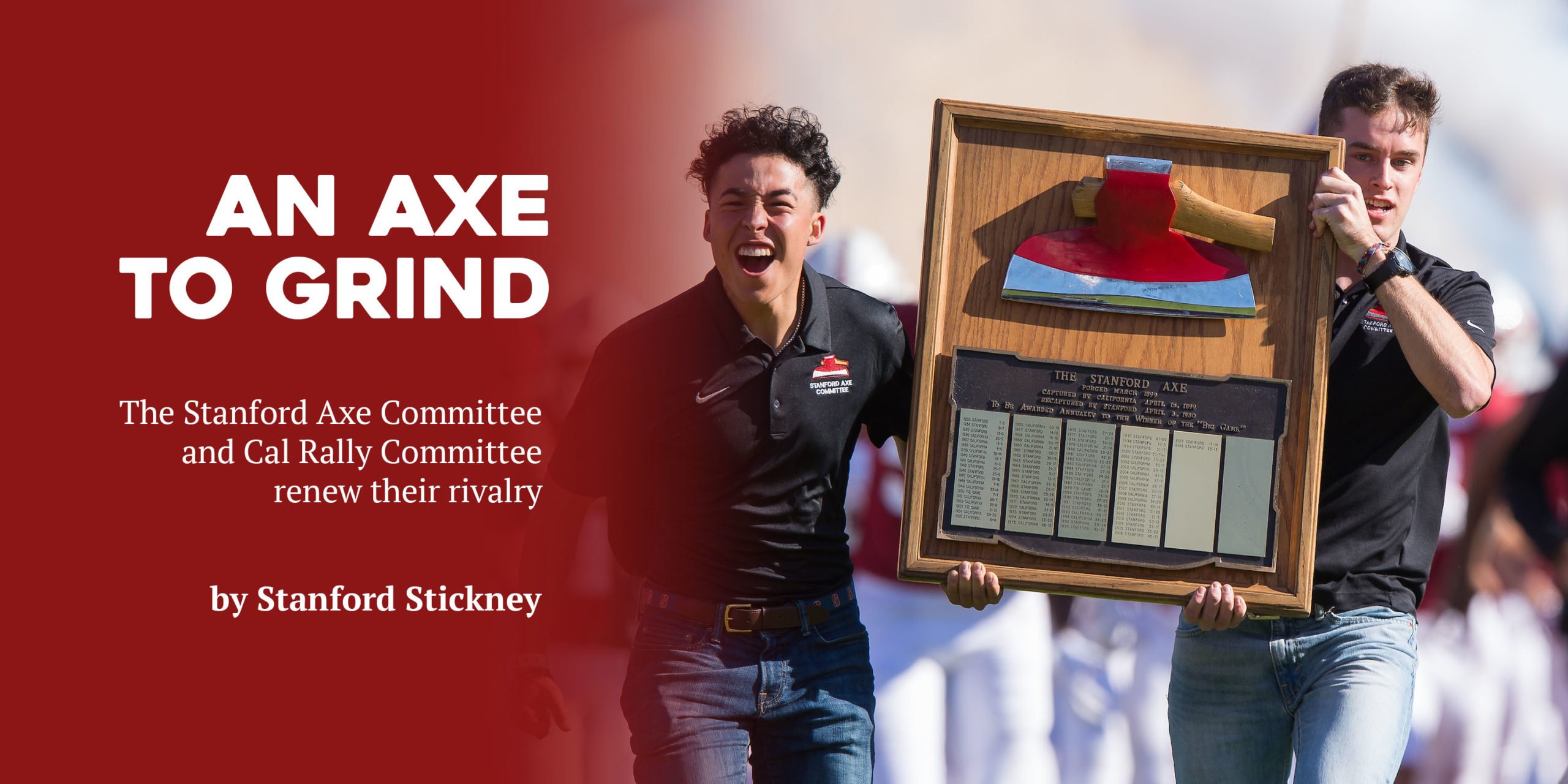 Big Game Week, now in its 124th year, heralds the age-old rivalry that unifies institutions in fervent opposition against the other. The culmination of a season is answered with, “Who won the Big Game?”

A disappointing stretch in football can be redeemed and a near perfect season ruined by the singular loss or a play that determines the game. Cal devotees cite the 1982 game, namely “The Play,” with pride. In response, Stanford fans point out that the Cal running back for “The Play” is serving a life sentence.

But the history and culture of the Big Game extends beyond the football stadiums themselves and into the student body at large. Folklore is born from this competition. History builds upon itself, and new generations carry the mantle — a weight borne especially by the schools’ respective student-run spirit committees.

Across the Bay, the UC Rally Committee has kept its original name and signature logo of yellow and blue rugby stripes since its inception in 1901.

Both organizations wave their respective colors, blow a whistle or cannon in victory and are in charge of cultivating school spirit.

As the clock winds down in the last five minutes of the Big Game, look for the bearers of the Stanford Axe on the sideline at the Stanford Stadium and the opposing school that hopes to take possession. This event is known as “The Stare Down,” and it happens a few minutes prior to the potential transfer of the coveted and rarely seen Axe. During the majority of the year, the Axe, when won by the Cardinal, is stored securely in the Home of Champions.

This year, the Stanford Axe Committee is chaired by Jared Diaz ’23, a mechanical engineering major. On the sideline at Big Game, he will be surrounded by his brave and most trusted members, who accompany the sacred relic.

“There is a very happy time to hate a horrible, horrible university on the other side,” Diaz said, regarding what Big Game Week means to him.

And on the opposite sideline, guiding the UC Rally Committee, among others, is chairwoman Kristina Hernandez ‘22, an industrial engineering and operations research major. She, too, will have her loyal squad ready to receive the Axe if fortune smiles upon the Bears.

“This is the one time of the year everyone bleeds blue and gold,” Hernadez said, “Stanfurd has no, ‘Go Bears’ equivalent. Their life revolves around us: ‘Beat Cal.’”

The amount of time and effort the committee members on both sides contribute for love of school and sake of university camaraderie is undeniable. Festive lights shine on towers at both schools: Hoover Tower at 285 feet and the Campanile at 307 feet.

With 70 members strong on the Stanford front matched and exceeded by 150 members deep from Cal, both committees have excelled in recruiting, preserving school tradition through tumultuous times of World Wars and pandemics. The Big Game unifies these great schools in perpetual spirited competition.