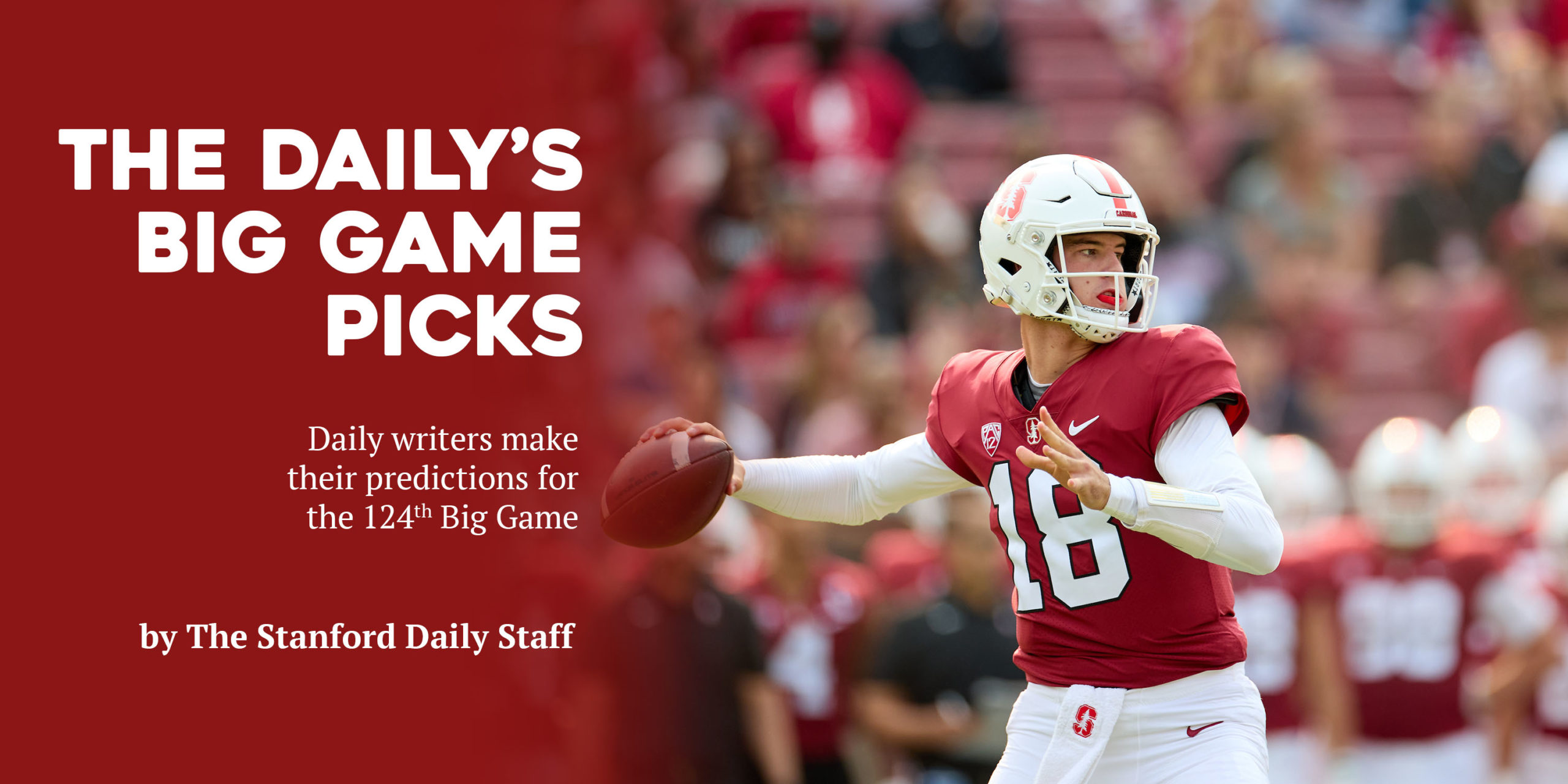 Tanner McKee #18 of the Stanford Cardinal passes the ball during a game between UCLA and Stanford Football at Stanford Stadium on September 25, 2021 in Stanford, California. (Photo: BOB DREDIN/isiphotos.com)

Stanford (3-7, 2-6 Pac-12) will face Cal (3-6, 2-4 Pac-12) this Saturday for the 124th Big Game — a series that Stanford historically leads. The last four Big Games have been decided by an average of just 4.5 points. Will this year’s match up be equally close? Our writers share their predictions.

Cybele Zhang, Football Desk Editor: Stanford 16, Cal 13 — A third of the Cal team has been out for the last week with COVID-19, which means the Golden Bears haven’t been practicing as usual. While this extra time might mean more rest and film review, I think the Berkeley players’ minds have been elsewhere — Chase Garbers taking to Twitter, for example. This will be a rough game to watch with neither side playing particularly well, but I think fifth-year linebacker Gabe Reid and the Stanford defense can top the Bears’ lackluster offense and edge out a win, though it’ll probably come down to the fourth quarter — especially if the Cardinal struggle to score early again. Despite the injuries, Stanford’s players need to fight like their lives depend on it (a feat they haven’t accomplished since playing Oregon) because a few Cardinal coaches might find it hard to defend their jobs postseason if the losing skid persists.

Noah Maltzman, Contributing Writer: Stanford 23, Cal 13 — After having a large portion of a team unable to play or practice, Cal will be rusty. The lack of training and in-person preparation for the Big Game is very detrimental to their chances of winning. That being said, Stanford has not had the most impressive season either. With both teams currently at three wins, it is hard to say which team has had a more disappointing season. Despite not playing for bowl eligibility, both teams are playing for The Axe and need to play with a heightened intensity and vigor. In addition, sophomore quarterback Tanner McKee most likely being out with injury could give freshman Ari Patu a chance to shine at home. However, with a defense third in the Pac-12 for points allowed and fourth in the Pac-12 for yards given up per game, the Stanford offense may struggle, leading to a lower scoring game.

Sofia Scekic, Deputy Sports Editor: Stanford 24, Cal 21 — Like Cybele and Noah already noted, a substantial portion of Cal’s football team has not been able to practice due to COVID-19. While some might say this could be beneficial to allow players an extra week to heal from injuries and give their body some extra rest, it’s also likely very disruptive to their training schedule and will do more harm than good. Stanford, meanwhile, is riding a five-game losing streak and should be extra motivated to win this game in order to snap out of the slump. Bowl eligibility is out of the question for both teams, so they’re playing for pride at this point. I think the fact that Stanford has been able to practice consistently the last two weeks while Cal has dealt with the added distraction of COVID cases should just barely put Stanford on top in this 124th edition of Big Game.

Shan Reddy, Senior Staff Writer: Stanford 17, Cal 13 —While the Bears have been battered by injury, they have been able to put up points when helmed by quarterback Chase Garbers. However, it will be the final Big Game for most of the players on Stanford’s experienced defense. Meanwhile, the Cal defense has largely shut down opposing rushing attacks; expect many three-and-out drives for the Cardinal offense. This will be a low-scoring affair for two struggling teams loaded with starters playing for a good memory to end their college football careers.

Jeremy Rubin, Executive Editor for Print: Stanford 25, Cal 18 — Scoragami time! I expect a weird game in a weird season for Stanford, who knocked off then-No. 3 Oregon and then promptly dropped five straight games. I’m not quite sure how each of the teams will get these scores (six Cardinal field goals and a touchdown? Have a day Joshua Karty), but I am quite sure that this is what the final score will look like. Stanford shuts down the Golden Bears with one of its best defensive performances of the season, Cal returns from COVID-19 rusty and The Axe stays on The Farm.

Jibriel Taha, Staff Writer: Stanford 24, Cal 20 — Stanford is in free fall, but the fanfare of rivalry week and getting to host the game this year should help get them on their feet. Two of the most important players to the Stanford squad, Tanner McKee and junior CB Kyu Blu Kelly, are both listed as probable. Junior safety Jonathan McGill is expected to make his first appearance of the season. The key names that Stanford gets back, combined with facing a team fresh off of a COVID-19 debacle, gives the Cardinal the edge.

Daniel Wu, Senior Staff Writer: Stanford 27, Cal 24 — Tanner McKee is back, and that’s all that matters. His arm talent will be just enough to get Stanford across the line against a Cal team that lost a week of practice to COVID-19 protocols. Don’t count out Cal quarterback Chase Garbers and a Bears offense that played Oregon close. But overlooked in Stanford’s loss to Oregon State was a Cardinal defensive performance that showed at least a pulse against the top rushing team in the conference, holding running back BJ Baylor to under 100 yards and stopping the Beavers on a key fourth down. If Stanford can step it up at home with The Axe on the line, they’ll hold off a much weaker Cal attack.

Zach Zafran, Contributing Writer: Stanford 20, Cal 13 — If Tanner McKee returns to the gridiron, the Stanford football team we’ll see on Saturday is going to be a whole lot different than the one that has shown up in the past few weeks. Now, that’s not saying much, considering the Cardinal have dropped five straight and looked far from impressive on both sides of the ball. But the return of the gunslinger at least puts someone at the helm who has proven they can command the offense and take over the game. Plus, Cal has not seen the field in weeks due to their COVID situation. Even when they were able to compete, their last outing saw them drop a game to Arizona, who held a nation-high losing streak of 20 games. The expectations are low for the Golden Bears.

Gavin McDonell, Desk Editor: Stanford 17, Cal 20 — This one hurts to write, but I think The Axe is returning to Berkeley this year. After Stanford’s 52-7 loss to Utah and 35-14 loss to Oregon State, I’m not feeling particularly optimistic about the Cardinal’s chances. As Zach noted, the potential return of McKee could turn the tides, but this is a big “if”. In any event, I see the game coming down to the wire, perhaps decided by a last-minute field goal by the Bears.

Jordan John Lee, Desk Editor: Stanford 10, Cal 7 — With three wins for each program, I think this 124th matchup will be a toss-up. Both teams have struggled to find consistency since the beginning of the season. After Stanford’s unlikely upset over Oregon, the Cardinal could not sustain their momentum due to unfortunate injuries among star players Tanner McKee and Brycen Tremayne. Cal’s COVID situation has limited their experience on the field. The uncertainty each team has surrounding it’s opponent’s strategy leads me predict a low-scoring game with the Cardinal taking the advantage purely because of playing time and the home-field advantage.

Arman Kassam, Staff Writer: Stanford 24, Cal 18 — Stanford’s recent set of games hasn’t given me much optimism about the course of Big Game, but out of the sheer naiveté of boundless, youthful optimism I will stand by my alma mater and predict victory. I also foresee incredible hot dog sales, and, yes, the return of vaporwave as a legitimate aesthetic. Huzzah.

Ells Boone, Desk Editor: Stanford 31, Cal 17 — This is really all the Cardinal have left to play for this season, so you know they will come out amped up on Saturday. This is where it is great having a head coach who played at Stanford and knows just how much the rivalry means. Tanner McKee is probable to play, so the offense has the chance to get back to producing points. With Cal coming off a big COVID-19 pause, their players will not be in the same level of shape as the Cardinal, so David Shaw needs to use that to his advantage. If Stanford’s offense can get back to par, I don’t think Cal can keep the pace.

The Daily Sports Staff is the collective moniker of an overworked, beleaguered, underpaid collection of sportswriters that feel comfortable enough with their own self-identities to give up any sense of individualism for the good of the sports section. To contact The Daily Sports Staff, send an email to the managing editor(s) of the sports staff (sports 'at' stanforddaily.com), keepers of the souls of those sportswriters.