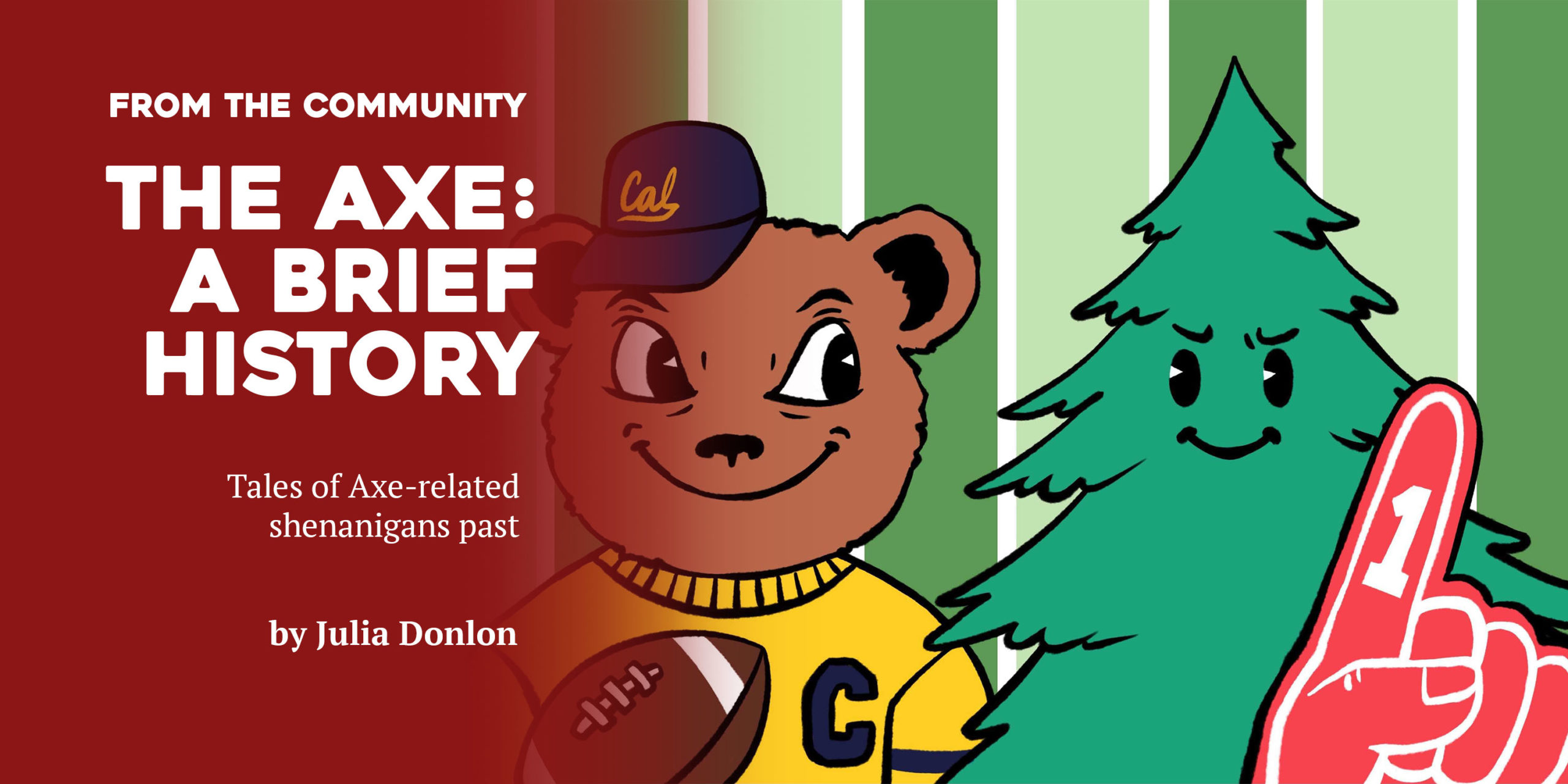 October has come to a close, and Stanford students have survived the spooky season scares. Rapidly approaching is the one day a year when Stanford may be called a “football school” with any level of confidence. Gather round the fire, for Big Game season is here, and you’re due for your annual dose of Axe lore.

The Stanford Axe was forged in 1899 and promptly stolen by some Berkeley hooligans looking for a fight. Under “right by conquest”, and definitely not a property rights violation, they managed to hold onto it for the next 31 years (but who’s counting?), until some Stanford students executed the strategy of a lifetime and took it back. In a heist that rivals the plots of all four Ocean’s movies, the students used a combination of Cal disguises, camera flashes, fake search parties and three different getaway cars to safely return the Axe to Palo Alto. Pause for a collective sigh of relief, for the Axe was finally home.

Three years down the line, someone decided it was too easy to let the Axe live out a long, peaceful life on sunny Stanford campus, and it became the trophy we know today: awarded annually to the winner of November’s Big Game. A healthy compromise, right? Wrong. Stanford and Cal students are not ones to play fair when it comes to the Axe. Chaos, of course, ensues.

Now, it might just be me, but it seems like college students in the 20th century were on something else when it came to school spirit. Big Game history boasts a long list of antics, including and definitely not limited to: the Stanford insignia painted on the hills of Berkeley, leaflets demanding surrender dropped from planes, an unleashing of mice upon an unfortunate dorm hall and one guy managing to steal the Axe for a couple of days and carve his name into the handle. The “Beat Cal” banner on Green Library sends the message, but it’s nowhere near as funny as impersonating Cal fans and telling their Rally Committee you “want to take a picture” with the Axe before running off with it. These guys practically invented devious licks.

Unfortunately, no Stanford trickster is perfect. The Big Game blunder of the century is infamously dubbed “The Play”, in which the Stanford band prematurely rushed the field as the Cal team completed five (questionably legal) lateral passes for a touchdown and secured the Axe. Maybe stick to “All Right Now” so we avoid another crushing ending (literally crushing if you ask that trombone player in the endzone). Stanford fans would rather tell you about the Revenge of The Play, in which both teams rushed the field: the Cal fans thinking they’d won after an interception in the endzone (ha! Only a bunch of fools would rush the field with precious seconds left on the clock), and the Stanford fans when they really did win the game on a last second, into-the-wind, 39-yard field goal.

This year’s student section certainly hasn’t been slacking either. The UCLA game in September broke records with more than 7,500 students in attendance, and I’ll remind any Berkeley spies who might be reading, Stanford is currently dominating Wikipedia’s Big Game scorecard, with victories in each of four fields: all time series, largest victory, longest win streak and current win streak. It’s looking good for the Card, as long as we maintain our composure until the clock runs out.

On the 39th anniversary of The Play, the Bears and the Cardinal will meet again. Perhaps the presentation of the Axe and the classic Stare Down between the Axe and Rally committees will go off without a hitch. But if this year’s student section is anything like its predecessors, who’s to say we won’t see a little nefarious activity? I’m not endorsing any Axe-related shenanigans, just saying Stanford students should continue to do what they do best on Big Game weekend: put on the rally gear, rush the field, and hold onto the Axe for dear life.