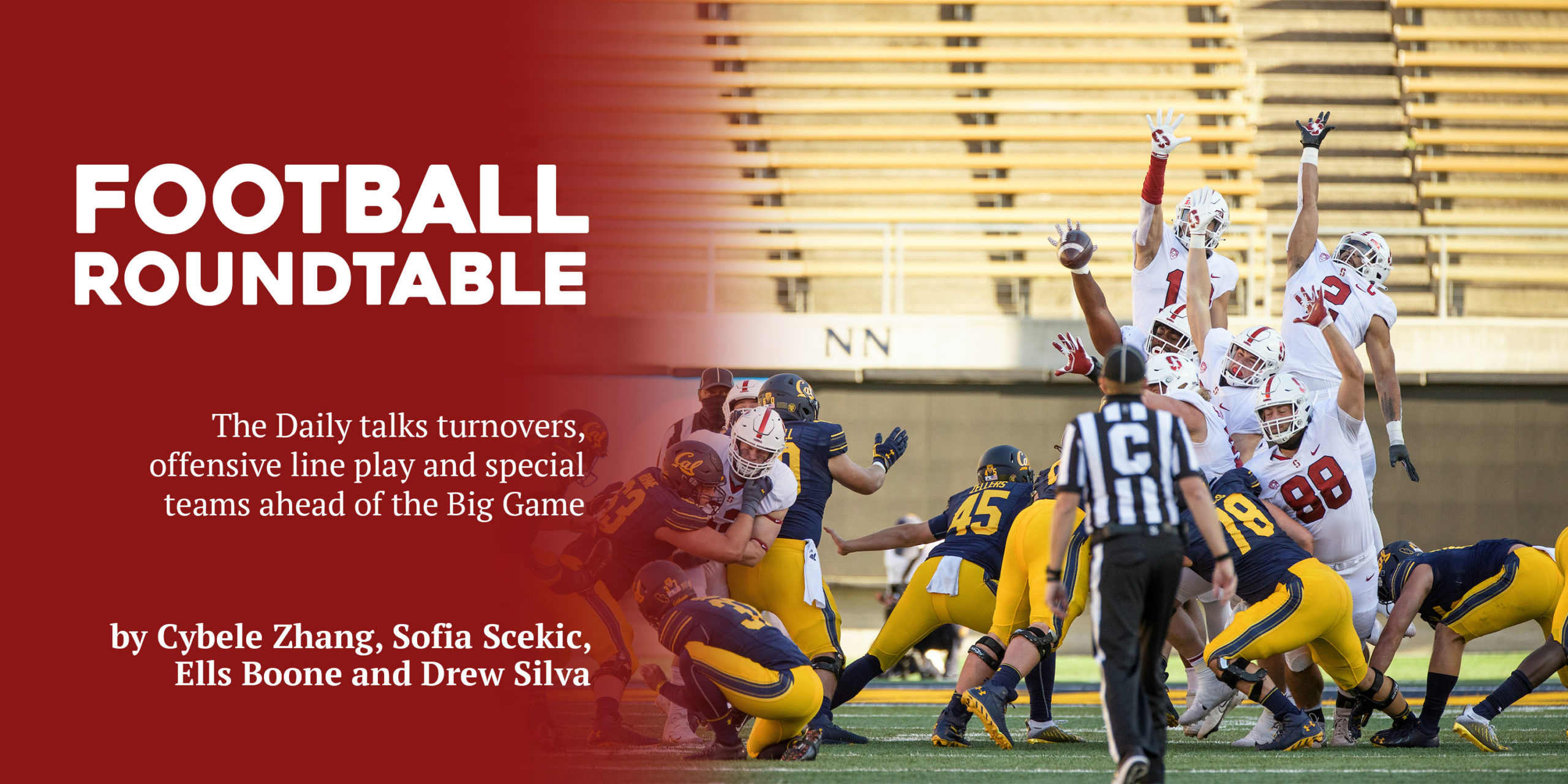 For better or worse, the Golden Bears will enter the game on a bye-week of sorts after being forced to postpone last week’s game due to 44 positive COVID-19 cases within the California program. On the other side, Stanford too seems surprisingly refreshed, with key players like sophomore quarterback Tanner McKee listed as probable and junior safety Jonathan McGill expected to play for the first time this season.

Stanford has won 10 of the last 11 Big Games, but there are no guarantees — as this season has already shown. Sofia Scekic, Ells Boone and Drew Silva discuss turnovers, the offensive line, managing the fourth quarter and special teams heading into Saturday’s showdown.

Cybele Zhang [CZ]: Stanford had three turnovers last week versus Oregon State. Will having McKee back at the Cardinal’s helm correct these possession issues or are there larger problems at play?

Sofia Scekic [SS]: Having McKee back leading the Cardinal’s offense should correct some of these possession issues. McKee has been good at taking care of the football thus far, though he has thrown five interceptions this season. All five were across just two games, however, so he also has six interception-free games and has yet to lose a fumble this season. Junior running back Austin Jones’ fumble last week was inexcusable, but the other two turnovers came on interceptions thrown by quarterbacks Ari Patu, a freshman, and Dylan Plautz, a senior walk-on. Getting McKee back under center should greatly limit turnovers from interceptions.

Ells Boone [EB]: I think McKee’s return will definitely help the Cardinal correct their possession issues. McKee brings a calming presence to the offense. To add on to Sofia’s point, his five interceptions came against two pretty good defenses, Arizona State and Washington. Cal’s defense is not at the same level as those two. So as long as McKee does not have too much rust to shake off, look for Stanford’s offense to (hopefully) be turnover free in Big Game.

Drew Silva [DS]: As Sofia and Ells mentioned, all five of McKee’s interceptions came against Arizona State or Washington — two of the three best passing defenses in the Pac-12. While the absence of McKee certainly cannot be blamed for running backs’ ball security, his return should eliminate some of the turnovers made by the inexperienced Patu and Plautz.

CZ: In Tuesday’s press conference, head coach David Shaw announced that junior offensive guard Branson Bragg will miss the remainder of the season. The Stanford offensive line has already struggled arguably more than any other position group this season; what does his loss mean for the offense? Will the Cardinal ever truly establish a run game?

SS: It’s a little too late in the season for the Cardinal to establish a run game, particularly now that they’ve lost one of their better linemen. Turning the offense back over to McKee — if he’s able to return this week — combined with the recent return of players like senior wide receiver Michael Wilson, should help with a lot of the Cardinal’s offensive struggles. The rest of the offensive line and running backs Jones and fellow junior Nathaniel Peat, are going to have to do what they can to take some of the pressure off of McKee in the last two weeks. But I can’t see Jones, Peat and the O-line turning it around to the point we can say they’ll have truly established a run game.

EB: This loss of course is big for Stanford as Bragg is arguably the best linemen the Cardinal have. Even before the loss of Bragg, I think it was too late in the season for Stanford to (finally) establish its run game, but now it seems like an even slimmer possibility. At this point, the offensive line needs to be able to give McKee enough time to get the ball out of the pocket.

DS: At this point in the season, like Sofia and Ells have said, Stanford’s hopes of establishing the run game are slim to none. Even before Bragg’s injury, the Cardinal were  the only team in the conference to average less than 100 rushing yards per game. However, Stanford has won games this season with a struggling offensive line and could certainly win another.

SS: I think this week we’ll see the opposite trend; I predict that Stanford will start out slowly as McKee gets back into the swing of the game and will ultimately finish strong with a victory. On offense, the Cardinal will need to put together longer drives and protect the ball late in the game to help keep their defense off the field. While the defense is on the field near the end of the game, it will need to play against Cal’s two-minute offense well enough to prevent big plays that gain a lot of yardage and prevent another last-minute score, like we saw in the 122nd Big Game. I do see this year’s game coming down to the fourth quarter, but if Stanford can protect the ball and keep the Bears’ offense off the field, the Cardinal should come out with the win.

EB: I agree with Sofia. I think Stanford will get off to a slow start, but build some momentum and start to take over the game as it goes along. In order to ensure they do so, the Cardinal defense will have to get some stops. I am confident that McKee can lead Stanford to a victory, but the defense will need to step up, especially in the fourth quarter.

DS: I agree that the offense will take some time to find its groove as McKee takes the field for the first time since the loss against Washington. I would not be surprised if the Cardinal fall behind early, but if the defense can contain the Golden Bears’ offense and keep it close in the first half, I think Stanford will be in a great position to secure the win. I expect the Cardinal to win the second half, and one or two big fourth-quarter plays could likely end up deciding this game.

CZ: The 123rd Big Game ended with a blocked PAT by now-senior defensive end and co-captain Thomas Booker — dubbed by some as “The Block.” The Bears’ extra point would have tied the game, but instead the Cardinal celebrated and reclaimed The Axe. What role might special teams play this week?

SS: While the special teams heroics of last year’s big game made for one of the more exciting Big Games in recent memory, I don’t think we’re going to see another game that comes down to the special teams unit making the bigger plays. McKee has been able to finish drives this season, accounting for 18 touchdowns across eight games, and the presence of reliable receivers like Wilson who can stretch the field should call for more touchdowns and less time on the field for the special teams unit. Stanford’s sophomore kicker Joshua Karty has had a solid season, however, and has shown he has kicking range — his season-long is 51 yards and has also hit multiple times from 45+ yards. Cal kicker Dario Longhetto has also hit nearly 75% of his field goals this season with a long of 51 yards and has yet to miss an extra point. If this game does come down to the special teams unit, both teams have reliable kickers, and it’s a toss-up who’d come away with The Axe.

EB: Special teams always play a big role. It will be important to win the field position battle on punts, something the Cardinal have struggled with of late. Also, with both teams having reliable kickers and struggling offenses, it could come down to a kicking contest. Any advantage Stanford can gain from its special teams unit, it needs to take advantage of.

DS: If the Cardinal offense struggles in the first half, junior punter Ryan Sanborn will have to ensure that California’s offense is not given good field position. Both teams should be confident in their kickers with the seasons they have had so far, and I expect at least one of Karty and Longhetto to make a pivotal, potentially game-winning field goal towards the end of this game.

Cybele Zhang '22 is a Senior Staff Writer and Desk Editor from Los Angeles. She is double majoring in English Literature with Honors and German Studies and previously served as Sports Editor — Vol. 255, 257 and 258.Sofia Scekic '22 is a former managing editor for the sports section. She is from Wisconsin and is studying Public Policy. An avid Green Bay Packers fan, she has watched nearly every game for the past nine years. Contact her at sscekic 'at' stanforddaily.com.Ells Boone is the managing editor for the sports section. He is a junior from Virginia Beach, Virginia, studying communication. When not chasing after rebounds in Maples Pavilion or recording a podcast with Jibriel Taha, you can find him at TAP or watching his favorite Premier League team, Tottenham Hotspur, play. Contact him at eboone24 'at' stanforddaily.com.Drew Silva is a writer for the sports section. He is a junior from Pawtucket, Rhode Island studying computer science and symbolic systems. In his free time, he enjoys watching Executive Editor Tammer Bagdasarian play blackjack. You can find him watching NFL Redzone on Sundays.