This Big Game, Stanford plays for The Axe and the program 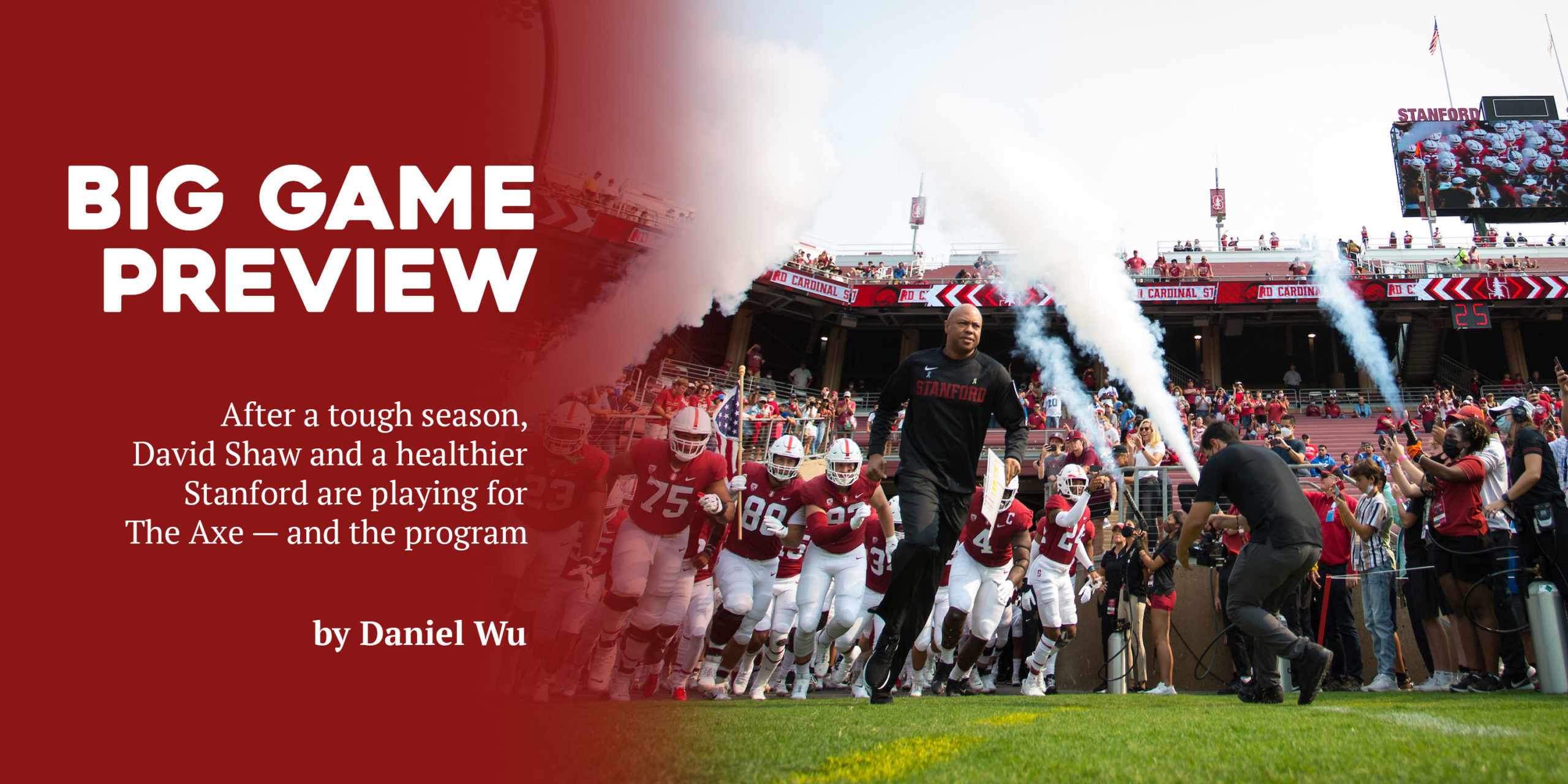 In the back of Stanford football’s team-auditorium, there’s a picture of the 2020 team’s seniors holding The Axe.

“That’s something we always talk about,” said fifth-year outside linebacker Gabe Reid on Tuesday. “At the end of the week, we want to have our seniors up there.”

So ignore any suggestion that the stakes aren’t as high for the 124th Big Game, when Stanford (3-7, 2-6 Pac-12) hosts California (3-6, 2-4 Pac-12) in a battle for the bottom of the Pac-12 North. This is the Cardinal’s best remaining chance to put aside a disastrous mid-season collapse and remind themselves what it feels like to win — and to do it against their most important opponent.

“It’s not about any of the previous games,” said head coach David Shaw. “It’s not about next week… This is Big Game week, and that’s what our guys are focused on: trying to keep The Axe for the seniors on our football team.”

Shaw may not like to look back, but Stanford’s struggles after upsetting No. 3 Oregon over a month ago loom large in the context of this year’s rivalry game. Shaw’s first losing season in 2019 was punctuated by his first loss to Cal.

Reclaiming The Axe over the pandemic-shortened season in 2020 helped Stanford recover momentum following the lackluster 2019 season, but the team’s freefall this season threatens to revive doubts about a program that once had Pac-12 Championship standards.

Shaw has never entered Big Game week on a five-game losing streak. His team, sitting at only three wins with two games to play, teeters on the brink of an even worse record than the 4-8 nadir of 2019.

This year, losing The Axe again might be one blow too many.

“It’s been a tough season,” said senior wide receiver Michael Wilson. “So to put a cherry on top and win The Axe in front of our fans is going to be really special.”

Thankfully, Stanford should make its stand with starting quarterback Tanner McKee back under center. Shaw said on Tuesday that the sophomore is probable for Saturday’s game, and the last two weeks have shown how indispensable McKee’s arm talent is for the team. Without QB1, the Cardinal put up just 21 points in two games, while playing four quarterbacks who combined for two touchdowns, three interceptions and a meager 179 passing yards.

McKee has been sidelined for two weeks with a knee injury but was off crutches and throwing in practice before the Oregon State game. Shaw stated he won’t dial things back for his starter if McKee is good to return.

“That might be the one dirty look he’d ever give me,” Shaw said when asked if he would reduce McKee’s playbook. “If he’s back and ready to go, he understands this offense extremely well, so we want to make sure he’s got the full complement.”

McKee’s arm talent should allow Stanford’s pass catchers to finally shine after being limited by the carousel of backup quarterbacks. Junior wide receiver Elijah Higgins is questionable for Saturday and sophomore wide receiver John Humphreys has been quiet since returning from injury, but in their absence sophomore tight end Benjamin Yurosek has quickly emerged as the Cardinal’s next dominant pass-catcher at the position. Senior wide receiver Michael Wilson is also due for a comeback in his first game with McKee after returning from an injury of his own — the Simi Valley-native led the Cardinal in receiving yards and caught a key touchdown in Stanford’s last Big Game win.

Stanford also gets several important players back on defense. Junior cornerback Kyu Blu Kelly, senior inside linebacker Ricky Miezan and junior safety Jonathan McGill are all probable to play on Saturday, according to Shaw. McGill, originally Stanford’s starter at free safety, will make his season debut after missing all ten games this year due to injury.

The Cardinal will face off against a confusing Cal team that hardly owns an imposing resume but has played better than its record. The Golden Bears have a win against Oregon State and were a few yards away from taking conference leader Oregon to overtime. California, however, is also a team that lost to Nevada and Arizona.

Which version of Cal shows up on Saturday will likely depend on how the program recovers from an outbreak of 44 COVID-19 cases that forced them to postpone last week’s matchup against USC. Shaw said on Tuesday that the two programs have been in contact and that Cal has reported they’ll be able to field a team.

If Berkeley can shake off the rust from not practicing while in isolation, the Bears could pose a challenge for Stanford. The Cardinal need no reminding that veteran quarterback Chase Garbers ran in the game-winning touchdown in Palo Alto two years ago. McKee will be tested by veteran safety Elijah Hicks, who has three interceptions and three forced fumbles on the season. And perhaps most worryingly for the worst rushing defense in the Pac-12, Cal’s attack has been defined by a bruising running game.

“A tough, tough team running the ball,” Reid said. “Gritty… it’s your typical Cal offense. So we’re excited to be able to set the tone and try and stop the run first.”

Stanford hasn’t done that in a long time. But in a season where no Pac-12 team has been immune to an upset and in a rivalry that was last decided on a blocked extra point attempt, all the bets are off.

“The last few years…these have been tight games, hard fought games,” Shaw said of the Big Game. “This rivalry is as big as ever.”

No matter what, Stanford’s record will pose Shaw and his program serious questions after this season.

When the young core of this Stanford team returns to the team’s auditorium next year, it’ll make all the difference if a photo of the Cardinal holding The Axe is waiting for them.