Hey! I’m Noah, and I’m here to tell you about games that I think are worth sinking time into while most of us are spending spring quarter at home instead of on campus. This is a time of stress and uncertainty for all of us, and one thing that has always been able to provide solace, at least for me, is video games. Since the start of quarantine, I’ve been taking a trip down memory lane to revisit some of the games that have stuck with me over the years. Hopefully my writing about them inspires you to give them a try as well. I’ll be writing about games (mostly narrative-driven, freeware games) on a semi-regular basis, and if you get a chance to play any of them or have any recommendations, feel free to shoot me an email!

Picture this: you’re eight floors deep in this moss-covered dungeon looking for some artifact called the Orb of Zot, and all of a sudden you find yourself surrounded by a horde of sweaty orcs, rabid wargs and a deadly Bone Serpent. You’ve been fending them off for a good few minutes with just your bare hands, but you’re bleeding out — this might be the end for you! Luckily, you have a few options. Do you:

A. Continue fighting, hoping that your raw strength will turn the tides of battle,

B. Read an enchanted scroll of teleportation, escaping out of harm’s way,

If you’re like me and chose C, here’s what happens: you narrowly escape through a crack in the mossy rock wall, but one of the wargs chases you down. It’s unfortunately much faster than you and soon mauls you to death, leaving you to die alone on the cold dungeon floor. A black box containing your final possessions appears onscreen, followed by your character’s epitaph. This is “Dungeon Crawl Stone Soup.”

Luckily, death is far from the end of your journey in “Dungeon Crawl Stone Soup.” After lamenting the loss of this ephemeral avatar, you are free to make another character, and another, and another until you finally beat the game and reach the Orb of Zot.

Except you don’t. At least I didn’t, in all my years of playing “Dungeon Crawl Stone Soup” in high school, or “Crawl” for short. My friend and I would always bolt straight to the library computers between classes to play “Crawl” because we could log in and play it in the web browsers of the library’s old computers. We competed every day to come that much closer to actually winning at the game and proving that we were in fact, the champions of “Dungeon Crawl Stone Soup.”

But we never even came close, not in all our years of trying. There are over 100 levels in the game, some of which can go on indefinitely. To actually get the Orb of Zot, you need to plunge through these levels, which range from swamps to snake pits to actual Hell, to find at least three out of 15 Runes of Zot. These Runes are carefully guarded, and nabbing even three of them feels like an Indiana Jones–level feat. Then, and only then, can you acquire the Orb in the deepest floor of the Realm of Zot, and then there’s the challenge of actually bringing it back to the surface. The trickiest part of the whole thing is carrying the Orb back through hordes of demons and pit fiends, all the way back to the door to the Outside.

But maybe let’s take a few steps back. Why are we in this old dungeon in the first place looking for some orb? Wouldn’t we rather be on the beach somewhere looking for our next piña colada? To answer this, we need to look back to the sixth-century C.E. in northern India. Many scholars believe that this is when and where caturaṅga, the predecessor to Chess, first came to be. Like Chess, caturaṅga makes use of figures based on warfare and politics, like kings, knights and chariots. In caturaṅga and Chess, the complexities of warfare are condensed into simple movement abilities for each unit type. A rook moves in a straight line, while a knight moves in an L-shape and can leap over other units.

Much, much later, Chess evolved into tabletop role-playing games like “Dungeons & Dragons,” where people began ascribing names and motives to Chess pieces. Each game had a story, with main characters, side characters, a villain and a plot. But unlike a story in the traditional sense, the players could change the outcome based on skill and luck. And because everything in D&D existed in the players’ imaginations, anything could happen. A wizard could negotiate a cunning deal with a group of bandits to secure safe passage for her caravan. One time in a campaign, I broke into a derelict manor inhabited by a vampire terrorizing the nearby village by chucking my friend through the second-floor window. The only limit is your imagination!

This unparalleled creative freedom inspired college students and programmers in the ’80s to develop computer games that operated in a similar framework. Except instead of creating improvised stories through the spoken word, they used the binary language of computers to create complex role-playing systems. Enter “Rogue”:

To most people this probably looks more like some representation of the inner workings of a computer than a game. But this is “Rogue,” one of the most influential pieces of media of the last 50 years. “Rogue” is a procedurally (randomly) generated dungeon crawler, where the player is prompted to enter a dungeon with promises of loot and riches. Basically, the core gameplay of “Rogue” revolves around making a series of choices. At the start of the game, you choose what kind of character you want to be: a melee fighter, a cunning assassin and a mystic spellcaster are some examples. Each level is filled with traps and monsters meant to kill you, and you are given an assortment of tools from which to choose to succeed in (and live through) these encounters. And if you meet an untimely end, you start back at square one with a fresh character and a new, unfamiliar dungeon to traipse into.

Like in my example with the orcs and the wargs, you often have to make the difficult choice between fight and flight. Mechanically speaking, combat is pretty simple at its core in “Rogue”: if you and an enemy creature are adjacent on the grid-based layout of the dungeon, moving towards the enemy causes you to make a digital dice-roll based attack on it. Here is an artist’s rendition:

But over the course of a playthrough, you can accumulate magical tools, ranged weapons, spells and abilities that add more choices to the pot. A well-prepared dungeon delver might have some potions of healing and scrolls of teleportation to use as a last resort when an encounter goes awry. Or if you’re like me, your backpack will be full of unidentified potions of different colors that you hurl at enemies, hoping that one of them will save your unlucky soul. Either way, at every turn “Rogue” gives the player hard decisions to choose from, making gameplay feel challenging yet rewarding when the player succeeds.

At its core, “Rogue” is mechanically a pretty simple game. It runs in Terminal, and everything in it is rendered in ASCII characters. Because it isn’t much to look at, it relies on randomly generating its world with each playthrough in order to keep you engaged. And because each playthrough is different, dying isn’t so bad after all — you get a whole new world to explore! This ingenious yet economical concept of permadeath and procedural generation spawned a whole genre of games called roguelikes that, due to their simple design, grew exponentially in number since the advent of “Rogue.” Replayability is highly sought after in games, and the randomization factor made it so that players wanted to come back time and again, since each new character could begin a new, unique journey.

The success of roguelikes went on to inspire AAA games like “Diablo” and “Pokemon: Mystery Dungeon” which follow a formula similar to “Rogue.” The use of procedural generation in games led to the creation of “Minecraft,” a tool that was recently used to create a digital simulacrum of Stanford’s campus. Other popular indie offshoots of “Rogue” are “Binding of Isaac,” “FTL: Faster Than Light” and last but certainly not least, “Dungeon Crawl Stone Soup.”

“Dungeon Crawl Stone Soup” is a community-developed offshoot of “Linley’s Dungeon Crawl,” a 1997 roguelike programmed by Linley Henzell. The original “Crawl” looks pretty similar to “Rogue,” a turn-based role-playing game made up of symbols in Terminal. Since then, fans of the game have added on and polished the game’s content, adding graphics, levels, playable species and gods to worship. Anyone can propose a new feature to add to the game, hence the “Stone Soup” part of the game’s title. Unlike the previously mentioned games, “Crawl” sticks very close to the core pillars of gameplay defined forty years ago by “Rogue.” But “Crawl” introduces a vast array of additional gameplay features that make each venture into the dungeon feel fresh and new. 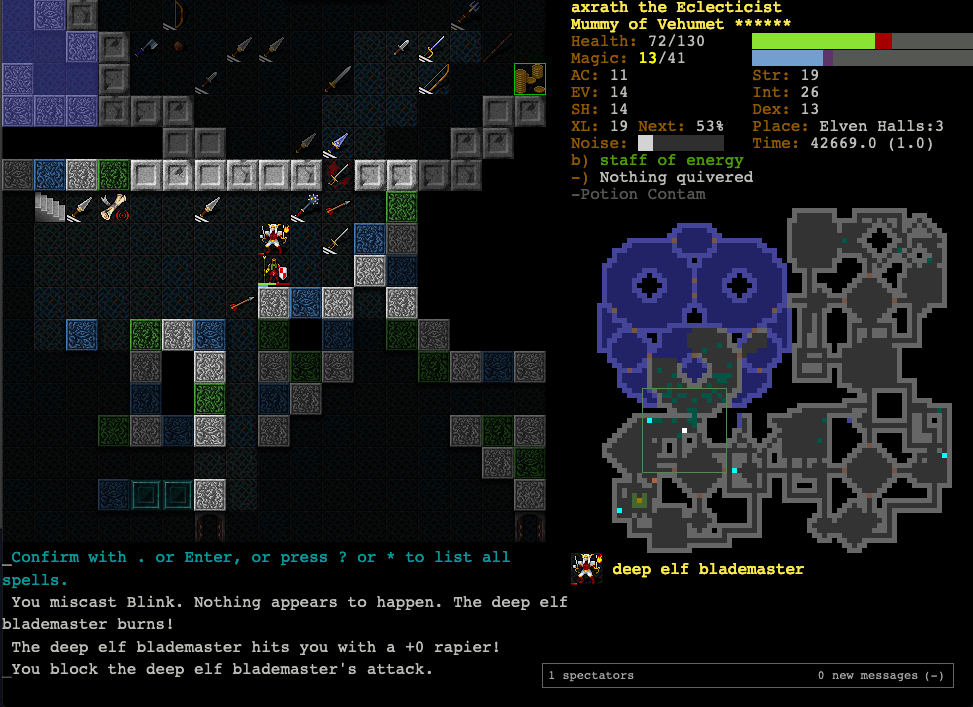 One thing I haven’t touched on is the sheer number of creatures as whom you can play. If you ever get bored of playing as a human fighter, you can embark upon your journey as a mummy, a bird person, or a human-sized ant. You can even play as a sentient cat or octopus (although, as you can imagine, this choice makes navigating the dungeon more tricky). Each of these species adds new challenges to overcome and options for your character to take advantage of, increasing the game’s strategic complexity. 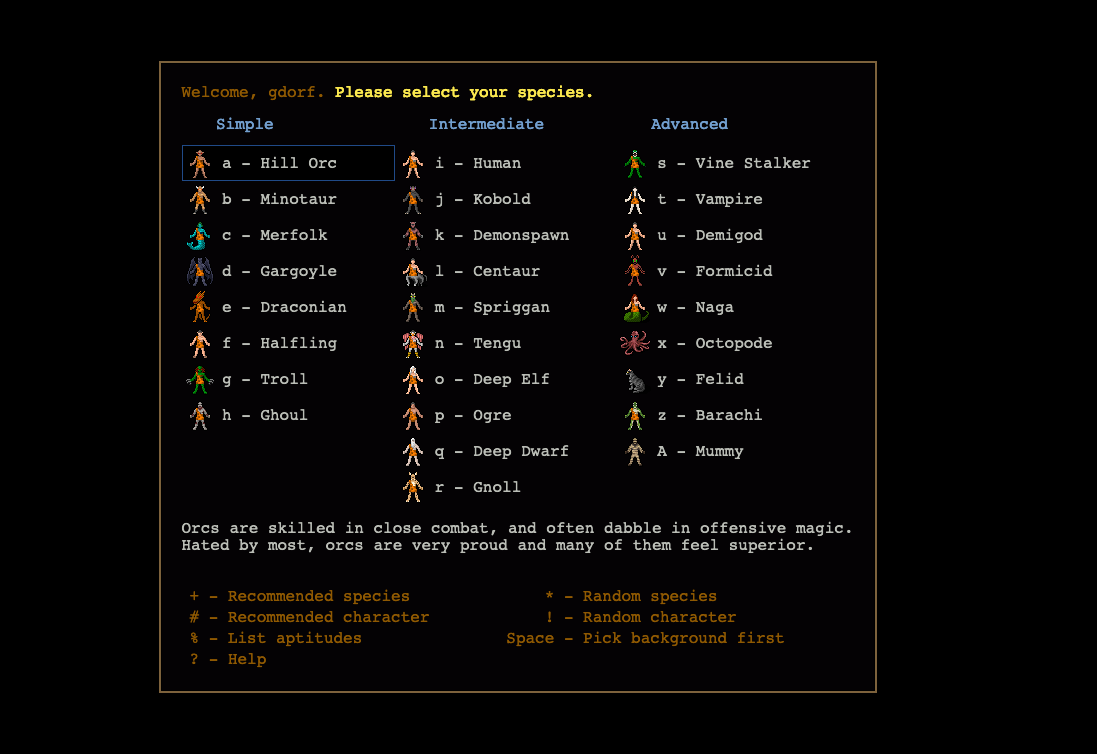 I really can’t understate just how complex the game is — that’s why I find myself coming back to it time and again. I still haven’t tried half of the game’s playable species and classes, and it can be daunting to navigate through all the cool things you can do in this game at first. Here is a smartly written guide that lays out the basics of how to play the game, as well as some good species/class combinations to start out with. If you play the game in your browser, you can also spectate other players’ games to get a feel for how it all works.

“Crawl” is by no means a simple game; out of all the games that I’ve been into, “Crawl” takes the cake in terms of sheer depth of gameplay. There is such a ridiculous amount of content that I haven’t even brought up (because it would take too long), but no amount of crazy anecdotes or fun facts about the game do a better job of describing “Crawl” than just playing the game itself. Whenever I catch a break from brain-straining problem sets, my favorite way to strain my brain and have fun doing it is “Dungeon Crawl Stone Soup.” You can play it here for free: https://crawl.develz.org/