‘My parents won’t be able to cheer for me’: Seniors look back on their final year from a distance 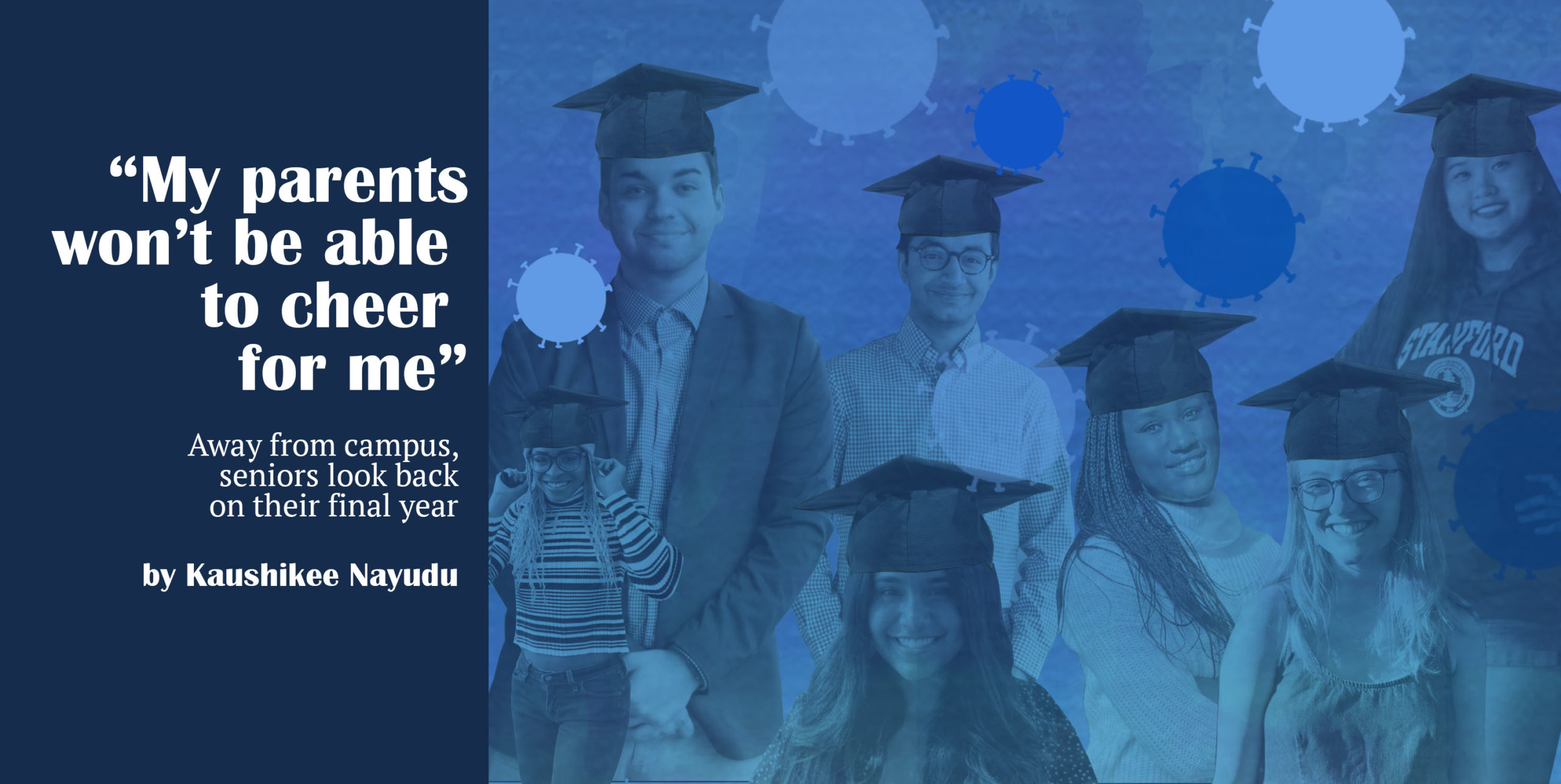 Despite the increasing availability of vaccines and gradual state reopening, the continued effects of the pandemic and associated social distancing guidelines mean that Stanford’s upcoming spring quarter will be far from a traditional “senior spring” for graduating seniors. After four years, their college experience will conclude with online classes, a half-empty campus and a virtual commencement ceremony.

Though Stanford has invited upperclassmen to campus in the spring, it has canceled similar plans twice before. According to an Undergraduate Senate survey, only a little over half of seniors plan on returning to campus.

By the time they graduate, many seniors will have spent more than four quarters away from the University, and some wish they had a more meaningful opportunity to say goodbye to the home they have found on campus.

The Daily spoke to eight graduating seniors to capture their reflections on their time at Stanford and their reactions to the tumultuous ending to their undergraduate career.

Brockbank said that her time at Stanford allowed her to realize her value and worth, while also pushing her to think about the community around her and how her agency can be used as “a tool for positive change.”

Due to COVID-19, the process of trying to secure a job and clarify her postgraduate plans has left her feeling frazzled, she said. In addition to entering a distressed job market, she said it is difficult to find entry-level positions because a lot of organizations are currently prioritizing fulfilling essential roles and do not have the funding to recruit and train new employees.

Brockbank added that attending college during the pandemic has been emotionally and intellectually draining. The mental toll of school has made job hunting even more difficult.

“There are a lot of people at Stanford who are on a very formulaic track where they have their job offer for post graduation lined up since the beginning of their junior year,” she said. “But I think there’s more of a silent majority of us who are not in that situation and maybe feel like a little bit more self-conscious to admit it.”

After facing a constantly evolving final year of college, Brockbank said that seniors are reluctant to invest all of their energy and get their hopes up for the future because the last year has shown them how easily plans can change.

Like Brockbank, Krithika Iyer ’21 M.S. ’21 has also spent much of her time at Stanford advocating for sexual violence prevention. She encouraged students to be critical of the University and pursue opportunities to make it a better place. For her, this comes in the advocacy that she has done during her time at Stanford.

Though she said it is inevitable to make comparisons and feel like you are not doing enough, Iyer encouraged students to trust themselves.

“I think it’s been so important to realize that I’m figuring out things I care about and doing things on my own time and none of that is made easier by comparing myself to others,” she said.

While Iyer said she is still figuring out her post graduate plans, she feels fortunate to have a remote job lined up in New York. She added that moving to a new city and starting a new position feels a lot like being a freshman at Stanford — “a new city where I know very few people, trying to find my community, learning how to navigate a new work-life balance.”

Senn Nwakudu ’21 looks to her time participating in Flying Treehouse, a children’s repertory theatre company, as one of her most meaningful experiences at Stanford. Nwakudu said she loved being able to explore so many sides of herself while having fun and forming a great community.

Nwakudu also appreciated being on campus as a resident assistant (RA) during the pandemic and interacting with other students, even though the position does not look the same as being an RA pre-pandemic.

“I think the fact that I’m able to be in a position of care for some of the other people who are going through the same thing I am has created a very unique bond,” she said.

As a first-generation low-income (FLI) student, Nwakudu said attending a university like Stanford means a lot to her and her family.

Sabrina Suster ’21 said that frosh move-in day was one of her favorite memories from her time at the University. Reflecting on the last four years, she said she wishes that she could relive the newness of Stanford.

“I think it’s really natural to come into Stanford and think it’s going to be perfect and that you’re gonna walk in your first day and have your best friends, but I think what I’ve learned is that nothing in the world is perfect and it’s actually a lot healthier to have a critical outlook,” she said.

Suster said that she wishes she was graduating in different circumstances. However, she explained that COVID-19 has allowed her to embrace uncertainty and be open to new opportunities. She encouraged underclassmen to internalize this mindset early on at Stanford and to pursue their interests without worrying about it fitting into academic or career plans.

Shafat wrote that the communities she found at the Office of Religious Life (ORL) and Markaz were a source of support that allowed her to find “friends who are like my family” and “a home on campus.”

She encouraged underclassmen to spend as much time as possible with friends because she believes that “to do Stanford right …  is to leave with a heart full of memories.”

As an international student from the UK, Jessica De Suza ’21 said she was surprised by how welcoming and kind the Stanford community was. De Suza was heavily involved on campus in several communities, including as a member of Kappa Alpha Theta sorority.

De Suza said one of her favorite Stanford experiences was living in French House as a junior because a strong community existed within the dorm, which was really special to her.

“I think it’s obviously very sad that we’ll be graduating without having spent a year and a quarter with those people that we’ve built relationships with,” De Suza said. “Having one of these really tough lessons during COVID of how to handle crisis, how to be alone at times, I think has also been really important.”

Bihan Jiang ’21 said some of her favorite memories came from spontaneous interactions with faculty and students. She encouraged frosh to reach out to professors early on to explore interests and interact with them outside of class.

“Some of the coolest conversations I’ve had have been with professors in office hours,” Jiang said.

Her favorite moments at the University included walking around campus at night with friends when “it’s very quiet but peaceful.” While it was easy to feel settled and grow complacent in the first few quarters, Jiang said she formed a lot of meaningful friendships throughout her time at Stanford and encouraged students to continuously try to meet new people.

Senior class president David Pantera ’21 said he started his undergraduate career at Stanford with a conviction to leave the University a better place than he found it.  He was heavily involved with student government, including working part-time for the Associated Students of Stanford University (ASSU) and serving on several University committees.

“Looking back on this work, I truly feel like I was able to better our campus,” Pantera wrote.

Reflecting on his time at Stanford, he reminisced on the “boundless beauty of campus and the untamed energy of the student body.” For him, COVID-19 has resulted in a feeling of loss.

“I miss the residents of my dorm, the amazing dining and custodial staff and the inspirational feeling of being in a Stanford classroom,” Pantera wrote. “It hit me only recently: I miss my home.”

Pantera added that, while he was intimidated when he first arrived at the University, he has come to think of the campus as home.

“As I look back on my Stanford career, and plan for the next era of my life, I have many of those same feelings as I did on move-in day: anxiety from the unknown parts of my future, yet excitement from the new,” he wrote. “But I know that Stanford will always be a home for me, and that I will carry it with me wherever I go.”

Kaushikee Nayudu '24 is a staff writer for The Daily. Contact her at knayudu ‘at’ stanforddaily.com.