‘Not like the movies’: Frosh acclimate to college during COVID-19 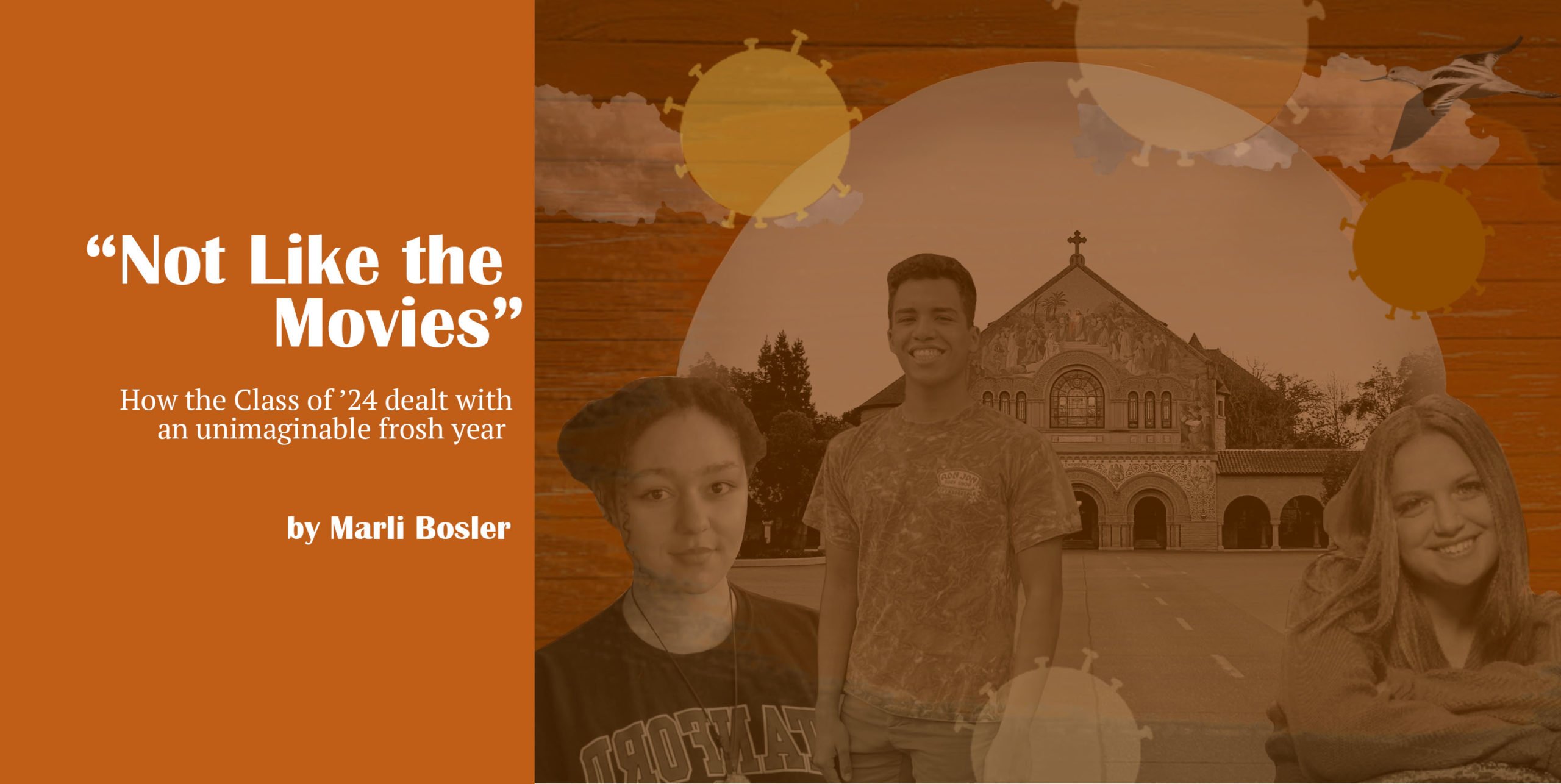 Bright sunlight peaks through your window as you fumble for your phone, eyes still wired shut in defiance of your 8 a.m. alarm. 30 minutes until your first class. Time for coffee, a quick hello to friends in your dorm and a bike ride across a palm tree speckled campus. You’re excited for the upcoming football game and make a mental note to text your friends to make plans. Maybe this weekend you’ll reserve a ZipCar to go to that concert in San Francisco.

For current sophomores, juniors and seniors, this may be a familiar scene — a nostalgic glimpse into a day at Stanford, pre-pandemic. But this nostalgia is largely unfamiliar to this year’s frosh, many of whom have never experienced a day on campus.

Mario Nicolas ’24 is one such frosh. Exploring campus, meeting friends and attending sports events are just a few of the things he was excited about experiencing in college. He said that he was looking forward to a freshman year like he had seen in movies.

Instead, Nicolas’s first year in college has looked a lot more like watching a movie than living it — he spent fall and winter quarter meeting friends and attending classes from behind a computer screen.

Nicolas said that the adjustment to college has been hard because of the online format of school. Compared to his work-life balance in high school, “there’s not the same release,” he said. “You can’t go to a concert or a party to release energy or reward yourself.”

Because Stanford canceled plans to bring frosh to campus in the fall and the winter, Nicolas spent his fall quarter exploring New York with a few fellow Stanford frosh before returning home to Texas for the winter.

Though he has experienced loneliness and doubt amid an isolated year, Nicolas said that he sees “the new normal” as a chance to grow.

“I’m glad that I got to experience something that fell outside of the mold I had been so accustomed to,” he said.

Like Nicolas, Alexa Pollock ’24 said she had high expectations for a college experience like the ones she had seen on her television screen. She imagined her first days at Stanford looking like Pitch Perfect, walking through a lively quad, finding new friends and exploring new interests.

After spending fall quarter in Virginia, she moved to campus in January, and masks and isolation replaced club day and picnics on Meyer Green.

Pollock said that being around other students has helped her feel less alone as she learns to navigate college. “At home, it felt like I was failing and had no idea what I was doing,” she said. “At least here everybody else has no idea what they’re doing, too.”

To connect with other frosh, Pollock said that she has enjoyed attending Frosh Fridays, a  weekly virtual event hosted by Frosh Council.

Although almost all social interaction is virtual, she said that, on the bright side, “at least there’s this shared experience we all have about how it really sucks.”

Living halfway across the country from Stanford in Iowa, Ayanna Minnihan ’24 expressed similar feelings of isolation and yearning for an in-person experience. Although she has never seen campus in person, she said the initial “I’m going to Stanford!” excitement helped motivate her during fall quarter.

After winter quarter was canned, constant Zoom calls from home became her college routine. Minnihan likened Zoom fatigue to “driving on the same road for six hours and not even knowing what you’re looking at anymore.”

Although she has grown more comfortable with reaching out to other Stanford students online, Minnihan said it has been hard to establish close relationships because  “when you’re talking to someone on Zoom, it feels like you’re talking to a video.”

The silver lining to these unexpected circumstances has been learning perseverance, she said. “It’s taught me how to still be successful and still be able to move forward, despite everything else being bad.”

Minnihan said she thinks there might be a “weird transition” when frosh  are allowed on campus, but she is looking forward to it. Making up for lost time, “people will be really, really wild,” she predicted with a laugh.

For Katie Smith ’24, the most exciting thing about college was the prospect of meeting new people from all walks of life. With COVID limiting those opportunities, Smith moved from her home in Indiana to form an off-campus household with a small group of students in Portola Valley, California.

Smith said she was glad to meet a handful of her classmates in person, but she still has some anxieties about the future. “I’ve been so secluded this whole year,” she said. “I won’t really know a lot of people when I eventually go to Stanford.”

According to her, the pandemic has also exacerbated Stanford’s academic pressure. Smith said that she feels that high school inadequately prepared her for a college course load, and that an online environment makes it even harder to “reach out and dive in.”

Without the unifying experience of campus life, Stanford frosh have spent the year in an unprecedented number of locations and under conditions none of them could have predicted. Yet, Nicolas, Minnihan, Pollock and Smith all said that this experience unifies frosh. They all have a virtual first year in common.

While they are not spending their afternoons playing spike ball on Wilbur Field or grabbing a bite to eat at The Axe & Palm, they said that they have found positives in their virtual introduction to Stanford.

“Obviously it’s not the situation we all wanted to be in,” said Smith. “Yet I’m grateful for this experience, and I think I’ll be more even grateful in the future.”

Marli Bosler ’24 is a beat reporter for the Daily from Kirkland, WA. In her free time she enjoys making Spotify playlists and daydreaming about Seattle coffee.