One year and a thousand miles later 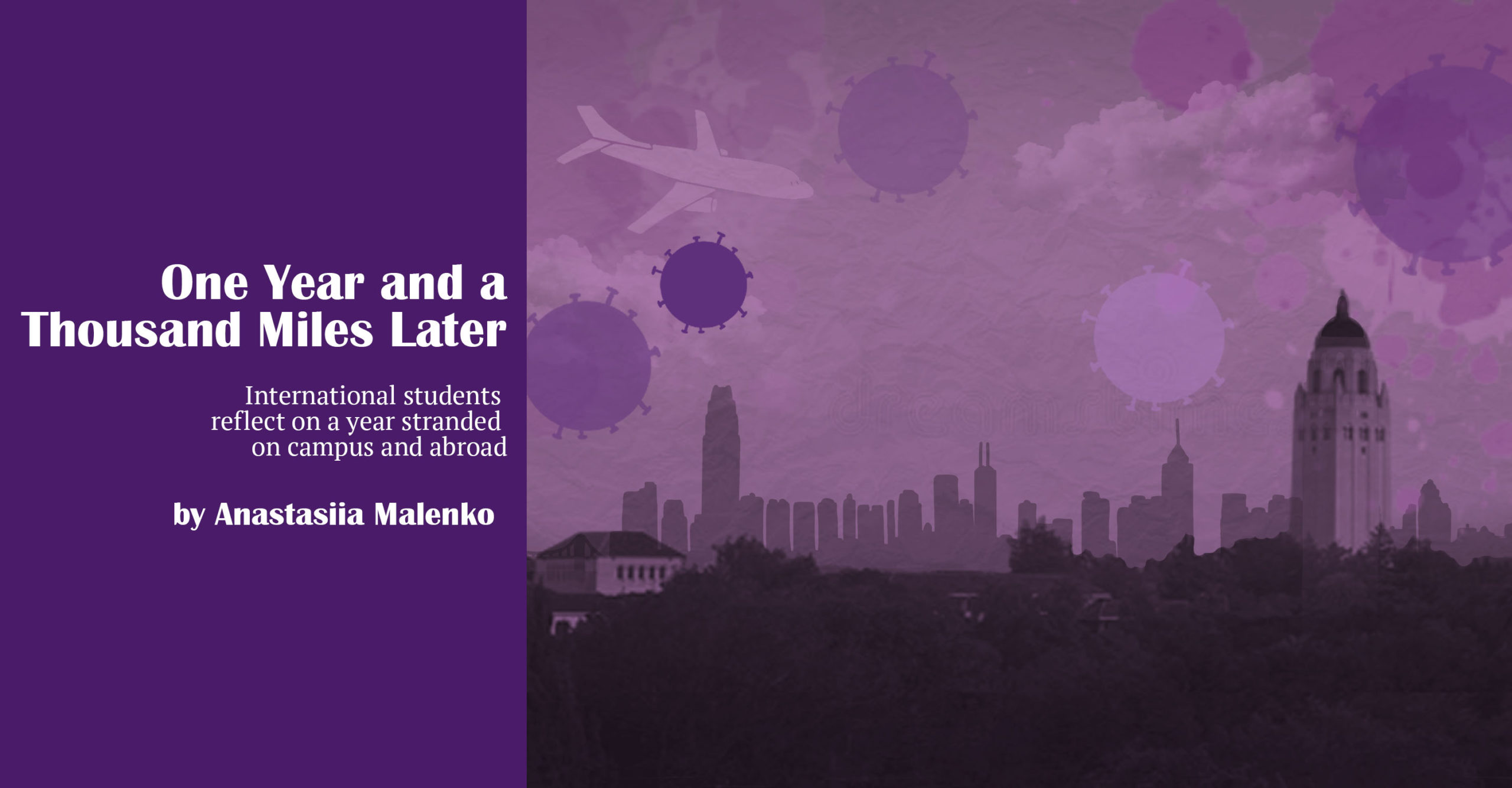 Like most other Stanford students, Rahma Ali ’23 did not expect the extended spring break to signal the end of in-person frosh year. As her peers packed up their carry-ons and left for home, Ali stayed on campus, watching everything shut down, including international borders. With no flights back to her home in Egypt available, a few questions popped up: “What is going to happen? When will I see my family again?”

The pandemic hit just as Stanford was beginning to feel more familiar. “By the end of the winter, I was like, yeah, maybe I’m getting the hang of social life things — I was kind of setting more goals for spring. But that never happened,” Ali said. The virtual events that came to replace social did not feel real.

But spring and summer on campus brought growth, too. One of Ali’s favorite memories came from a 19-mile hike in Yosemite — the longest in her life — that she completed during summer. Exploration of physical and mental resilience became the motto of her year.

“I think of myself as more capable to do things on my own just because like I’ve lived an entire year [abroad] and like, a part of it was a pandemic. I was on my own, and I fared well,” Ali said.

It wouldn’t be until five months later that Ali was able to return home  — the longest she has ever been away. There, she was able to regain some of the normalcy that had faded during her time in America: “It’s in my comfort zone, culture-wise, language-wise — everything just normal.”

But during the fall quarter, the 10-hour time difference between Stanford and Egypt made Ali nocturnal and convinced her to return to campus for winter. Upon coming back in January, she wasn’t even jet-lagged — a rare benefit of her schedule. The wish to be on her own and “have control over things” also helped to outweigh the fears of social isolation on campus.

Ryan Yu ’23 never got to go home to China. Living on campus since last March, he’s found ways to look on the bright side.

“How does it feel to be in Crothers? I feel excited,” Yu said. “I feel like I’m in college. It reminds me of my time in Burbank, and I loved that experience.”

Like many students who were allowed to remain on campus after the closures, Yu had to leave his frosh dorm in April to move to Branner. Then, the silence of the empty campus seemed new rather than eerie. The novelty of the environment and Stanford’s accommodations did not last long.

“In the fall, people are still racist. There is still COVID and [Stanford administrators] are like, ‘Let’s do letter grades,’” Yu said.

With few things left to do on campus, he delved into work for classes —  since “you’re always in your space, and you always have access to a laptop, right?” The focus on productivity caused more anxiety and less opportunities for social interactions.

“I would feel bad if I don’t do anything, because it feels as if everybody else is doing that. I just miss a support structure at home. With COVID here, it has gotten much harder to get it,” Yu said.

Yu is looking forward to spring, hopeful about regaining his support system: “I am excited for more people coming back to campus because I feel that at one point, this has to end. College atmosphere also helps academically and socially to de-stress and motivate you.”

Vy Thai ’23 has not gone home to Vietnam since 2019. After spending spring quarter on campus, he rented an apartment for the summer with his cousin in Houston. While this wasn’t Thai’s first time living away from family — he went to an American high school — the pandemic tested his independence further.

“Even though you live far away from home, you live on campus. You have a dining hall, you have a house to sleep,” Thai said. “You are independent, but, in some way, you are provided with all the necessary and basic needs that you don’t have to take care of.”

Living with his cousin, he had to pay the bills, cook and do grocery shopping. The things he did not consider while at Stanford turned out to be “a lot of work.” While his American peers had a lot of choices — “picking a gap year or working off-campus without being limited” — Thai explored the Curriculum Practicum Training opportunities, which permit him to work outside Stanford campus for a limited time.

He also had to stay up to date with the changing legal guidelines for international students in the U.S.

“You live here, but you don’t know — when you’re going to be, you know, deported or when the law is going to change. It’s really up in the air,” Thai said. “Even during a pandemic, you can be kicked out anytime.”

Like Yu, Thai relied on his support system to navigate the uncertainty, staying in touch with friends from frosh year and finding new communities: “Everyone’s struggling, so it’s really important for us to reach out to each other and … ask, ‘How are you doing?’”

Hope Yoon ’23 watched the pandemic take hold of the U.S. from home, in South Korea. She came back to Seoul after campus closures and had to adjust to a new sleeping schedule to accommodate classes that finished at 1:30 a.m. and resumed at 7 a.m.

The 17-hour time difference did not help her stay engaged with campus life, even remotely.

“Any community event, campus event, or just even a social call with your friends, is likely to be in a timezone when I can’t really make it,” Yoon said. “It’s either that, or I would have to live in a flip timezone, which a lot of my friends have tried, and it seems really terrible.”

Amid ICE summer policy changes, she felt lost, “googling for clues and sharing them in the group chats,” trying to reach a consensus with other international students when “no one truly knew what was happening.”

Going back home for Yoon meant surprising reunions and new paths to self-discovery. When she left for college, she thought that she and her high school friends “were never going to be in one place ever again.” But then everyone came back home. Spending more time with her home community also allowed Yoon to reshape the family dynamics of high school years, relying on them as a support system in a pandemic.

Deciding to take a break from studying made Yoon realize that “never before have I just put together my own year and figured out what to do.” Empowered by shaping her own experience, she found room to explore her ever-evolving passions.

“I’ve also discovered just through the experience of not being in school that I’m still at that stage where my interests are volatile,” Yoon said. “Everything being on hiatus has made me realize that I’m probably going to be less prone to trying to plan everything out ahead of time.”

Looking ahead, the experience of college during a pandemic, stuck abroad or on campus, will continue to impact everyone’s Stanford plans.

“I think I will be going into my junior year feeling that I’m a sophomore,” Ali said. “And I think [the pandemic] just made me appreciate the little things even more. When I remember biking to class, I’m like, ‘Wow, that was lively. ’”

Planning his post-pandemic experience at Stanford, Yu expects overcompensating, both academically and socially. Going from classroom to classroom and meeting his instructors will feel different, and remove the current state of “working on a laptop, [not knowing] what I did.”

Anastasiia Malenko is the Vol. 260 Magazine Editor. Originally from Ukraine, she focuses on politics and international student life in her coverage. In her free time, she loves listening to throwbacks and catching up on book and coffee recommendations. Contact her at amalenko 'at' stanforddaily.com.