‘No sleep till Big Game’: Stanford and Cal marching bands prepare for this year’s match 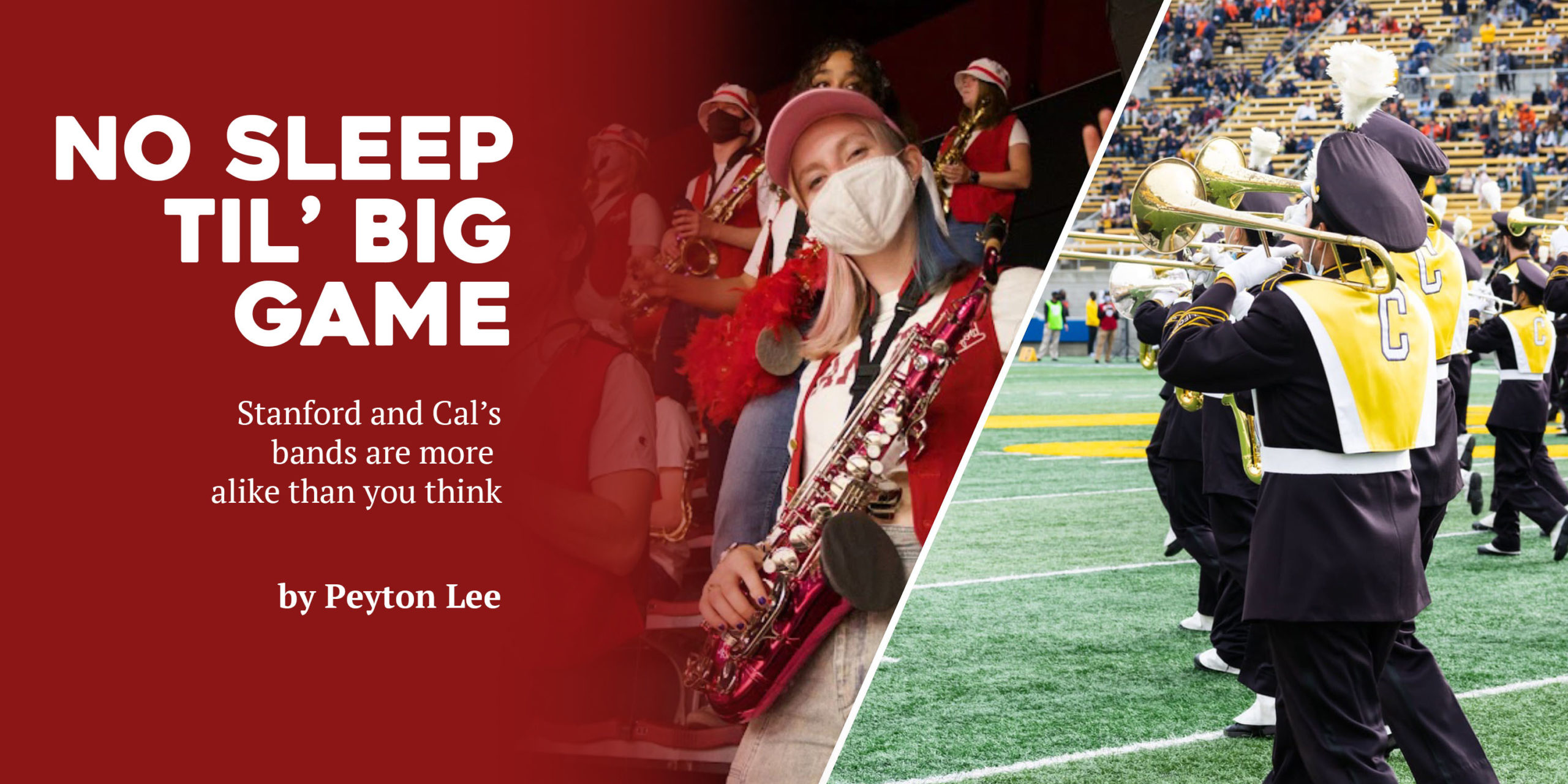 In anticipation of “Big Game,” the annual battle-of-the-Bay football match between Stanford and University of California at Berkeley, the two schools’ marching bands are working overtime for their most important event of the year.

Like the schools they represent, the Leland Stanford Junior University Marching Band (LSJUMB) and the University of California Marching Band (Cal Band) are similar in more ways than they like to acknowledge. To be sure, Cal Band is a 200-plus-member “military” ensemble while the LSJUMB “scatter band” boasts only a few dozen musicians. Still, as students from both organizations attest, the two are heartfelt, student-run groups with a surprising camaraderie on and off the field.

Both LSJUMB and Cal Band have packed schedules of rallies and pre-Big-Game traditions. On Monday, LSJUMB gathered in White Plaza to host their annual “Bearial,” a solemn mock funeral for Cal’s mascot Oski. On Wednesday morning up in Berkeley, Cal Band accompanied a chemistry professor as they ceremonially turned a red chemical blue for “Big Titration.”

On top of an increasingly intense rehearsal schedule, both bands play at events and rallies around the Bay the week before Big Game, including “Big Sail” and “Big Freeze.” Though in past years the bands have played together at a Big Game rally on Pier 39, this event has been canceled this year due to COVID-19. Still, despite virus restrictions, dozens of performances are occurring; the hectic week has inspired a common motto between the musicians: “no sleep until Big Game.” Clearly, the bands share common values and experiences beyond their ostensible differences.

“Despite the very unique styles, we really love each other’s company,” Cal trumpet player Irene Yoon ’22 said. “We both have the same goal in mind: we’re here to have fun, and we’re here to play music. It doesn’t matter which team wins, as long as we just get to do what we came here to do.”

Stanford trombone player Abby Taylor ’22 agreed with Yoon’s assessment of the rival bands’ surprisingly pleasant relationship: “I would say there’s not really any bad blood. I think it’s mostly just band nerds bonding with band nerds, honestly. We have a joking rivalry, of course, but ultimately, whenever we ‘battle them’ it’s really fun.”

The bands and their members pride themselves on each group’s unique ethos. Cal trumpet player Raj Dasani ’22 said that Cal Band’s military marching routines and uniforms make for a more traditional band experience. On top of that, Yoon described a robust student leadership team that facilitates empathy and efficiency simultaneously.

LSJUMB, on the other hand, enjoys a freer attitude toward tradition, instead preaching fun and accessibility as central tenets of the band experience. Saxophone player Stephanie Gady ’22 said new members don’t need experience at all.

“We accept all ability levels. A lot of people who joined my freshman year had never played saxophone before, or any instrument before,” Gady said. “I think [LSJUMB] is also designed to be a more fun experience and less intense, less of a sport.”

On the day of Big Game, expect both bands to bring their A-game. Dasani assures that Cal Band “saved the best [show] for last,” with their “Hopeless Romantic” Big Game set featuring a so-called “simpy” playlist of songs. LSJUMB has hits from Lil Nas X and Olivia Rodrigo ready for their performance, in addition to an “ambitious” field show that “will be really funny if we pull it off,” Taylor said.

Though Stanford won back the Axe in 2020, the last in-person Big Game saw Berkeley defeat Stanford at Stanford Stadium. Band members from both sides of the Bay are excited to return to the field where it all went down two years ago.

“Seeing fans from four years old to 104 and their reactions to winning that game, especially after nine, ten years… It was definitely something to see,” Dasani said, summing up the “out of body experience” of watching Cal’s 2019 victory as a Berkeley student. It is clear that the annual match has become culturally significant outside of mere game play.

“People really take pride in not only this game, but the school itself, being a part of this shared history that is Cal,” Dasani said. “So we’re going back there again; no matter what, there’s gonna be emotions flying high throughout the game.”

Peyton Lee '24 is a Managing Editor for The Stanford Daily's Arts & Life section. His interest is classical music performance, but he also enjoys pop, R&B, and jazz. Contact Peyton at plee 'at' stanforddaily.com