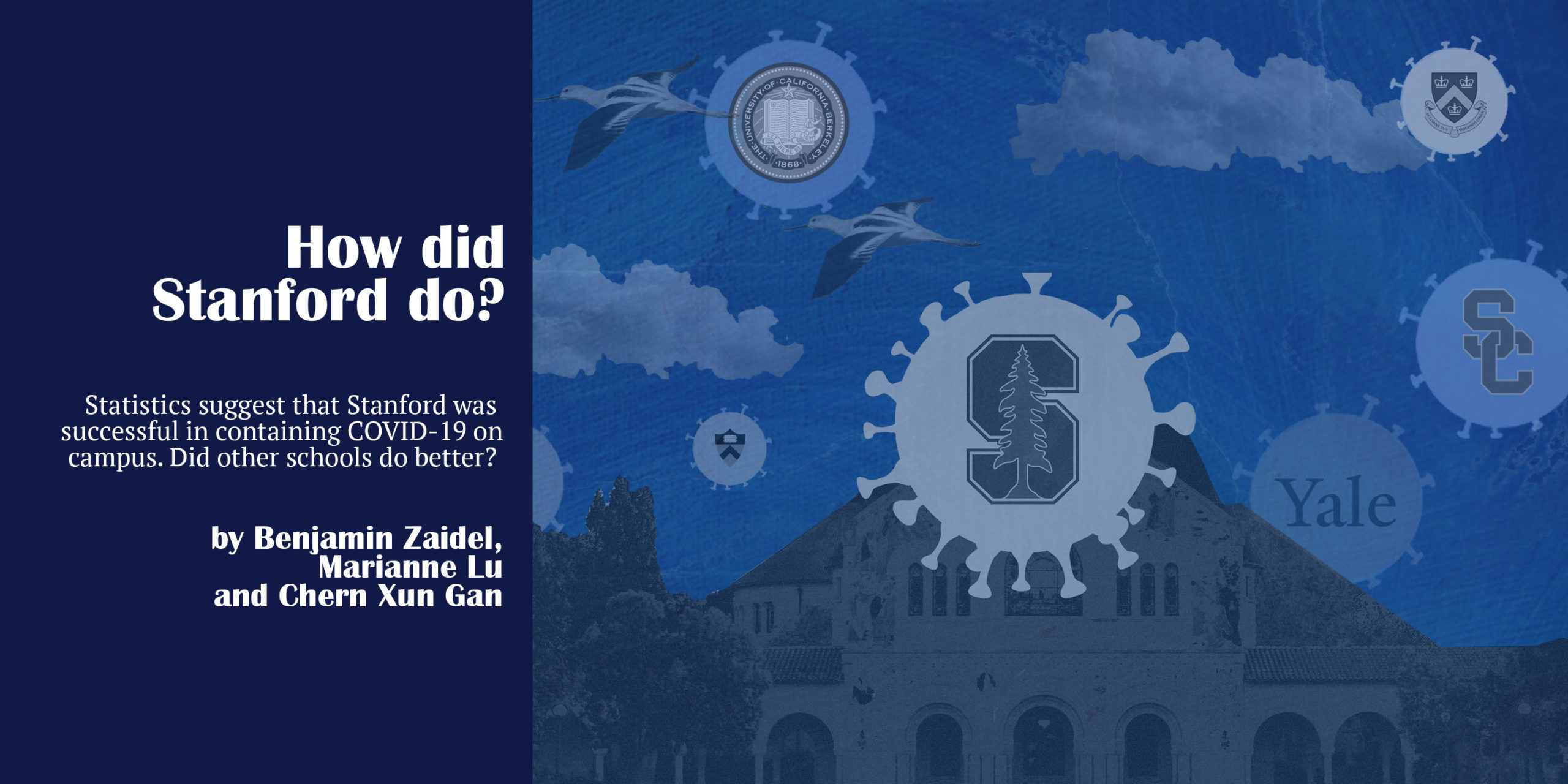 Amid the coronavirus pandemic, schools have done their best to adapt to a year filled with uncertainty. The decision of whether or not to bring students back to campus has been one of the most contested debates at Stanford and at the University’s peer institutions.

In March 2020, Stanford joined other universities in canceling in-person classes to prevent the spread of coronavirus. On March 9, all classes were moved online for the last two weeks of winter quarter. The next day, the University asked all undergraduates to leave campus and announced that classes would meet online “until further notice.”

At the end of the spring quarter, Stanford announced plans to invite half of the undergraduate student body to campus for each quarter of the next academic year, starting with frosh, sophomores and new transfer students in the fall. However, this plan was canceled in August, and only students with special circumstances were allowed to return. In November, Stanford reaffirmed its commitment to offering on-campus housing to freshmen and sophomores for the winter quarter, but abruptly canceled those plans two days before it began.

COVID-19 cases at Stanford have remained relatively low over the past year — weekly new cases remained low throughout 2020 and, after a spike of cases in January, returned to single digits in February. Despite this, students have reported large gatherings on campus throughout the year in violation of Stanford’s COVID-19 policies.

Among these institutions, Brown, Dartmouth, Yale and USC all allowed undergraduates to return to campus in the fall. Brown introduced a phased approach and eventually brought the majority of students back to campus for in-person classes. Yale allowed frosh, juniors and seniors back. Dartmouth gave frosh and juniors priority. Berkeley offered on-campus housing for up to 6,500 people, prioritizing those who had selected on-campus housing as their best option. Stanford, USC, Columbia and Princeton invited only students with special circumstances back on campus.

Starting this January, however, each school differed in their approach: Qhile Stanford and USC’s campuses remained mostly empty, Princeton invited the entire undergraduate cohort back to campus; approximately 2,887 Princetonian undergraduates are living on campus, and about 670 are living locally. Columbia has brought seniors and juniors back on campus. Brown allowed a larger number of undergraduates, including first-years, to return to campus, announcing that “all students who wish to return in the spring will be able to do so.” Dartmouth prioritized seniors. Yale invited sophomores, juniors and seniors back.

Most schools were able to keep their rate of positive COVID-19 tests under 1% throughout the fall and winter. USC and Berkeley both surpassed a 1% positivity rate multiple times, while Stanford and Columbia rose above the threshold only once. Princeton and Brown never exceeded a positivity rate of 0.52%.

By the last week of February, 3,726 students total had tested positive for the virus between all eight of the aforementioned schools. Data on cumulative cases show that no school has remained truly COVID free, with all eight schools demonstrating an increase in cases over the seven-month period. With that being said, many schools experienced a stagnation in new cases throughout the month of December.

A total of 191 Stanford undergraduates have tested positive for the virus since June 2020, though the University’s positivity rate never surpassed 1% after August — comparing favorably against most of the other institutions analyzed. Although Stanford’s case numbers have remained relatively low throughout the past few months, they spiked at the beginning of this year. This mirrored a spike in cases in the Bay Area during the same time frame and developments in many other schools: Berkeley also saw a spike in cases at the end of January after inviting students to return on Jan. 28, two weeks after the start of their spring semester. Brown experienced a similar winter spike, with 39 new cases and a 0.33% positivity rate in the third week of February.

Out of the schools examined, USC and Berkeley fared the worst regarding case counts and positivity rates. USC’s cumulative total of 1,579 positive undergraduate cases makes up around 42% of all positive test results between all 8 schools. Their largest single spike, with a 6.38% positivity rate, occurred in August when no other schools were experiencing large COVID-19 case increases. USC students suggested to The Daily that most of the positive test results came from the school’s Gateway apartments, an off-campus housing complex where many students attended parties and gatherings in close proximity.

In contrast, Princeton, Dartmouth and Brown have followed very similar trajectories in COVID-19 cases to Stanford. In positivity percentage, Princeton performed comparably to Stanford last fall. Stanford’s percentages have been mostly lower than Princeton’s this winter, but Princeton brought back its entire undergraduate cohort, approximately 2,887 students, in January. Given this decision, their positive test results are relatively low, having stayed under 0.4% thus far. Princeton experienced its record-high 34 cases in the last week of January.

Lindsay Wu ’24, a Stanford frosh who has yet to arrive on campus, spent the winter with a friend at Dartmouth and was able to compare her experience on the East Coast with Stanford’s policies. Dartmouth implemented a similar plan to Stanford’s, with four quarters of instruction and two cohorts of students on campus each quarter.

Wu pointed out the similarities in both universities’ planning but noted that her friend at Dartmouth was able to return to campus in the fall, whereas Stanford canceled plans meant to welcome incoming frosh and sophomores. “Because she was on campus for fall, she had the opportunity to meet other freshmen in person through more conventional ways, like getting to know others in her dorm or meeting friends of friends spontaneously,” Wu said. “And despite Dartmouth’s COVID restrictions, she came home with a really close-knit group of friends, as well as a lot of other contacts.”

“I’m definitely less connected to Stanford socially than my friend is to Dartmouth, just because of the nature of being together in person,” she added. “So I think her ten weeks on campus made all the difference.”

Wu also noted that Dartmouth’s schedule allows its frosh to spend much more time on campus this year than Stanford’s. “Dartmouth’s freshmen are going back to campus for spring quarter,” she said. “So though my friend doesn’t feel that she’s had a full freshman experience by any means, she knows that she only lost one quarter on campus while Stanford freshmen have missed the entirety of the traditional academic year.”

Students from Yale, UC Berkeley and Columbia interviewed by The Daily spoke positively of their school’s COVID-19 responses. While many of Stanford’s policies during the pandemic have raised scrutiny, University researchers and professors agreed that Stanford’s cancellation of winter quarter programming was the safest decision from a public-health standpoint, which was reflected by its low testing positivity rate throughout the year. Other universities like Brown and Yale, however, were able to keep case counts and positivity rates similarly low while inviting more of their undergraduate populations back to campus.

Stanford’s last-minute decision to cancel plans also contrasted with peer universities’ announcements, which communicated revisions to schedules ahead of time. And although most schools were able to find a way to give frosh a taste of on-campus living, students from Stanford’s Class of 2024 still have yet to experience life on the Farm. Barring further restrictions imposed by the University, frosh and sophomores are expected to be welcomed back to campus for the summer quarter.

Benjamin Zaidel ’24 is a desk editor for the Daily interested in studying Bioengineering. A Los Angeles native, Benjamin believes that 68 degrees should count as sweater weather. Contact him at bzaidel 'at' stanforddaily.com.Chern Xun Gan ’23 is a writer for Academic News.